FLETCHER GIVEN ALL-CLEAR TO RESUME FULL TRAINING AFTER HEAD INJURY

Nottinghamshire seam bowler Luke Fletcher has been given the all-clear by his hospital consultant to resume full training.

He can return to all activities from January 8 – exactly six months after sustaining a serious head injury when hit by a Sam Hain drive in a T20 Blast game at Birmingham Bears.

Fletcher, nicknamed the Bulwell Bomber, is already back bowling at wickets in the nets but will be able to take part in complete sessions, including batting, come the New Year.

“It’s nice to get the official word that everything is OK.” Luke Fletcher.

The 29-year-old, currently taking a level 3 coaching qualification, will also return to driving, having ridden to the ground on his bike for much of the autumn.

“It’s very pleasing to finally get the nod to start full training again,” said Fletcher. “I’ve felt pretty good throughout once things settled down, but it’s nice to get the official word that everything is OK.

“It’s great to be able to play football again with the rest of the lads, face bowling in the nets and ease back into my programme.

“The consultant says he’s really happy with how things are looking. I have passed all the computer tests I have been doing at the hospital and there has been improvement since the injury back in July. 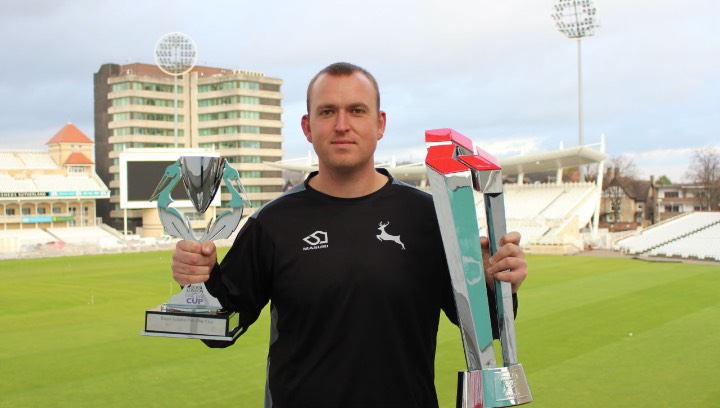 “I want to thank (physiotherapist) James Pipe, who has been brilliant from day one. I can’t really thank him enough for everything he has done.”

Pipe helped Fletcher from the field when the incident happened before accompanying him to Birmingham’s Queen Elizabeth Hospital.

He is delighted with the way the player has bounced back from his injury, which forced him to miss the second half of the season, during which time the Club won the NatWest T20 Blast and promotion to Division One of the County Championship.

“How Fletch has reacted to the situation is a real testament to his professionalism and a mark of the man.” Notts physio David Pipe

Pipe said: “How Fletch has reacted to the situation is a real testament to his professionalism and a mark of the man.

“He’s shown his physical as well as mental strength to come through this as he has done in what has been a difficult journey.

“Throughout it all, he has been upbeat and stayed very positive, coming in with a smile on his face. He’s been the perfect patient.”