FRANKS: BALL AND GURNEY DESERVE ALL THE PRAISE

Assistant Head Coach Paul Franks says the wicket-laden final day of Nottinghamshire’s season-opening victory over Lancashire – inspired by seam bowlers Jake Ball and Harry Gurney – was the fastest he had ever seen a game develop.

Franks enjoyed a 18-year playing career at Trent Bridge during which time he took 524 first-class wickets and scored more than 7,000 runs in some 215 matches.

But never has he seen such fireworks as the culmination of Notts’ six wicket success in their opening Specsavers County Championship game of the season at Emirates Old Trafford, where Lancashire were bowled out for 73 in their second innings, having started the day on 58-2.

“I have never seen a game move on so fast for so few runs – 25 runs for 12 wickets over the course of a morning session.”

“I have never seen a game move on so fast for so few runs – 25 runs for 12 wickets over the course of a morning session is freakish and extreme,” said Franks.

“With everything that went on we were delighted with the win and move into the next game with confidence, albeit with plenty of areas still to improve.

“Both Jake and Harry were extremely impressive. They set a very important tone and were very aware what was required going into that last day.

“I don’t think anyone expected the game to move on at quite the speed it did, but the quality of the bowling supported by some world-class catching made that happen.” 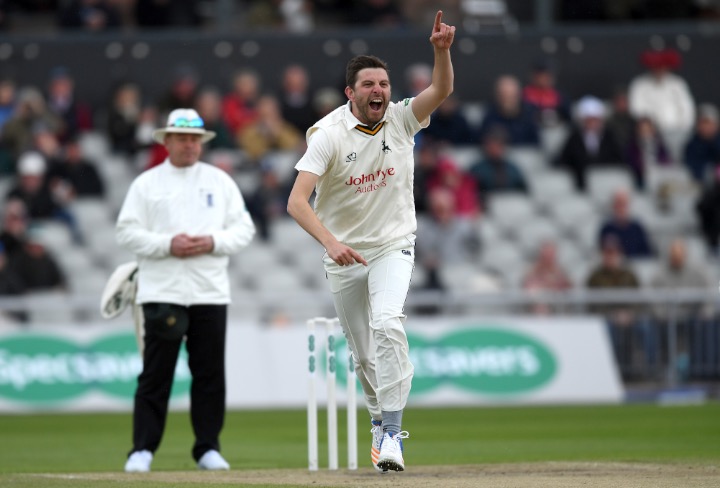 Franks knew that skittling a side out was always possible in such bowler-friendly conditions, and was just glad Notts were on the right side of that experience.

The win over last year’s second placed finishers in the four-day competition, which yielded 20 points, is a welcome boost ahead of Friday’s game against Yorkshire at Headingley.

Franks added: “The ball had missed the edge quite a lot throughout the game with players from both sides playing and missing consistently.

“But there was a feeling that if you were to get on a roll that you could take wickets quickly in little clusters. That was a big cluster and they complemented each other brilliantly.

“The lengths were aggressive… they were prepared to pitch the ball up and brings the stumps into the game.”

“There were very runs on offer in terms of the balls Jake and Harry bowled in between the wickets and they certainly deserve all the credit that has been coming their way and they’re certainly optimistic about the coming weeks and what they can produce.

“The lengths were aggressive… they were prepared to pitch the ball up and brings the stumps into the game, which is one of our mantras. The bowling coach and rest of the staff are very supportive of our bowlers getting it up onto that type of length, particularly in those conditions, and I thought we exploited it brilliantly.

“Groundsman can be quite cautious at this time of the year and over-prepare pitches that can be quite flat. That was not the case here, and we saw that batting was difficult all around the country with runs at a premium.

“It’s not surprising after the wet weather we’ve had, but over the course of the season the contest (between bat and ball) is likely to become a little more even and we have to be ready for that.”