MOORES DELIGHTED TO GET CHAMPIONSHIP CHANCE WITH GLOVES

Tom Moores has admitted that he has enjoyed getting hold of the wicketkeeping gloves in Specsavers County Championship cricket for the first time for Nottinghamshire.

The 21-year old has played five first-class matches for the county before this one, but none have been behind the stumps.

Moores took two catches off Harry Gurney’s bowling as Lancashire moved on to 58-2 in their second innings before an early close on day three because of bad weather.

It leaves the Red Rose County trailing by six runs after Notts had been dismissed for 222 in their first innings earlier in the day.

“It’s been great to get out there and to get my first catch and get up and running.”

“It’s been great to get out there and to get my first catch and get up and running,” said Moores. “The lads are in a good spot and as a team we’ve been trying to string good balls together and create wickets.

“The lads bowled magnificently in the first innings and did it again today, so to get a couple of catches was great again.

“We think we’re in a good position. It’s one of those wickets where if you bowl well you get rewards. We’ll now just have to see where we can get to in this game.”

In between keeping tidily in both of Lancashire’s innings, Moores put together a well-crafted innings of 38 when it was most needed. 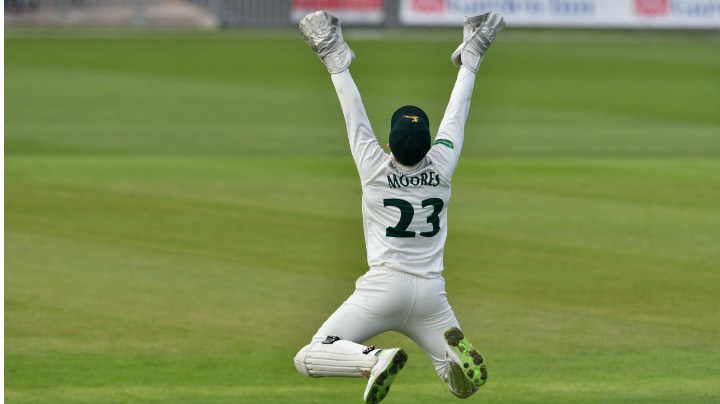 He put on 82 for the sixth wicket with innings top scorer with 44, Riki Wessels, in a match where no batsman has yet passed 50.

Moores added: “I think the key is for me to do the stuff that is right for the team. I had to dig in and it was all about batting time and then to score a few runs and spend some time in the middle to put us in a good position.

“It was nice to bat with Riki (Wessels) and sometimes to score a few runs means I can take confidence into my ‘keeping – and vice versa.”

Moores was very watchful for most of his time at the crease but unleashed a couple of delightful shots, including an enormous leg side six, when Keaton Jennings entered the attack.

“I had to bide my time a little bit and I was one off 30 balls for a time, which is unlike me.”

“It was nothing personal against Keaton,” he said. “I was just trying to sense the moment when it was right to put my foot down and take it to the opposition.

“I had to bide my time a little bit and I was one off 30 balls for a time, which is unlike me. So, I had to stick in there and wait until I had the chance to throw some punches back.

“It just happened to be Keaton. I was just trying to be positive and put the team into a good position and put some pressure on the opposition.”