India produced their best day of the series so far as they backed up their first innings score with a fine bowling display on the second day of the Third Specsavers Test match at Trent Bridge.

Having posted 329 all out in their first innings, Hardik Pandya led the bowling charge, taking 5-28 as England were bowled out for just 161, a first innings deficit of 168.

India’s top order then piled on further misery for the hosts, adding a further 124 runs before the close, for the loss of just Lokesh Rahul and Shikhar Dhawan.

Resuming this morning on 307-6 at 11:30am after a short rain delay, James Anderson and Stuart Broad used the conditions to their advantage to ensure India didn’t get away.

A fired-up Broad first removed debutant Rishabh Pant, who chopped on for 24, before he then produced a sublime inswinger to uproot the middle stump of Ravi Ashwin on 14, leaving India 326-8. 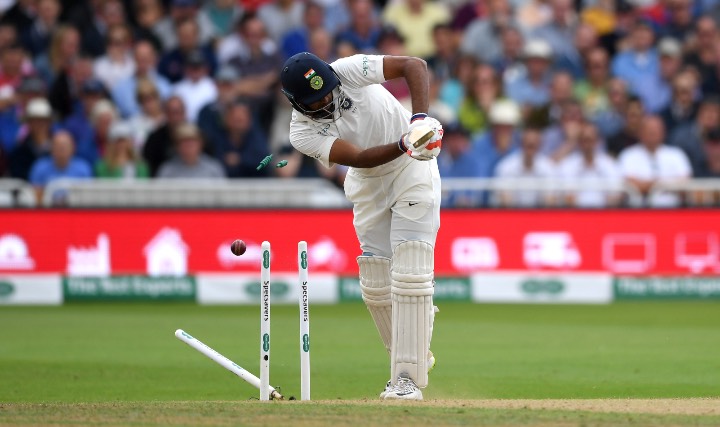 Broad continued to contribute to the India collapse, turning catcher for James Anderson, as Mohammed Shami holed out for just three before the Burnley Express took wicket number 63 at Trent Bridge, beating Jasprit Bumrah all ends up with a superb delivery, India all out for 329.

A testing 40-minute session to lunch then greeted the England openers, but Alastair Cook and Keaton Jennings reached the interval unscathed, before the afternoon session proved to be the undoing of the home side.

From 46-0 at lunch, England lost all ten wickets in the afternoon session to fall to 161 all out by tea.

Alastair Cook (29) and Keaton Jennings (20) both fell with the score on 54, to Ishant Sharma and Jasprit Bumrah respectively.

Sharma then added Ollie Pope (10) to his haul before it became the Hardik Pandya show.

Either side of Shami removing Ben Stokes to take his second wicket, Pandya took five England wickets in just five overs to take his maiden five-wicket haul in Test cricket. 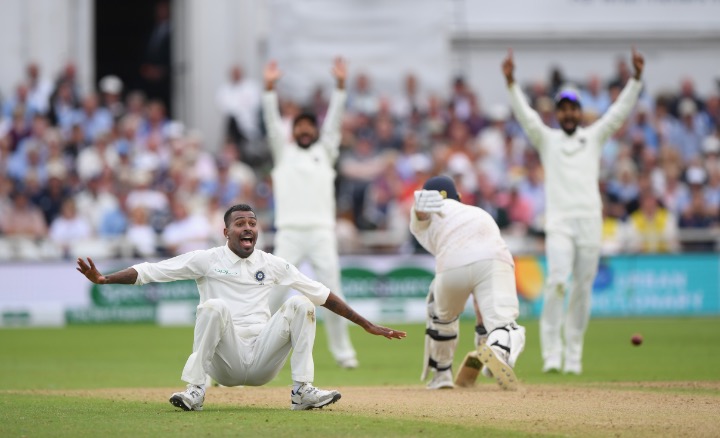 James Anderson joined Jos Buttler, and the England vice-captain had a little bit of fun with the Indian bowlers, striking 39 off just 32 balls, including three boundaries and two sixes, England eventually all out for 161.

Dhawan and Rahul then batted with the confidence of a team 168 runs ahead after the first innings, quickly bringing up a fifty-run opening stand.

Stokes bowled Rahul for a brisk 36, off just 33 balls, and Dhawan was outfoxed by Rashid to be stumped for 44 Cheteshwar Pujara and Virat Kohli took the visitors to 124-2 at the close of play, leading by 292, as England were left to look back on their worst day of the series so far.

Day three of the Third Specsavers Test is sold out, but tickets still remain available for day four, starting from £20. Secure your seats by clicking here...

Woakes Happy With England’s Efforts On Even First Day