In the first of a two-part feature, our Academy Player of the Month, Liam Patterson-White, tells trentbridge.co.uk how his role on the cricket field might have followed an entirely different path…

Liam Patterson-White could just have easily grown up trying to emulate the achievements of Chris Read rather than those of another former Nottinghamshire and England player, Graeme Swann.

Now a left-arm spinner and hard-hitting batsman, the Sunderland-born but Basford bred player’s introduction to cricket came through his dad, Dan, who was a keen wicket-keeper.

“I tried bowling seam, but wasn’t getting much success. My dad then told me to try spin and I did.”

It seemed only natural at first for the now 19-year-old to follow in his father’s footsteps and don the gloves, especially as he was given plenty of helpful tips along the way, but eventually ‘he got a bit bored’ and so opted to try his hand at bowling.

Patterson-White quickly realised that seam bowling was not for him, but he found spin bowling a much more alluring proposition – and has been a keen student of the art ever since.

“I started off with my dad, playing local league cricket in a low division,” he explains, still perspiring from the net he has just taken with Club coaches Ant Botha and Tim Boon. “He was a wicket-keeper and started teaching me about that at first, but I soon wanted to have a go at something else.

“So I tried bowling seam when I was about seven or eight, and enjoyed it, but wasn’t getting much success. My dad then told me to try spin and I did. 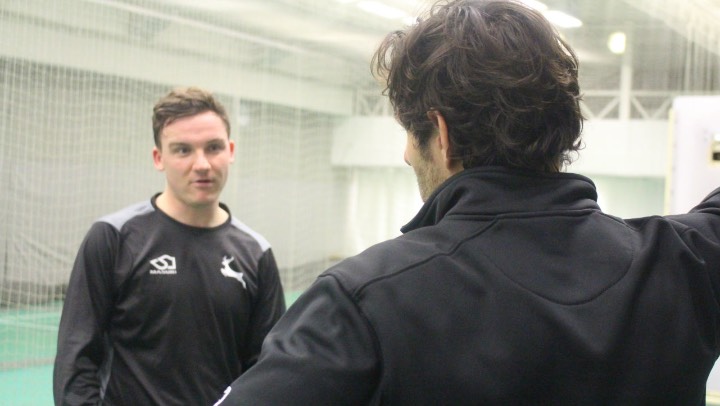 “My first club was Basford Mill in the Bassetlaw League and in my first over in adult cricket I took two or three wickets. It was only my second bowling spin apart from being in the nets, and from then on it was quite a good way for me to get into cricket. It was really good fun.”

A move of club to Notts and Arnold Amateurs followed in his early teens, where he stayed until he was ’17 or 18’ and now he plays his club cricket at Farnsfield, where current Assistant Head Coach Paul Franks developed his skills.

From a schools perspective, he studied at Ellis Guilford School in Basford from year seven to year 10 and then went to Worksop College for two years.

“I can concentrate all my efforts for this year on my cricket, which makes it really important.”

But although keen on his studies, being picked up by the Nottinghamshire Academy – after being recommended for Trent Bridge trials by a senior coach at Basford Mill –  meant he wanted a sustained period to focus on his cricket and maximise his chances of engineering a career in the game.

He says: “Cricket wasn’t working for me alongside A levels, so I decided to do a BTEC in sport at Notts College in Clifton. I have done one year there, but not completed the second, but the option is to go back there and do a second year if I want to.

“By doing that I can concentrate all my efforts for this year on my cricket, which makes it really important. I haven’t got education to take me away from cricket, so I can just focus purely on my game and for me, which, at this moment and where I’m trying to go, is really important.

“I’m full-time now, going in four days a week with the pros. It’s time for me to put a proper shift in and show what I’ve got.” 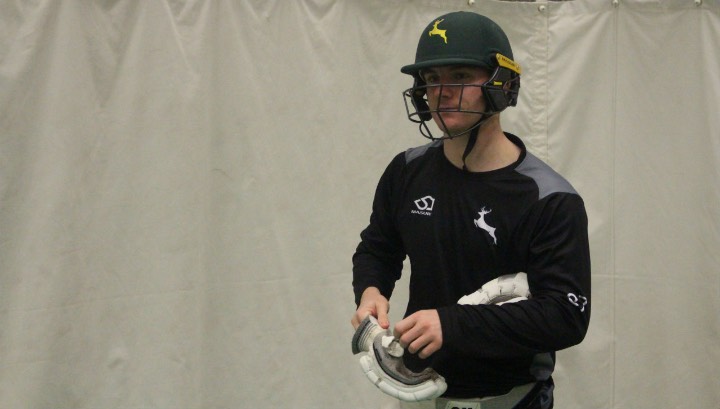 Patterson-White has certainly come a long way since his early days at Trent Bridge and last summer was chosen for three England Under-19s Youth ODI against India.

He is enjoying mixing it with the senior players and hopes he can impress enough to go on the Club’s pre-season tour to Potchefstroom, South Africa in March.

Patterson-White adds: “I went to an under-10 trial and I didn’t get in but the next year at under-11s I did get in and from there I have gone through the age groups, worked my way onto the EPP (England Performance Programme) and then the Academy.

“There is a possibility I could be going on the South Africa tour, so I’m just trying to push my case.”

“Now I’m going to some first-team training, so hopefully I can keep progressing. It’s been a really good experience training with them, but I feel like I need to find my place a bit more as it’s only been this winter I’ve been with them.

“There is a possibility I could be going on the South Africa tour but it’s not been decided fully yet, so I’m just trying to push my case as best I can at the minute.

“If I could, I think that would be a very good experience to have those players around me for that length of time. The senior and young pros would be able to help me find my place.”