With 500 days to go until the ICC Cricket World Cup 2019 kicks off in England and Wales, it’s time to delve into an exclusive club: those who’ve scored 500 runs at a single edition of the tournament.

Across the previous eleven editions of the Cricket World Cup, on only eight occasions has a player reached the milestone of 500 runs, highlighting the exclusivity of the club. 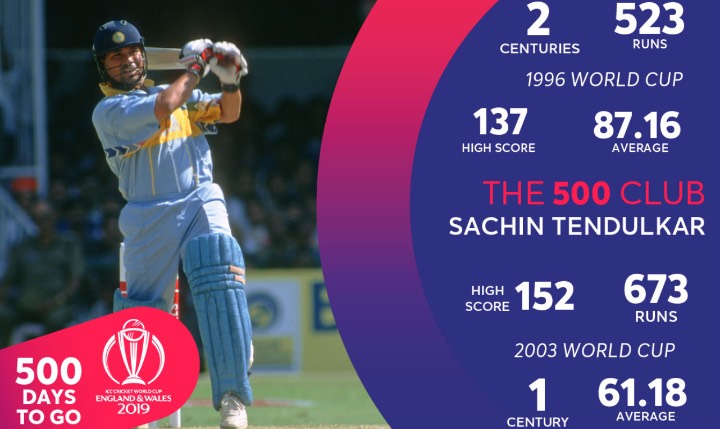 The only man to have reached 500 runs at a World Cup twice, it had to be the Little Master!

1996 was Tendulkar’s second appearance at a Cricket World Cup, having made his debut in 1992, and he was in sensational form, racking up 523 runs across seven innings at an average of 87.16. He hit two centuries – 127* vs Kenya and 137 vs Sri Lanka – as well as scores of 70, 90 and 65 against West Indies, Australia and Sri Lanka to finish top of the run-scoring charts at the tournament.

2003 was even more fruitful for the Indian legend, as he amassed a record amount of runs at a single edition of the Cricket World Cup. He hit a century and six half-centuries on his way to finishing the tournament on a staggering 673 runs from 11 innings. His highest score came against Namibia (152), and he could well have added two more centuries had he not fallen for 98 and 97 against Pakistan and Sri Lanka respectively.

Matthew Hayden was in sensational form in 2007, as his 659 runs proved crucial in Australia winning their third Cricket World Cup title in a row.

He hit three centuries and a half-century at the tournament, batting at a strike-rate of over 100 across ten innings.

His half-century came against Scotland, before hitting consecutive hundreds against South Africa (101) and West Indies (158). His tons were followed by handy scores of 47*, 41 and 41, before he again reached three figures, this time scoring 103 against New Zealand.

He then hit 41 against South Africa before scoring 38 in the final against Sri Lanka in Bridgetown. 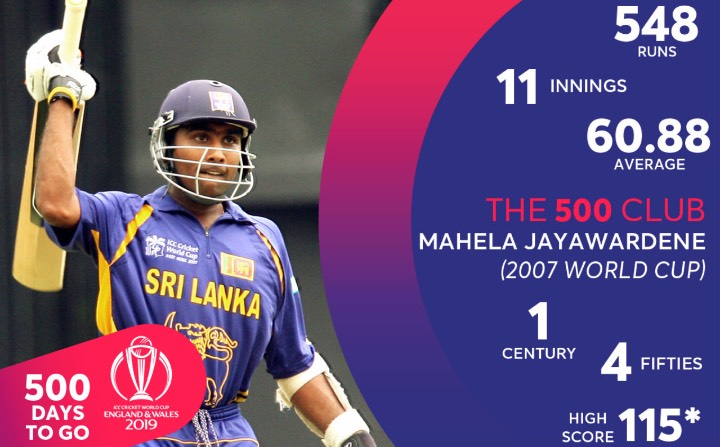 Central to Sri Lanka’s journey to the Final in 2007 was captain Mahela Jayawardene, who led by example with his run-scoring exploits at the tournament.

Jayawardene finished the World Cup in 2007 with 548 runs, the second-most at the tournament. He struck a century and four fifties at an average of 60.88.

He opened the tournament with 85 against Bermuda, and followed it with 46 against Bangladesh. Back-to-back fifties came against West Indies (82) and England (56), before a score of 72 against Australia.

With a place in the Final at stake, Jayawardene then hit a marvellous unbeaten 115 against New Zealand to help lead his side to the Final. 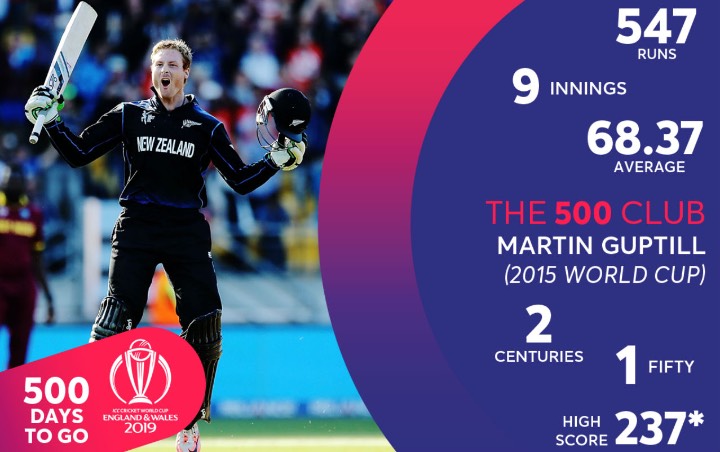 New Zealand’s Martin Guptill scored 547 runs at the ICC Cricket World Cup 2015, with 237 of them coming in a truly sensational innings against West Indies.

Guptill opened his CWC15 account with 49 against Sri Lanka, and passed fifty for the first time against Afghanistan. He then scored his first World Cup century, reaching 105 against Bangladesh in Hamilton.

Wellington was the scene for his main act though, smashing 24 fours and 11 sixes in unbeaten knock of 237 from just 163 balls, creating history for the highest-ever World Cup score in the process. 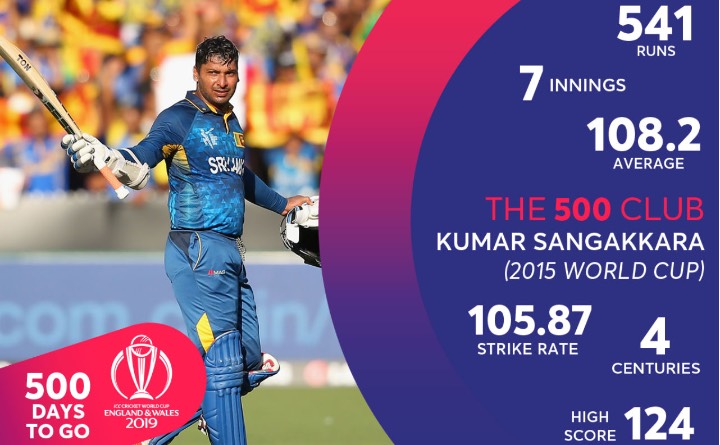 Kumar Sangakkara made history in 2015, as he became the first man to hit four consecutive centuries at a Cricket World Cup.

The Sri Lankan legend finished the tournament on 541 runs, with an astonishing average of 108.2.

His remarkable run of centuries started with 105* against Bangladesh, and was quickly followed by another unbeaten ton, 117* vs England. Australia were next to feel his force as he scored 104 in Sydney, with the record-breaking fourth century coming against Scotland, as he finished on 124 from just 95 balls.

He finished with a score of 45 against South Africa to take his tournament tally to 541, his best-ever return at the World Cup. 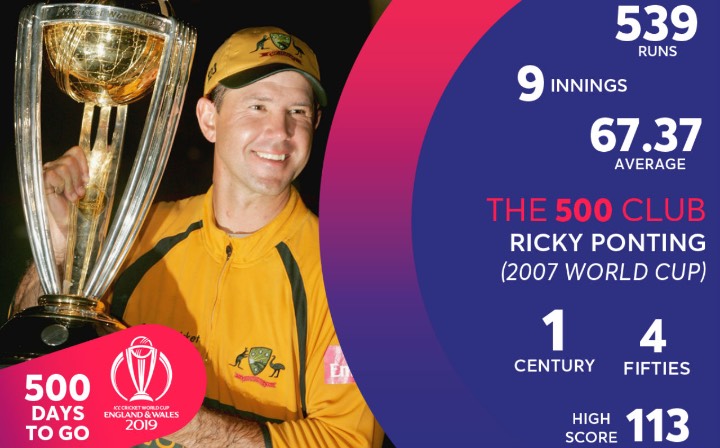 Ricky Ponting scored a century and four half-centuries as he led Australia to their third consecutive Cricket World Cup triumph in 2007.

The Australia captain racked up 539 runs across nine innings at the 2007 edition, with his runs coming at an average of 67.37.

Ponting’s century came in the first game of the tournament, when he scored 113 against Scotland. He came close to making it to three figures on two other occasions, making 91 against South Africa and 86 against England.

He followed his half-century against England with two more in consecutive games, making 66* against Sri Lanka and 66 against New Zealand.

He scored two centuries and two half-centuries in Sri Lanka’s run to the Final, and his creative run-scoring at the top of the order was pivotal to his side’s success at the tournament.

Dilshan started the World Cup in 2011 with a score of 50 against Canada, and followed it with 41 and 44 against Pakistan and Kenya respectively. His biggest score came against Zimbabwe, as he hit 144 off 131 balls, with his second century – 108* vs England – coming two games later.

He then hit 73 in the Semi-Final against New Zealand to help his side into the final, before scoring 33 against India.

Who will be the eighth player to join the 500 club? Will it happen during the ICC Cricket World Cup 2019 in England and Wales? Make sure you are there to find out by registering for priority access to the ballot on 1 May 2018.