Alex Hales is determined to use the familiar stage of Trent Bridge to bolster his chances of earning a place in England’s squad for next year’s ICC Cricket World Cup when England take on Australia tomorrow in the third Royal London One-Day International.

Although a regular opener for the Notts Outlaws, the right-hander has been unable to secure a place in the side in his favourite position because of the form of Jason Roy and Jonny Bairstow.

However, an injury to all-rounder Ben Stokes, who has now been ruled out for the series, has given Hales an opportunity to bat at in the number three slot during the series, which the hosts lead 2-0.

And it is one the Outlaws’ number 10 intends to take make the most of with a big score in familiar surroundings.

“Looking at the way it is at the moment, it will probably happen that I will drop out for Ben when he’s fit,” said Hales. “But it can change quickly, as we’ve seen in the last year or two. It’s up to me to use these three games well and to score as many runs as possible.

“I’m in the position where I’m on the fringes and any chance I get it’s up to me to convert big runs.

“There is pressure (on me) because I want to try to get my place back. Jason Roy and Jonny Bairstow have come in and done really well since the West Indies series.

“I’m in the position where I’m on the fringes and any chance I get it’s up to me to convert big runs and put pressure on those two.”

“The World Cup squad is my aim, but there are players not in the 15 at the moment who are seriously talented players. It’s good healthy competition, which keeps everyone on their toes and striving to improve.

“If I could pick a venue to bat at, then Trent Bridge would be it, particularly in white ball cricket. I want to put on a big performance because I’m desperate to score some runs, particularly on my home ground.

“There is a bit of added pressure of wanting to please the home fans who you play in front of week in and week out. You always want to impress in your home city, but I’m lucky enough to have a decent record here.” 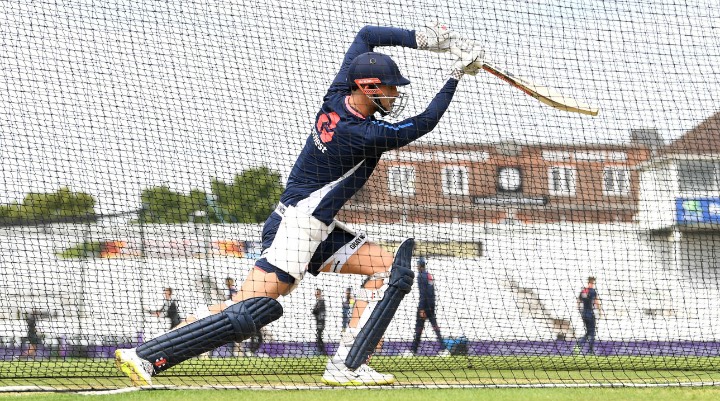 Hales hit 52 in the one-off ODI against Scotland, which England lost, and has registered scores of 5 and 26 against Australia so far.

He admits he’s yet to hit full stride in this 50-over summer, but is convinced a big score is just around the corner, having hit a then England ODI best of 171 at Trent Bridge against Pakistan in 2016.

Hales added: “We were disappointed not to get over the line against Scotland and I got in a good position there and gave it away a little bit.

“I’m searching for my form a little bit, but in the nets I’ve been practising pretty well and feel confident.

“Mentally I feel pretty good and hopefully I can turn things around tomorrow.”

“I’m searching for my form a little bit, but in the nets I’ve been practising pretty well and feel confident.”

Hales admits that he would rather open then bat at number three, but is just pleased to be in the team.

“You have to handle the mindset of potentially being in second ball or being in after 30 overs,” he said.

“It’s something I have done before for England when I first got into the team and it’s nothing too new to me.

“I enjoy opening more, but it’s important to be flexible with the team we have got now.”