The match – part of a double header that is the last leg of a trip commemorating the original Aboriginal tour 150 years ago in 1868 – saw the hosts win the toss and bat first.

But first a ceremony saw the unveiling of an Aboriginal silk by pupils from West Bridgford Infants School and the two teams walked down the Pavilion steps before lining-up to listen to introductory words from Aboriginal mentor Peter Cooley.

Once the action got underway, England were soon in the runs, with opener Smith and partner Emma Lamb (31) powering along to post an opening stand of 79.

Smith hit her runs off 54 balls with 10 fours and two sixes, while Lamb also found the boundary rope six times.

Wilson then kept the momentum going with a fast-paced 31-ball knock that contained 13 fours and two sixes.

England lost wickets late in their innings, as visiting captain Ashleigh Gardner claimed 3-38 while Hannah Darlington took 2-48, but the hosts nevertheless racked up an impressive 228-5. 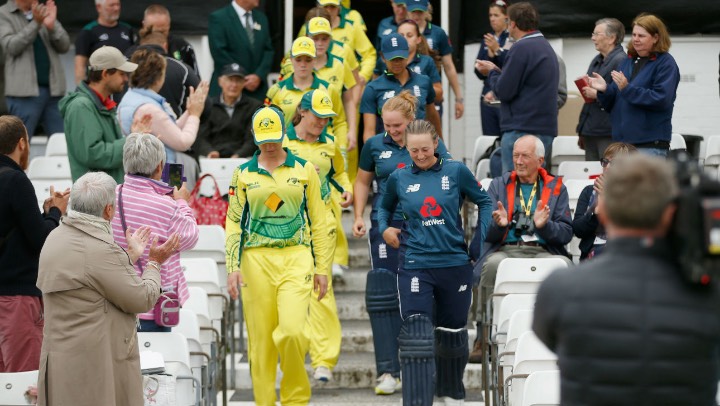 In reply, The Aboriginal XI were soon in trouble as three wickets fell with the score on 20.

First Sara Darney (11) was caught behind by Eleanor Threlkeld off Lauren Bell before Linsey Smith trapped Hannah Darlington (8) lbw and had Roxsanne Van Veen (0) caught at backward point by Sarah Glenn in the same over.

Skipper Gardner was dropped on 19 at deep cover off leg-spinner Glenn, but from the very next ball Christina Coulson (7) chipped to Alice Davidson-Richards running in from cover.

Gardner took advantage of her life to hit some lusty blows to help her side reach 67-4 at the halfway point, only to depart for 33 (seven fours) soon after as she was held by Georgie Boyce at deep cover off Glenn, who then bowled Sally Moylan for 4.

Emma Lamb had Jemma Astley (1) stumped by Threlkeld while Emma Manix-Geeves was run out after a smart piece of fielding by Glenn, leaving the tourists on 68-8.

Some late order hitting from Dharmini Cauhan (14) and Natalie Plane (16 not out) ensured the Aboriginal XI made it past three figures, the former eventually giving a catch held at mid-off by Bell to give Charlotte Dean a wicket.

But the Academy side could be well pleased an accomplished performance as the tourists closed on 112-9.