Notts’ Alex Hales powered a brilliant 147 off 92 balls as a captivated Trent Bridge crowd witnessed a world record One-Day International score in an emphatic, series-clinching victory for England over Australia by their largest ever margin in 50 over cricket, of 242 runs.

The right-hander, batting at number three, smashed 16 boundaries and five maximums as the hosts, put in to bat, racked up a colossal 481-6 from their 50 overs.

Hales was superbly supported by Jonny Bairstow, who thumped 139 off 92 balls, Jason Roy, who added 82 from 61, and captain Eoin Morgan, who made 67 off 30 balls, against a shellshocked Australia attack who used eight bowlers in a bid to halt the onslaught.

The total beat the previous global record score of 444-3 that was also registered by England at Trent Bridge, against Pakistan in 2016, when Hales got 171 of them.

And again the Outlaw was in prime form to boost his hopes of remaining in the first choice one-day side once the injured Ben Stokes comes back into contention by boosting his average in ODIs on his home ground to 88.20. 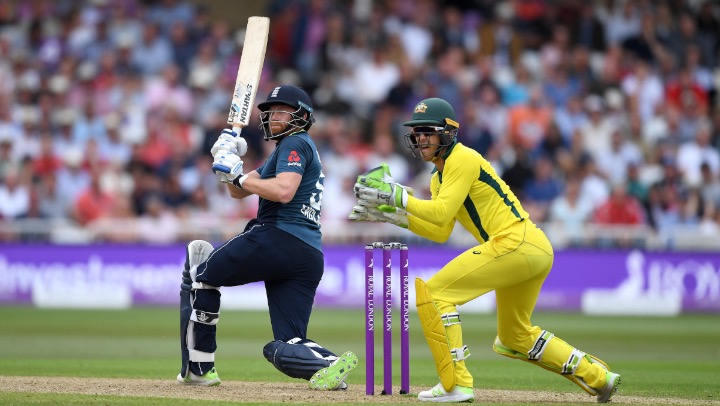 When Hales strode to the wicket, an impressive platform had already been set by Bairstow and Roy, who continued their excellent recent form to put on 159 for the opening wicket, with the stand only broken when the latter was run out by D’Arcy Short attempting an ill-advised two.

Bairstow survived an upheld lbw shout from Ashton Agar that was reversed on review and was dropped by Marcus Stoinis off Andrew Tye on 30 before whistling along to three figures, completing the job with a six over the legside off Short.

He eventually succumbed when pulling Agar straight to Jhye Richardson on the deep mid-wicket boundary, but not before hitting 15 fours and five sixes.

The Yorkshireman put on 151 in 15.2 overs with Hales, but there was no let-up for the tourists as, after a brief cameo from Jos Buttler (11), who skied Richardson to Aaron Finch at deep long on, Morgan carried on England’s relentless quest for runs.

The skipper punched three fours and six sixes before he and Hales went to consecutive Richardson balls in the closing stages, giving the bowler final figures of 3-92.

Moeen Ali (11) was run out by keeper Tim Paine before Joe Root (4 not out) and David Willey (1 not out) saw England through to the close of their innings. 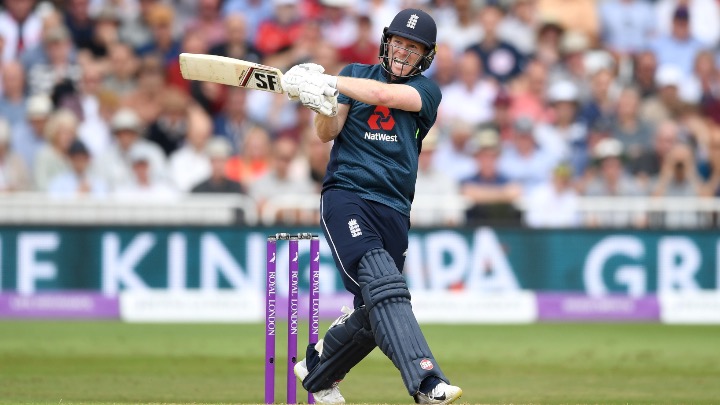 In all, England cleared the rope on 21 occasions and found the boundary rope 41 times to leave a capacity 17,007 crowd enthralled.

Australia did their best to keep up with the run rate of almost 10 per over, and did so in the early stages, despite the loss of Short, pouched by Ali off the bowling of Willey for 15.

But then, in quick succession, Ali caught and bowled Travis Head (51) and had Shaun Marsh (24) caught at long on by Liam Plunkett to halt the visitors’ charge.

It was 152-4 when Aaron Finch (20) was next to go as he tried to heave leg-spinner Adil Rashid into the Radcliffe Road Stand but was bowled.

Stoinis followed for 44 as he was run out thanks to a pinpoint throw from Bairstow and a smart piece of work by Buttler, while Paine (5) holed out on the square leg boundary off Rashid, as he was taken on the run by Hales.

Another good catch saw the back of Glenn Maxwell (19) as he was held in the deep by Plunkett to give Willey a second wicket.

More fantastic fielding saw Rashid take a diving caught and bowled effort to remove Agar (25) after the left-hander had battled hard and the Australians were put out of their misery as Richardson was stumped advancing down the track from Ali's bowling and Billy Stanlake (1) suffered the same fate trying to hit Rashid.

Ali finished with 3-28 off five overs, while Rashid took claimed 4-47 as the tourists were all out for 239.

The victory margin of 242 runs was a record for England in One-Day Internationals and their triumph gives them an unassailable 3-0 lead in the five-match Royal London One-Day series with matches at Chester-le-Street (Thursday) and Manchester (Sunday) to come.