After day two had been completely washed out, during which time the visitors declared on 266-9, the students finally got their chance to have a bat as day three started on time.

Sam Evans and Hassan Azad opened up for Loughborough, but, after 12 overs, play was halted by a heavy rain shower. After a delay of almost 50 minutes, the pair then moved the total to 63-0 at lunch.

Evans (39) and Hassan Azad (47) both retired out three short of the century partnership with 26 overs gone, and it was only then that the Notts attack began to encounter some success.

Blatherwick who claimed 2-56, had Oliver Soames (15) caught at mid-on by Chris Gibson before Matt Carter bowled James Bracey for 30 to make it 147-4. 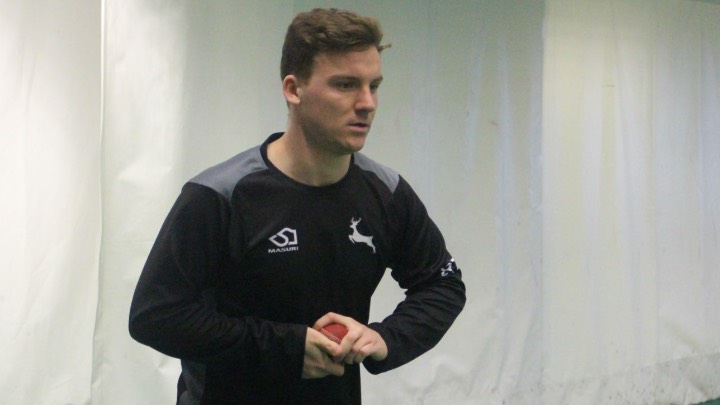 MCCU captain Adam Tillcock (1) was trapped lbw by Blatherwick, while Charlie Thurston weighed in with 40 until leg-spinner Connor Marshall got him to edge a catch to keeper Tom Keast. With the score on 185-6, tea was taken immediately.

Left-arm spinner Patterson-White (pictured above), who claimed 2-14, then took centre stage for the match’s closing stages, first having Joe Kendall caught for 27 at square leg by Connor Marshall and then ousting Louis Kimber, caught behind by Keast, without the batsman scoring.

Last man Andrew Rishton, who made 4 not out, and Nick Hammond, who struck 42 not out, saw Loughborough through to the close on 257-9.