The North side captained by Nottinghamshire’s Steven Mullaney finally claimed their first victory in the North-South Series at the fifth attempt to take this year’s series into a decider on Friday.

They held their nerve in the field at the Kensington Oval to win by 46 runs despite a second consecutive century from South opener Nick Gubbins, with Lancashire leg-spinner Matt Parkinson claiming three important wickets.

Earlier the Worcestershire pair of Joe Clarke (71) and Brett D’Oliveira (79) had laid the foundations for a strong North total, along with another fine cameo from all-rounder Mullaney, who made 42.

But they were in danger of losing their way until a swashbuckling 64 from Derbyshire all-rounder Matt Critchley on his North debut ensured the South had too much to chase.

Even then there were times in the South reply when the North seemed to be staring at a fifth consecutive defeat, as Gubbins again played beautifully, and Laurie Evans hit 64 from 67 balls.

But Richard Gleeson yorked Gubbins for 109 and then dismissed Delray Rawlins two balls later to change the momentum, and Parkinson then showed his skill to keep up the pressure.

Both teams made two changes to ensure that all 13 of their squads had been involved in the series, with Ollie Pope and Jamie Porter replacing John Simpson and Tom Barber for the South, and Critchley and Matt Fisher replacing Keaton Jennings and Zak Chappell for the North. 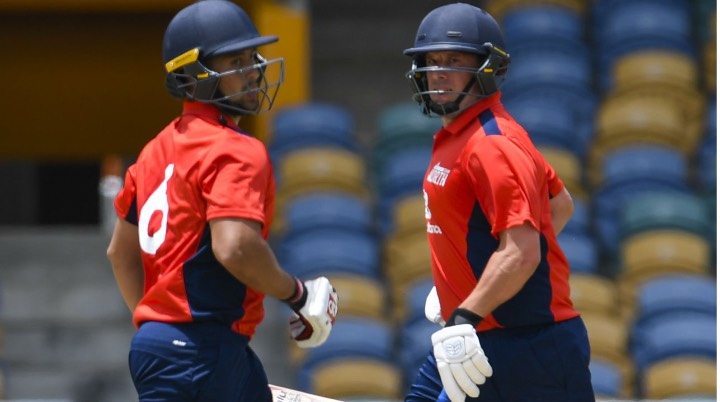 Sam Northeast chose to bowl after ending a run of four consecutive toss defeats for the South, but the North got off to a flier with an opening stand of 95 inside 11 overs between Clarke and Alex Davies.

Paul Walter broke the stand by bowling Davies for 42 with a slower ball, then had Sam Hain snapped up by Rawlins at mid-wicket.

Clarke powered on, hitting two sixes and nine fours, but his dismissal, pulling Dom Bess to mid-wicket where Sam Curran took a sharp catch, followed the loss of Adam Hose in the previous over, and meant that at 132-4 the North had lost 4-37.

As in the first game, D’Oliveira joined Mullaney to steady the ship in an intelligent fifth-wicket stand.

This time they put on 108 in 18 overs before Mullaney drove Bess to cover, deserved reward for the Somerset spinner who earned figures of 2-47 from his 10 overs.

But D’Oliveira, who had reached his 50 with a straight six off Ravi Patel, ploughed on before he drove Curran to long on.

And Critchley provided the North with perfect late-order impetus as he swung four sixes in his 37-ball innings, one of them bouncing off the roof of the Greenidge & Haynes Stand and going out of the ground, pushing his side towards a total which proved too large to chase.