It’s now exactly a year to go until the first ICC Cricket World Cup 2019 match comes to Trent Bridge – so don’t miss out on your opportunity to join us.

Five matches will be played at our iconic venue, starting with the West Indies versus Pakistan on Friday 31 May 2019.

England versus Pakistan comes next on Monday 3 June, followed by Australia v West Indies on Thursday 6 June, India versus New Zealand on Thursday 13 June and, finally, Australia versus Bangladesh on Thursday 20 June.

Now is your last chance to secure priority access for seats in public areas in the Cricket Family Ballot by becoming a Nottinghamshire Member. Click here to join our family before midnight tonight in order to receive your exclusive link.

Please note that tickets for Members’ areas will not be available in the Cricket Family Ballot and the Members’ area sale is worth waiting for if you wish to secure seats in The Pavilion or the Larwood & Voce Stand.

“We’re going to make this event a great celebration of cricket and the cultural diversity of our sport.” ICC Chief Executive, David Richardson

The last time Trent Bridge hosted a global competition, as pictured below with England's Graham Thorpe in action, was the ICC World Twenty20 in 2009.

The first match of next summer's tournament takes place a day before the first Trent Bridge game, when England take on South Africa at The Oval, London.

The format for the 2019 edition, the same used in Australia and New Zealand in 1992, sees the 10 best teams in the world go head to head in a round robin format.

Building on the success of the ICC Champions Trophy in 2013 and 2017 - as well as last year’s ICC Women’s World Cup - it is anticipated that every one of the 48 matches will attract diverse crowds creating a unique atmosphere where every team has home support.

To celebrate the year-to-go milestone and start the countdown, London based artist Caleb Femi has written a Cricket World Cup declaration setting out the promise of the event to fans around the world, and what it means to cricket fans in England and Wales. 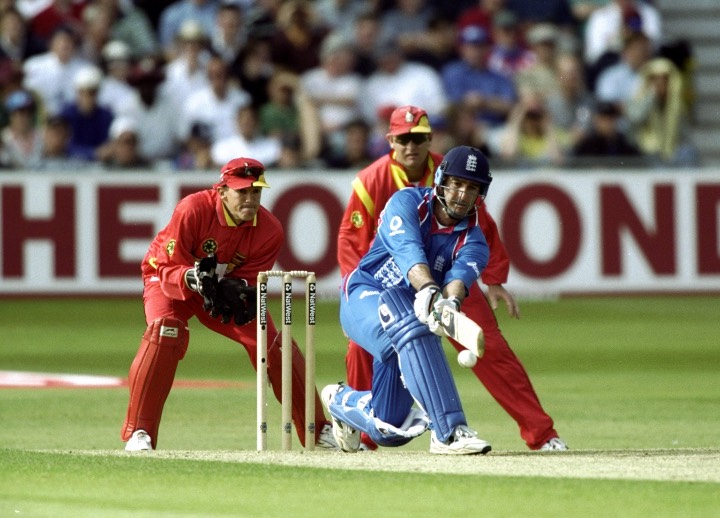 “That, combined with the best teams in the world going head to head in outstanding venues, is a fantastic combination for cricket fans globally.

“We’re going to make this event a great celebration of cricket and the cultural diversity of our sport, bringing people and communities together from Manchester to Mumbai and Southampton to Sydney.”

Interest in tickets in the Cricket Family Ballot has been high and Steve Elworthy, the CWC Managing Director, said: “England and Wales have a rich history of staging great cricket and global events with phenomenal public support. We know the ICC Cricket World Cup will be no different and fans will turn out in record numbers to support the event.

‘‘With the Cricket Family Ballot about to close, we thank all those from around the world who support this great game on a regular basis, and it is fitting they had priority access to tickets.

“But everyone will get a chance as the Public Ballot will open on 1 August 2018 and then in September the remaining tickets will go on open sale. Our initial campaign has been an enormous success and we can be proud of the progress so far.”

Secretary of State for Digital, Culture, Media and Sport, Matt Hancock said: "Cricket is a common language that unites nations across the world and it is fantastic that the ICC Cricket World Cup is returning to England and Wales next year.

“We have a brilliant track record in the UK for hosting major sports events, which help inspire future generations to take part. I’m extremely proud that we will host the biggest tournament in cricket and look forward to welcoming the world in the summer of 2019.