PORTRAIT IN CHRIS READ'S HONOUR TO BE UNVEILED

Former Nottinghamshire Captain and wicketkeeper Chris Read will return to Trent Bridge this Sunday (13 May) when a portrait commissioned in his honour is unveiled.

The popular, long-serving player retired at the end of last season having dedicated 20 years of his career – 10 of them as skipper, to the Club.

In his final game, he scored a century to help Notts get the draw they needed at Sussex to earn promotion back to Division One of the Specsavers County Championship.

“It will be great to recognise Chris in this way and I’m sure the Members will value the opportunity to express their thanks.” Director of Cricket Mick Newell.

He had already helped the Club to win the Royal London One-Day Cup final at Lord’s, scoring a vital 58 as Alex Hales hit 187 not out to help the Outlaws secure a four-wicket victory over Surrey.

During his Notts stint at Trent Bridge, Read claimed a Club-record 983 first-class dismissals and scored 15,103 runs, including 57 dismissals and 661 runs in 2017.

The portrait has been painted by former England wicket-keeper Jack Russell (pictured below), with whom the Devonian was on the Gloucestershire staff early in his career. 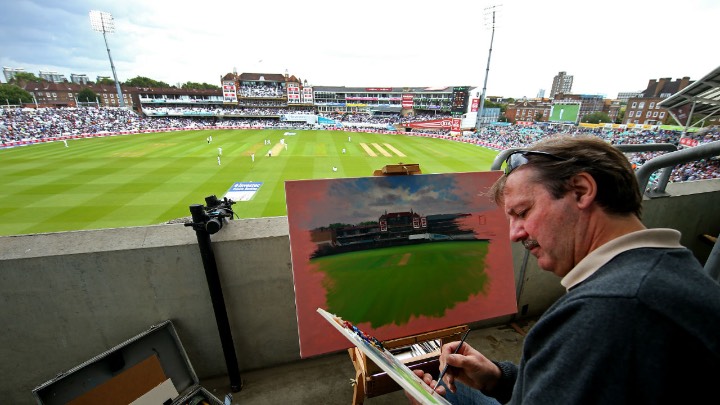 The unveiling will be made in the Long Room of the Member’s Pavilion at 1.15pm – during the lunch interval of the third day of the current match between Notts and Lancashire.

Director of Cricket Mick Newell said: “We really wanted to have some kind or permanent reminder of Chris because he has given so much to the Club down the years – and will, of course, be back to coach later in the summer.

“It will be great to recognise him in this way and I’m sure the Members will value the opportunity to express their thanks for his superb contribution down the years, as well as get their pictures with Chris and the portrait.”

The painting is to be hung in the Long Room following the conclusion of the Notts and Lancashire game.