REACTION: MOORES CALLS FOR IMPROVEMENT AHEAD OF RAPIDS CLASH

Peter Moores says Notts Outlaws will have to perform more consistently during matches if they are to qualify for the knock-out stages of the Royal London One-Day Cup, where the team are defending their title.

It leaves the Outlaws with a record of having won two and lost two, with one weather abandonment, going into Friday’s match with the Worcestershire Rapids.

“This Warwickshire match was a big game,” said Head Coach Moores. “We knew that if we won, we had one foot in the quarter-finals, but if we lost then we’d have to play really well in other games.

“There’s things that we can do better. I still think we can bowl better and I think the seamers will be a little bit disappointed with how they bowled up front and obviously we need to bat better than today.

“Probably, apart from Chris Nash, most of the players would have been disappointed with the way he got out.”

“It’s about putting a complete team performance together. We still have two games left here at Trent Bridge, but we know we have to play good cricket and we have to be ready to go on Friday.”

Moores felt the lack of partnerships was the most damaging aspect of Notts' failure to get home, with a steady fall of wickets breaking up any momentum.

He said: “No-one went on and got a really significant score, although Ross Taylor played well for his 50 and was disappointed to get out.

“Probably, apart from Chris Nash, most of the players would have been disappointed with the way they got out.

“When you’ve got the top seven batters that we have going in there, you think you are going to get a partnership. 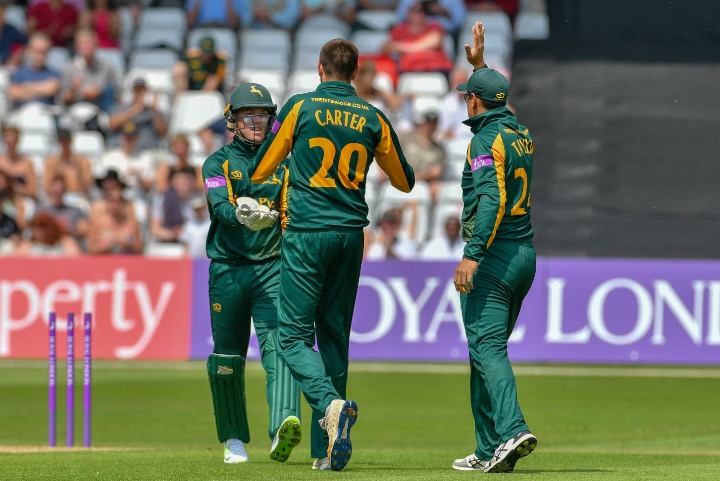 “If you get two people on our ground, where the ball run across the surface so quickly, you can score well, so although we lost a couple of people quickly up front we felt we were still in with a decent position.

“I think 290-odd was light, it was a 300-plus pitch, but no complaints because they bowled well and we were disappointed with the way we batted.”

Moores, however, was delighted by Matt Carter’s contribution on his List A debut, with the spinner taking 4-40 from 10 overs.

He was also pleased to see Jack Blatherwick make his first-team debut, even if the seamer bowled just two overs.

“It was a great day for Matt,” said Moores. “He changed his pace very well and bowled in different situations – early in the powerplay and then later on. It wasn’t that he just got the nice overs.

“It was a really top-class piece of bowling and he will take a lot from that. He took his debut in his stride.

“It was a really top-class piece of bowling from Matt Carter and he will take a lot from that. He took his debut in his stride.”

“Jack only got a couple of overs because we didn’t really need to use him because taking the pace off the ball worked better for us.

“But it was nice to get him out there and get the chance to experience what it was like to play in front of an unbelievably good crowd and a great day for the Club.”

The two debutants were brought in for Will Fraine and Harry Gurney, the latter who missed out with a calf strain.

Moores said: “Harry’s is not a major one – it’s a little tweak. How bad that is we will see over the next two or three days and if he will be available on Friday yet, we’re not quite sure yet.”