Ross Taylor is looking forward to making his home debut for Nottinghamshire in Friday’s Specsavers County Championship match against Hampshire at Trent Bridge.

With the overseas signing's new side having been on the road for their first three encounters, Taylor has had ample opportunity to get to know his new team-mates.

And the New Zealander, 34, has liked what he’s seen – with two wins, in Manchester and Worcester, firing the Division One newcomers to the top of the early-season table.

“They’ve been fantastic,” said. “They’re a great bunch of lads and a great coaching staff, so it’s pretty much everything I expected when joining up.”

“There’s still a long way to go in this campaign but the bowlers have been absolutely outstanding. They’ve figured out the lengths on these wickets and asked the opposition batsmen questions – and I hope they can continue to do that for a bit longer.”

“There’s still a long way to go in this campaign but the bowlers have been absolutely outstanding.”

As a member of the slip catching cordon, Taylor admitted that no-one can afford to rest up, as every ball has looked like taking a wicket.

The man who has had previous county engagements with both Durham and Sussex said: “It’s been a bit demanding and even more so as it has been so cold, so many thanks to the people that make the handwarmers because they are making our jobs a bit easier!”

Whilst Notts have enjoyed success on the road, Taylor understands that his team-mates are ready to return home.

“It’s been a great start and I’m sure we’d have taken 45 points from our first three matches but now we’ve got a tough game coming up against Hampshire at home,” he said.

“It has probably been nice to be away for these three games, but I’m sure it’s nice for the guys to be sleeping in their own beds and playing at home.”

After bowling first in every fixture, Taylor anticipates what may happen when Hampshire are the visitors this week – giving their captain James Vince the right to bowl first without a toss. 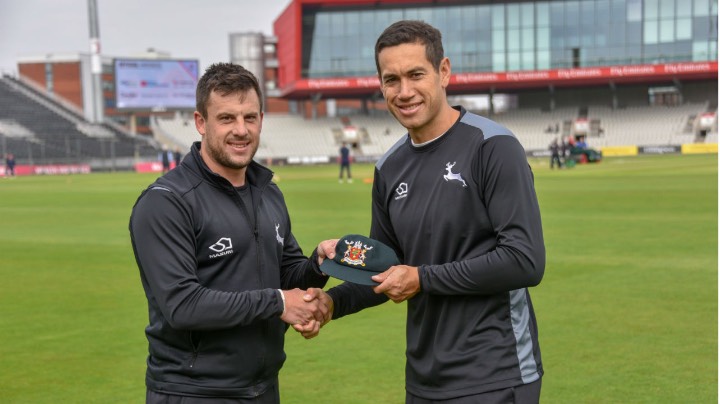 He said: “It’ll be interesting with this toss rule whether we need to put the pads on straightaway on Friday.

“I’ve heard a lot about Nottingham, but haven’t really had the chance to check it out. It will be nice to spend a bit of time at home. Samit (Patel) was supposed to take me into town, but he didn’t come and pick me up!”

Taylor’s previous experiences of playing at Trent Bridge are minimal, his one Test appearance on the ground came a decade ago.

“I try and forget about the Test,” he said. “I don’t think I scored many runs but in the one-dayers I’ve had a few fifties on the ground and I’m just looking forward to calling it home.

“I’ve got my spot in the changing room, so I’m ready and just looking forward to spending as much time out in the middle as I can.”

“I’ve got my spot in the changing room, so I’m ready and just looking forward to spending as much time out in the middle as I can.”

Half centuries in the matches at Emerald Headingley and Blackfinch New Road have already whetted the appetite as to what Taylor might produce for the Nottinghamshire cause, with the batsman eager to praise his new Head Coach.

THe right-hander added: “I felt rusty and tired in that first match against Lancashire but I’ve worked hard on my game in the nets before the last two games and picked the brains of Mooresy (Peter Moores) and the other batsmen.

“It’s been nice to get two fifties but I hope there’s more to come in the games that are ahead, but we all know it’s a leveller playing at this time of year.”

Hampshire are third in the table, 10 points behind Notts having followed an opening win against Worcestershire with a defeat against Surrey at the Kia Oval and then a rain-ruined draw at home to Essex .

Their batting line-up has been strengthened by the signing of Hashim Amla, the South African who had a stint at Trent Bridge in 2010.

You can watch every ball of Notts’ scheduled home matches in 2018 - starting with Friday's Specsavers County Championship game against Hampshire - by joining our family as a Member. Adult prices start from £38 and you can become a Member by clicking here.