Notts Outlaws moved a step closer to qualifying for the knock-out stages of the Royal London One-Day Cup with a brutal batting display against Leicestershire Foxes at Trent Bridge.

For the sixth time in three years Notts went past 400 in one-day cricket, before closing on 433 for seven.

Ben Duckett and Steven Mullaney led the assault upon the Foxes attack but the four other member of the Outlaws top order also hit punishing half-centuries.

Duckett scored 86 from only 61 balls and Mullaney went even faster, bludgeoning 81 from 41 balls.

Gavin Griffifths, with three for 92, was the most successful Leicestershire bowler.

The run chase was interrupted by rain, resulting in a revised target of 347 from 37 overs but the soaring run rate counted against the visitors, as wickets began to tumble at regular intervals.

Luke Fletcher claimed figures of three for 53 as the Foxes were bowled out for 259 in 33.2 overs, leaving the home side as victors by 87 runs under the Duckworth-Lewis-Stern Method. 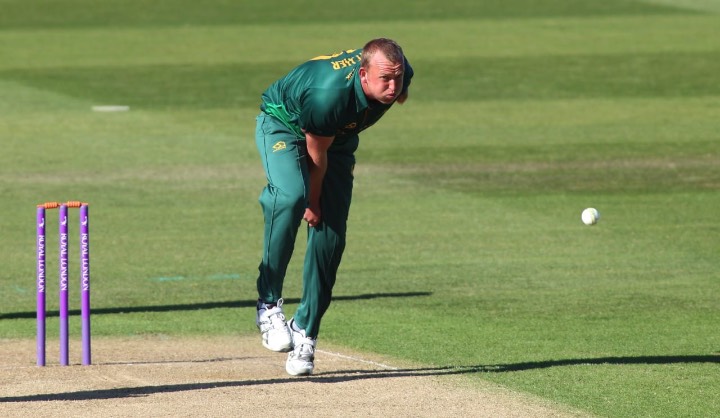 Earlier, Notts’ initial plans were thrown into disarray just before the toss when the in-form Ben Slater was withdrawn after picking up a slight niggle in the warm-up.

His deputy at the top of the order, Chris Nash, proved to be an able replacement and an ideal foil for Joe Clarke as the hosts added 82 in the opening 10-over powerplay.

Clarke had been spilled on 26, driving Chris Wright to the finger-tips of Paul Horton at cover but he offered very little else to the fielding side until clipping to short fine leg for 55.

Nash, who had helped add 108 for the first wicket, then fell to the spin of Colin Ackermann for 56.

Duckett went through his full repertoire of shots, hitting boundaries all around the wicket as he reached his 50 from 41 balls. The left-hander dominated a third-wicket partnership of 106 with Jake Libby, before tamely ramping the ball straight into the hands of wicketkeeper Lewis Hill.

Libby had reached his first one-day 50 from 45 balls and advanced his score to 66 before holing out.

The impetus was maintained with a thrilling partnership of 91 in only 7.3 overs between Mullaney and Tom Moores.

Both eventually lost their wickets to Griffiths, who also had Luke Fletcher caught before, leaving James Pattinson to club the 14th and final six of the innings.

The Outlaws total was their second highest in history, falling just short of the 445 for eight that they made against Northants in 2016.

Mark Cosgrove and Harry Dearden put on 106 for the first wicket in only 13.2 overs as the Foxes tried to lay the foundations for an unlikely victory chase.

At 152 for two, from 21.5 overs, a shower of rain forced the players from the field and left a revised target of almost 13 runs per over.

Dearden, who had become the eighth player in the match to pass 50 fell in the quest for quick runs and was immediately followed back to the pavilion by two teammates.

Sharp work by Pattinson ran out Paul Horton for 36 and Arron Lilley was bowled first ball by Patel.

Hill scored a defiant 21 from only 10 balls but was one of three wickets to fall in the same Fletcher over.

The outcome means that Notts have taken maximum points from their first four matches for the first time since 2013. Leicestershire’s defeat leaves them on two points from five matches and unable to qualify from the group.

Join us as a Member for access to every home Royal London One Day Cup group game, every County Championship fixture and seven home T20 Vitality Blast matches from £29 by clicking here.

Rain Sees Seconds Clash with Yorkshire End in a Draw