The Men in Green were humbled on this ground just three days ago after being skittled for just 105, but comfortably had the better of the tournament favourites.

Only centuries from Jos Buttler and Joe Root threatened to take England to within touching distance of their victory target.

In his pre-match press conference, England captain Eoin Morgan claimed his side were more comfortable batting second, but he must have wished that his bowlers had been able to restrict Pakistan to a more routine target.

Chris Woakes opened the bowling for England, running in with renewed potency and regularly topping 89mph, but he also proved the most expensive of the home side’s seamers.

The Pakistan openers made light work of Woakes and Jofra Archer, racing to 69/0 from their opening ten overs. 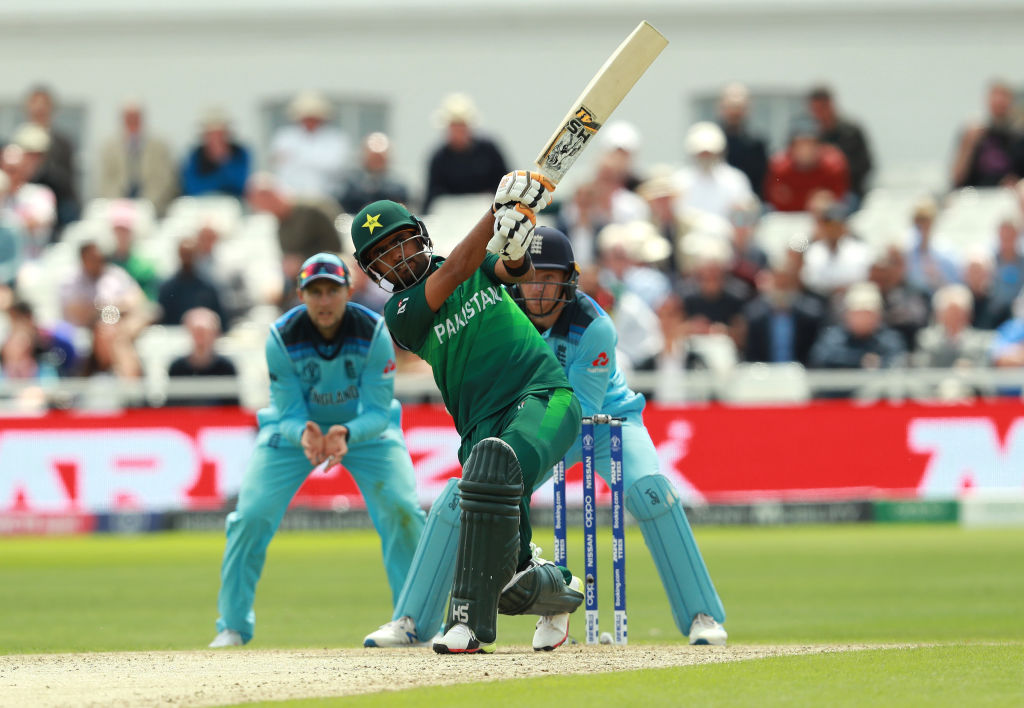 Moeen Ali and Mark Wood were then able to bring a modicum of control back to proceedings, Ali removing Fakhar Zaman for 36 following quick work from Buttler behind the stumps.

Ali would also remove Imam ul-Haq (44) and Babar Azam (63), but by this point Pakistan were nearing 200 with twenty overs still to go and plenty of wickets in hand.

This provided the license for Mohammad Hafeez and Sarfaraz Ahmed to accelerate, scoring 80 runs in an unbroken ten-over stand before Hafeez was brilliantly caught by Woakes off Mark Wood.

Woakes and Wood would share the final four wickets to fall, but Pakistan continued to pepper the fence, and would have been satisfied with posting 348/8 from their fifty overs.

Scoring above 350 has become almost routine for England in recent years, but were they to overhaul this total today, it would have been their fourth-highest ODI chase – and the highest ever by any team in a World Cup.

And the tournament pressure appeared to be telling as Jason Roy departed, opting to sweep Shadab Khan and being trapped lbw for 8.

Jonny Bairstow and Joe Root began to mount a recovery, with Bairstow looking dangerous before he was caught in two minds by a good Wahab Riaz delivery. 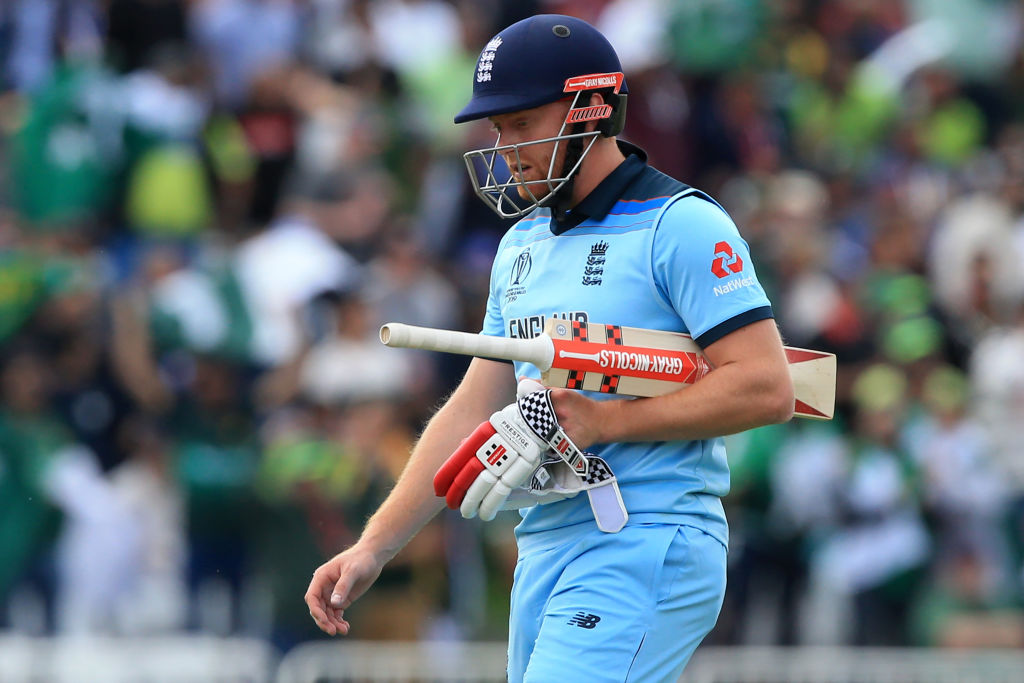 Bairstow, frustrated, had to depart after he feathered behind for 32, and when Morgan and Ben Stokes both came and went cheaply, England were suddenly staring down the barrel.

From 118-4, however, Root and Buttler were able to mount a thrilling counter-attack.

England’s batsmen had been unable to pick the Pakistan spinners throughout the afternoon, but Root and Buttler took a more proactive route.

Buttler was particularly effective, frequently moving out of his crease to nullify the spin, and putting on a century stand with the England Test captain.

Root was first to move to three figures, but the England chase always felt as if it was being conducted on a tightrope, and his departure for 107 was a severe wobble.

The Yorkshireman was disgusted with himself as he offered a simple catch to Hafeez in the gully, leaving Buttler in the company of the out-of-form Moeen Ali. 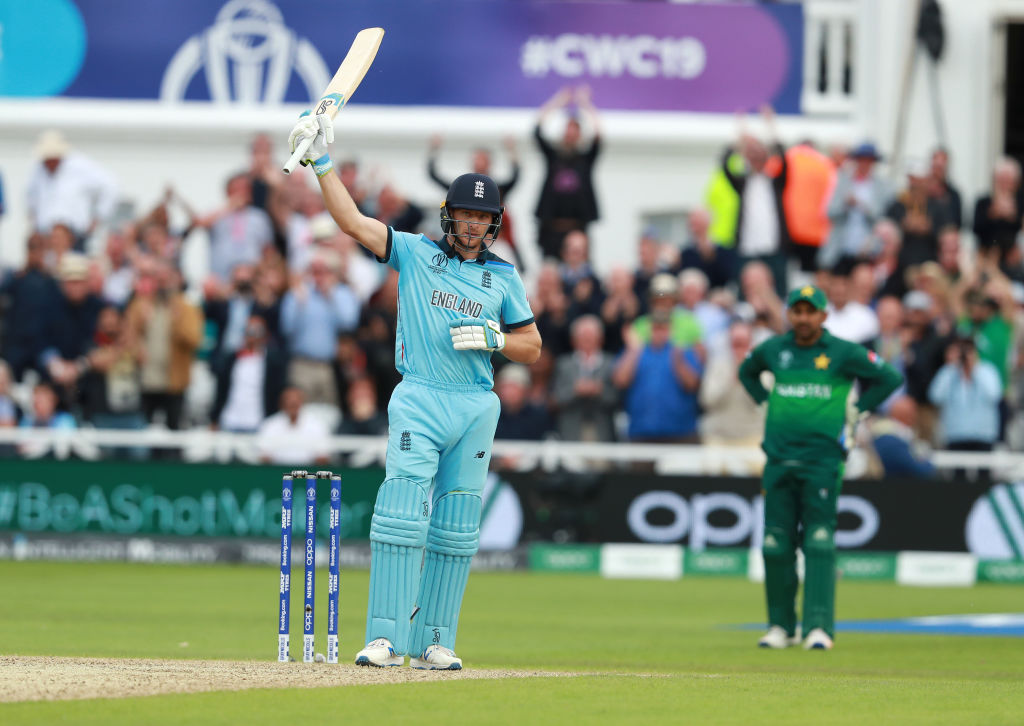 Buttler too would reach his century and hole out, Mohammad Amir inducing a loose shot with the wicketkeeper on 103.

Ali and Woakes kept a semblance of hope alive for the hosts as the run rate began to climb, but both were removed in successive deliveries by Wahab Riaz.

The Trent Bridge PA system began to play ‘Under Pressure’ as Woakes walked off, but Archer and Rashid’s task was already looking nigh-on impossible.

And when Archer skied a slower ball to Wahab Riaz, the death knell was all but sounded.

England would close on 334-9, as Trent Bridge became a sea of green and white and the hordes of Pakistan fans rushed to celebrate their heroes.

Bowling coach Azhar Mahmood may have claimed before the game that beating England would not be a surprise result, but his side came into the game on an eleven-game losing run.

To end this run by humbling the tournament favourites will certainly have sent shockwaves through the rest of the competition.

England have ample time to bounce back, and may even be a better side for having had their progress checked early on in the competition, but Morgan and Trevor Bayliss are left contemplating a top order which failed to fire, and a pace attack which didn’t live up to its billing, before they face Bangladesh on Saturday.