Cricket in April at Trent Bridge. Following the truncated proceedings of 2020, having our summertime sport back on the hallowed turf at the earliest opportunity was a sight to behold. All that was missing were the members and supporters.

Following a pre-season in which an Academy graduate had stolen a march on his batting competition and a future Outlaw was unearthed, Durham acted as the opening opponents of the summer.

Step forward Lyndon James. The Worksop-born all-rounder had made his First-Class debut at the back end of the 2018 season, removing Murali Vijay, Dan Lawrence and Tom Westley, but had found red-ball opportunities hard to come by in the following years. 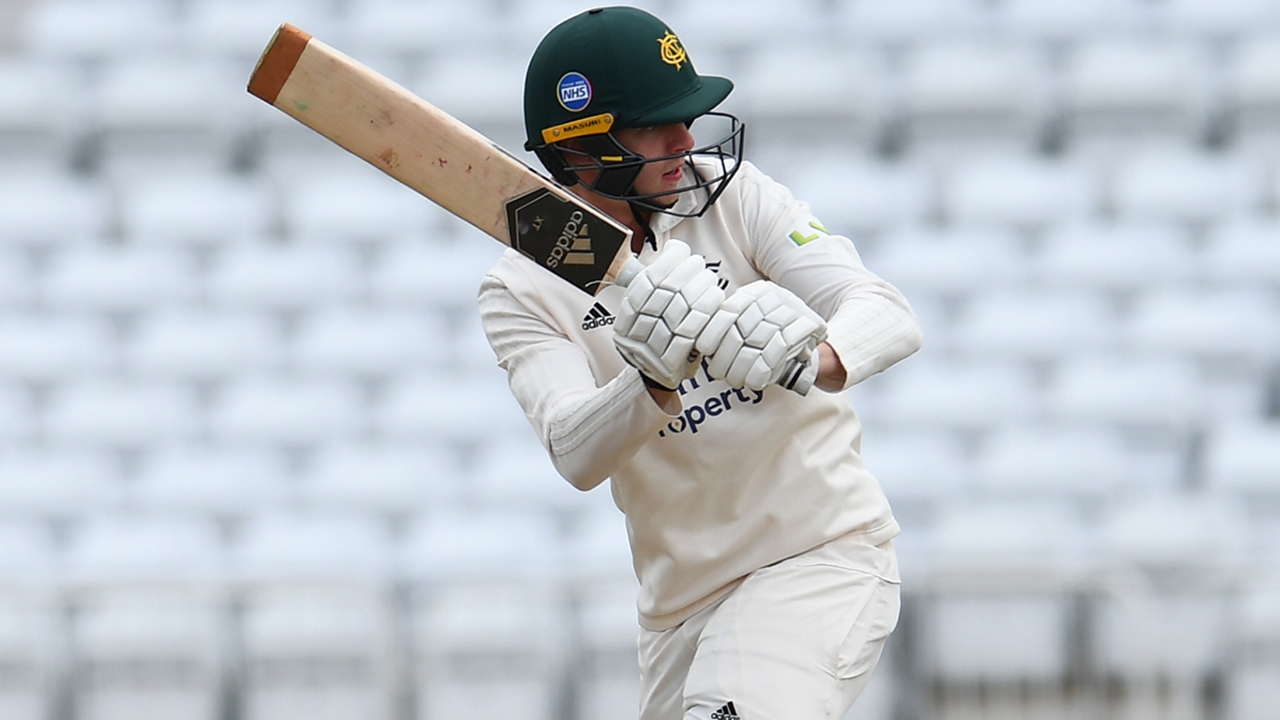 However, an impressive run in the pre-season programme ensured the erstwhile Second XI captain slotted in at number five in the order for the curtain-raiser, whilst also providing a further bowling option for skipper Steven Mullaney.

His first innings exploits were relatively quiet, taking the wicket of Stuart Poynter and contributing 28 with the bat as Durham edged proceedings at the halfway stage, despite Tom Moores’ fluent 96*.

However, when the chips were down in the second innings, James showed his maturity and temperament, skills that were on show on more than one occasion throughout 2021.

The 22-year-old came to the crease with the score on 88-3 early on the final day before proceeding to ensure he was one of the not out batsmen as the two captains shook hands – metaphorically, in these Covid-affected times.

Next to visit Trent Bridge were Warwickshire, a foe that the Green and Golds would become well accustomed to battling with in 2021.

A first innings 73* from the flashing blade of Liam Patterson-White – another sign of things to come down the line – and a bowling onslaught led by Stuart Broad (3-50) ensured Nottinghamshire an early advantage.

The Bears were bundled out for 201 during an innings in which Dane Paterson began to show glimpses of his wicket-taking prowess with his first scalps for his new club. 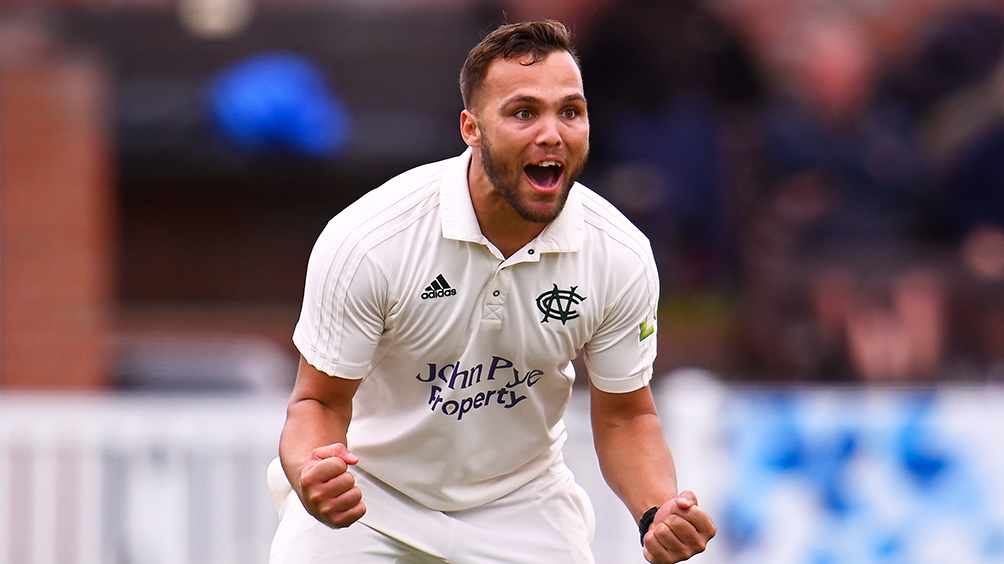 However, the visitors fought back, dismissing Notts for 260 at the second time of asking, leaving a 300-plus target to chase in the fourth innings.

Broad and Paterson gave it their all, with the former bowling 30 overs of sheer heart and hostility. But on a pitch that was getting better to bat on as the game progressed, the Bears triumphed.

It was the archetypal 'good advert for First-Class cricket'; not that the pain in the home dressing room was in any way diminished by having played their part in a thriller.

Dusting themselves off, a first away outing of the summer quickly followed, to the picturesque outpost of New Road.

A pitch that would have looked more at home at the height of summer greeted the visitors on their arrival.

Jake Libby (117) and the Worcestershire lower order tucked in across a near two-day batting effort, posting 436 in their first dig.

What followed over the final two days of the fixture would enter the history books.

Haseeb Hameed, not content with scoring his first century in Notts colours on day three, returned on day four to repeat the feat, becoming only the 20th man for the club to achieve twin tons in a First-Class fixture.

The 24-year-old faced 635 deliveries in total, the most since County Championship records began, whilst the 236-run unbeaten opening stand with Ben Slater (114*) became Notts' best versus the Pears. 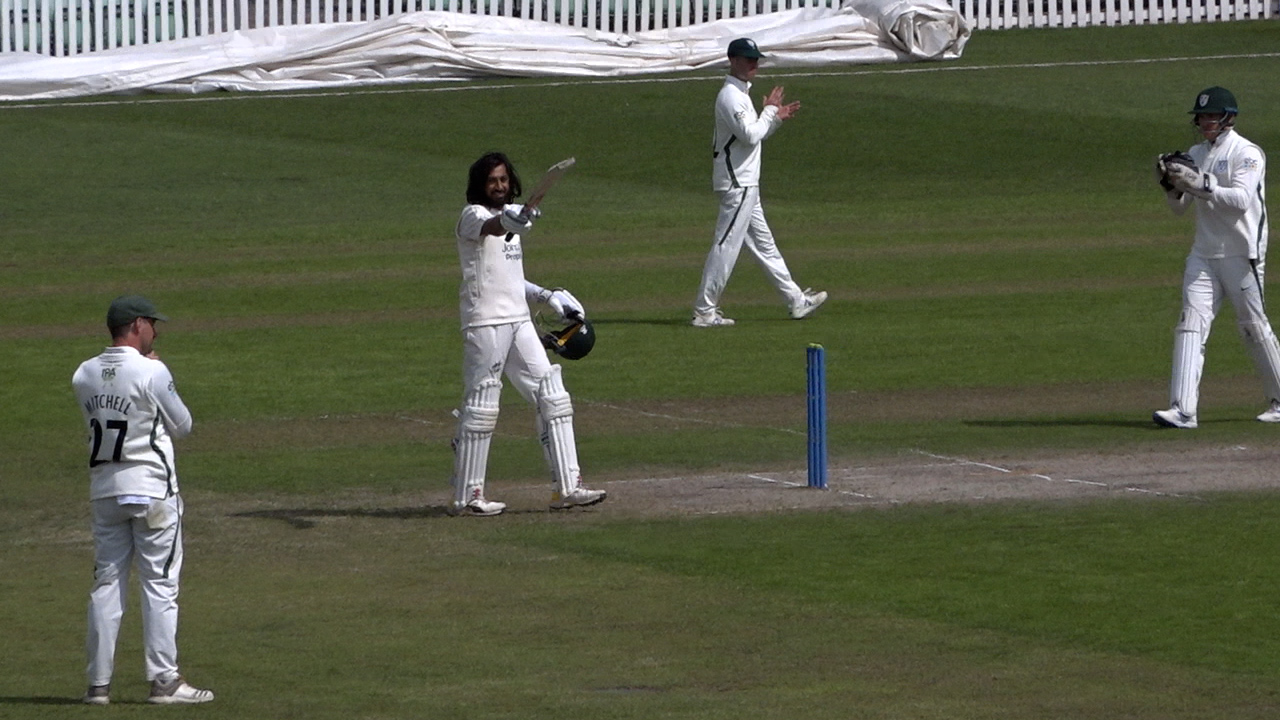 Buoyed by the batting efforts at New Road, Nottinghamshire's next stop was the Incora County Ground for a first local derby of the summer.

Unbeaten on 114 leaving Worcestershire, Slater picked up where he left off with a first-innings 107 against his former club, Nottinghamshire posting 256 having been put into bat.

In a sight that would send a shudder to all future opponents in 2021, Luke Fletcher then swiftly dispatched the Derbyshire middle and lower order on his way to figures of 5-28 – with the hosts eight down at stumps on the first day for just 86 runs.

Hameed (94), Ben Duckett (87) and Joe Clarke (53) hammered home the Green and Golds’ advantage before handing back over to the revered pace attack of Fletcher, Broad and Paterson. 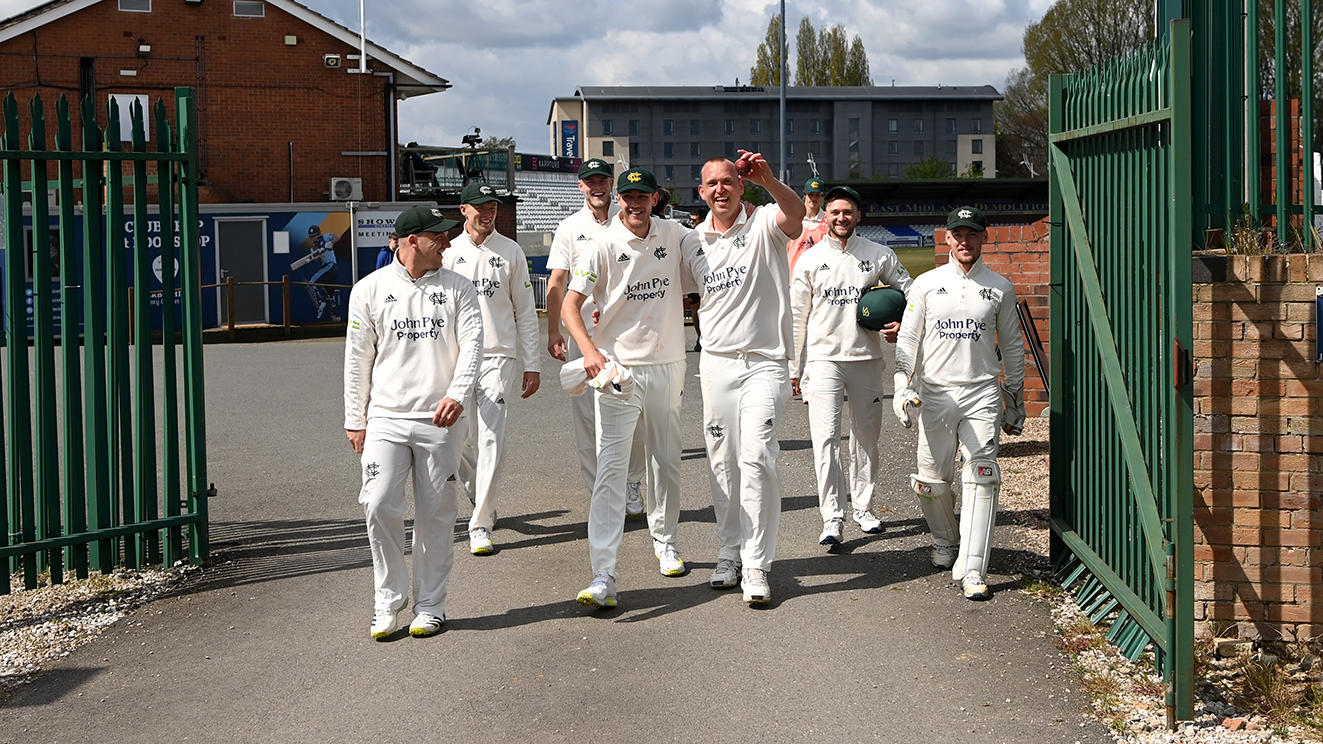 As the match slipped over from April to May, the trio combined to take nine wickets in Derbyshire’s second effort, in which they mustered just 49 more than their first.

Paterson's most memorable contribution, however, was on the bounday's edge, scurrying from long-on to pluck a ball destined for the empty stands out of thin air.

The catch, and the exuberant celebration, will live long in the memory.

Ultimately, it was left to the left-arm spin of Patterson-White to put the finishing touch to a victory that had been over two summers in the making.

Tomorrow, part two of our season review sees the red-ball resurgence continue against Essex and Worcestershire.