Any young cricketer looking for advice on how to grasp an opportunity would do well to seek out the rising Notts Outlaws star Matthew Montgomery for some first-hand tips.

The 22-year-old right-hand batter and off-spin bowler, whose 87 was key to the Outlaws launching their 2022 Royal London Cup campaign with a win over Sussex Sharks at Trent Bridge, is making a habit of seizing the moment.

Having made a century on his List A debut for KwaZulu-Natal in his native South Africa in January 2019 and a fifty on his South Africa Under-19s Test debut a month later, Montgomery launched his senior Nottinghamshire career by averaging a healthy 40.00 in his debut Royal London Cup season last summer.

This season has seen him make 80 on his first-class debut in England in addition to his competition-best 87 on Tuesday, which he believes reflects the progress he has made working with the coaches at Trent Bridge.

“I feel like I managed to take advantage of the opportunity the Royal London gave me in a young team last season, when I did relatively well in that I was consistent without there being a stand-out performance,” he said.

“But I think over the last six months working with [coaches] Peter Moores, Ant Botha and Paul Franks here at Notts my game has gone to a completely different place.

“And I feel there is a lot more I can do with them, so it is a very exciting time for me and I’m really happy with where I am.” 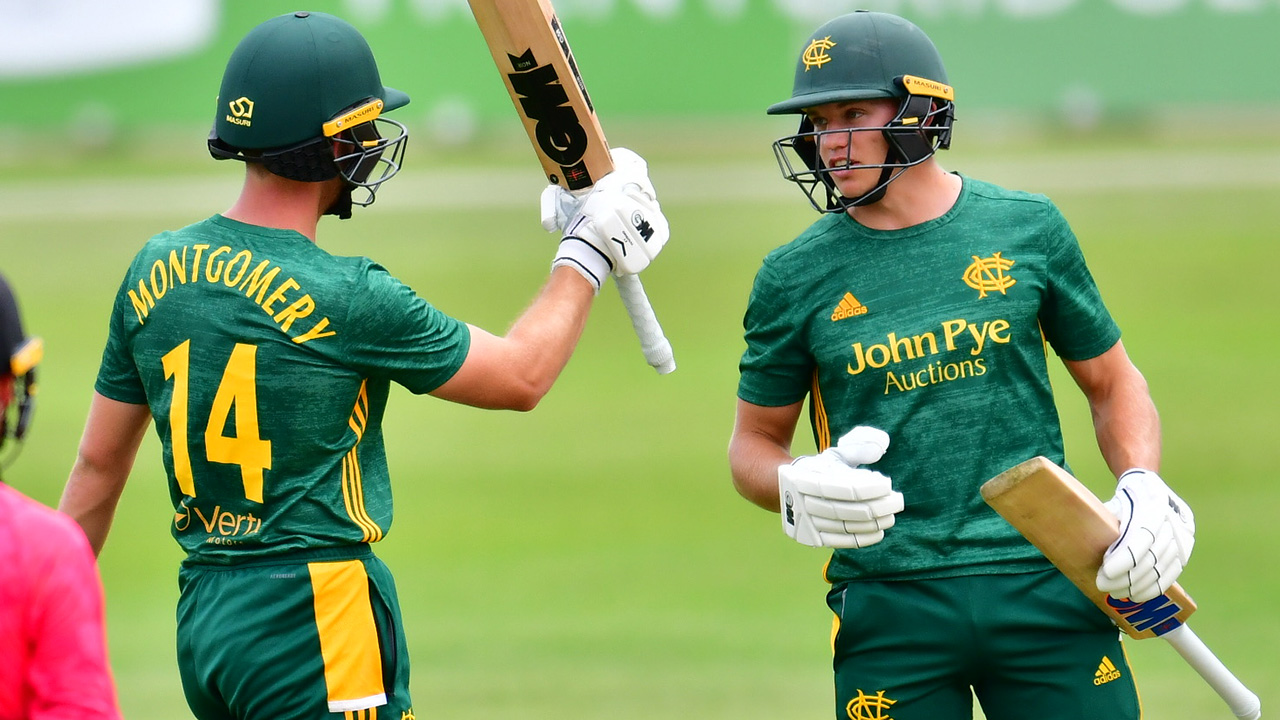 Montgomery has needed the virtue of patience, too, after seeing his development stall for a year when the Covid-19 pandemic struck.

At that point, he was in his first year studying finance and management at Loughborough University and was on Nottinghamshire’s radar, having caught the eye at the ECB Performance Centre on the university campus.

He had spent the 2019 summer playing club cricket in Yorkshire and the progress he made in 2021 might have come a year earlier had the world not gone into lockdown.

“It was pretty tough,” he said. “I’d been at Notts trialling and I’d had about three months of intensive training at Loughborough but then it all shut down. My family were back in South Africa and I spent most of the lockdown in university halls.”

After more trials at Trent Bridge when cricket resumed towards the end of the 2020 season, Montgomery made his Second XI debut in April last year - an opportunity he did not waste, scoring 147 against Warwickshire in his second match, which was enough to convince Nottinghamshire that his ability warranted a longer stay.

“I had a couple of good performances in the seconds and thankfully I got signed,” he said.  “It all happened really quickly in some ways and suddenly I was playing in the Royal London.

“It was a bit of a weird tournament in that we had quite a few rain-affected games and a couple that finished early when I was not out. But it was a good opportunity and I felt I took it relatively well.

“Playing under Peter Trego as captain was great. He is a charismatic guy and a really good captain. He was my captain in the Second XI too and brought a lot to the table and I’m thankful for the time I was with him.”

His impressive County Championship debut against Glamorgan last month confirmed the progress Montgomery has made.

“All the cricket I play at the moment is very important to my development and I couldn’t really have asked for more in terms of how my red ball debut went,” he said.

“My ambitions at the moment are to have a good tournament, to keep pushing and if I get more opportunities in the red-ball side to be able to put my hand up again.

“But it is really a matter of taking it game by game and seeing where it goes.”