Nottingham and Derby are linked by a road which it takes fewer than 20 minutes to traverse, and the two wider counties share a border that extends for upwards of 40 miles.

However, a meeting on the cricket field of the Outlaws and the Falcons rarely has the feel of one between neighbours on good terms with one another.

The two sides have met on 37 occasions in the shortest format to date, with those clashes producing 33 completed games.

Given the nature of the rivalry, it is hardly surprising many Outlaws have shone when up against the Falcons, and the fixture has produced plenty of noteworthy numbers throughout the two decades. 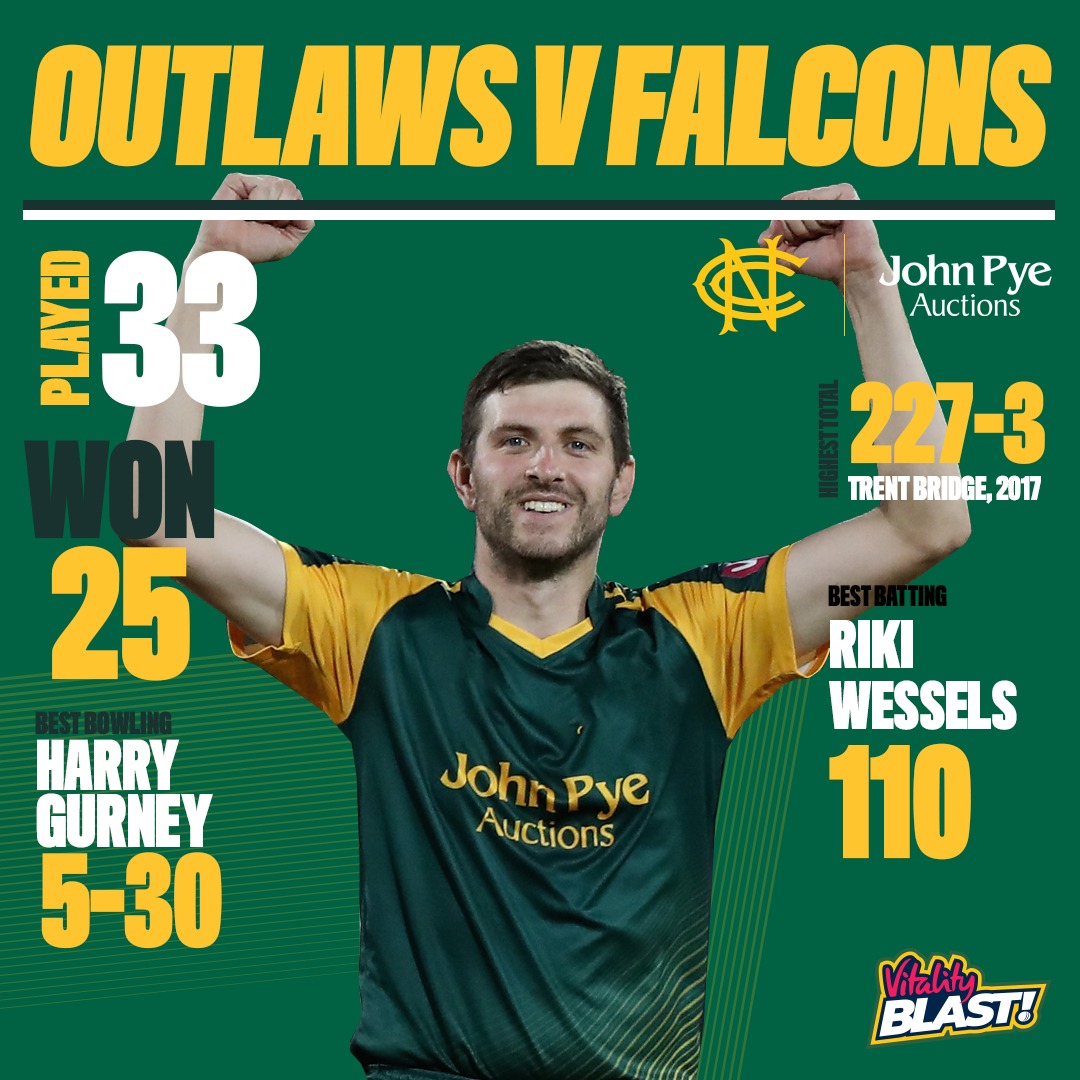 The weather has largely played ball throughout the history of this fixture, with just four washouts in two decades, and Notts have taken full advantage of being able to play so regularly.

The dominant Outlaws have won 25 of the 33 completed matches, losing just seven and tying the remaining one, to give themselves a win percentage of 76%.

That represents Notts’ highest win percentage against any of the ten sides they have played more than twice in Blast history.

227/3 – A record Outlaws total as Wessels wallops it everywhere

Though 2017 is a year that will, for obvious reasons, live long in the memory of the Notts faithful – especially when it comes to the side’s white-ball exploits – it was also a year when the Outlaws blew the Falcons away.

That year’s meeting of the two sides at Trent Bridge saw numerous batting records broken, with several of them as-yet-unbeaten to this day.

The Outlaws racked up their to-date highest ever T20 total of 227/3, as Riki Wessels struck 110 – still Notts' largest individual score against Derbyshire.

The Notts supporters who made the trip along the A52 to Derby in 2019 were rewarded by a truly special four-over spell from Harry Gurney, as the seamer returned the Outlaws’ fourth-best T20 figures ever.

Gurney took care of all of the Falcons’ top three, before completing his five-for with his final delivery, bowling Leus du Plooy from the final ball of the 18th over as he led the way in a 27-run Outlaws win.

As if that wasn’t enough, he also starred in the field by running out Alex Hughes for a diamond duck, as Notts went on to finish second in the North Group and ultimately return to Finals Day.

While cricket can certainly produce some niche statistics, this one was certainly buried at the back of the Trent Bridge records, but it is one that the Outlaws may take great delight in reminding the neighbours of.

Though there is often no quarter given in this rivalry, Derbyshire were clearly feeling rather generous on not just one, but two occasions, as the Falcons currently occupy both the top two spots in the list of most extras given to the Outlaws in a T20 innings.