The two-course meal was attended by around 60 people who have been involved in the landmark project, which invites people with dementia from the local community to monthly meetings at the ground.

Hosted by the Trent Bridge Community Trust, Forget Me Notts sessions provide a safe and secure environment that encourages social interaction using sporting memories and experiences as the prompt.

“Forget Me Notts has evolved into a regular get-together for people from all areas in Rushcliffe and Nottinghamshire.” Mandy Wright, Nottinghamshire CCC

Staff at Trent Bridge also lend a hand each month by listening to stories and assisting those from Age UK, who offer professional support.

A number of people with dementia who have taken part in sessions attended the lunch, along with their carers.

“Forget Me Notts has evolved into a regular get-together of around 35 people coming from all areas in Rushcliffe and Nottinghamshire,” said Mandy Wright, Community and Development Manager for Nottinghamshire. 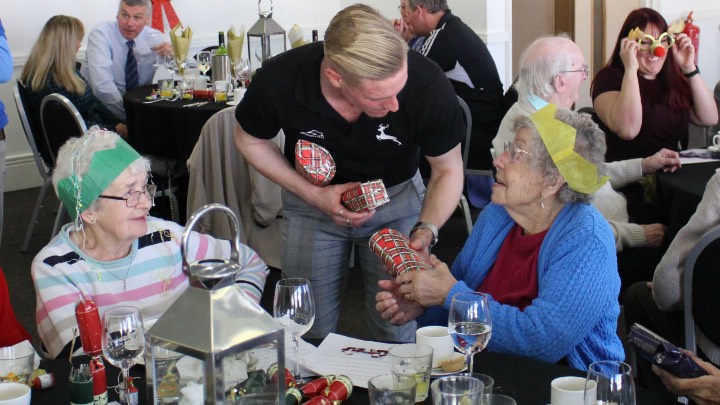 “The lunch has been an extension of that and is a great chance to welcome all those directly involved as well as thank our partners, without which we wouldn’t have been able to grow and establish the project.”

Janet Wilkinson and husband Chris, who cares for her, both attended the lunch, having attended the ‘brilliant’ Forget Me Notts sessions since August.

Janet said: “From day one it had such a nice atmosphere. We’ve met a lot of new people and made some new friends after only living in Nottingham for a year. Before that, we didn’t know anyone and it was quite lonely at times.

“We’ve met a lot of new people and made some new friends after only living in Nottingham for a year.” Janet Wilkinson, carer

“To be able to come to the cricket ground is wonderful. All the people at the ground are the friendliest people and go out of their way to be helpful.”

Linda Crick, Partnerships Director at Age UK Notts, has helped support the project, with her organisation letting older people know about the group.

“We had 12 people from our centre at the lunch and I can’t tell you how much it means to them to come to Trent Bridge. It’s absolutely amazing and heart-warming to see,” she said.

“It’s that camaraderie and the memories it brings back that is so important – one man first came to the ground when he was nine years old and remembers the grassy banks and no stands. 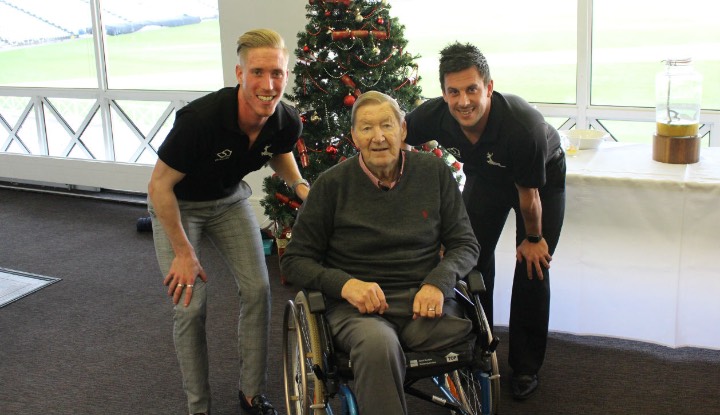 “That’s really, really important for people with dementia – focusing on the things that they remember rather than what they can’t.”

She said: “These events don't just happen and it was clear from the lunch that the dedication and hard work from everyone involved has certainly paid off.

“It was a real honour to meet the families and their relatives and see how much of a difference the project makes to lives within the community.” Faye Rollinson, John Pye

“It was a real honour to meet the families and their relatives and see how much of a difference the project makes to lives within the community. We are looking forward to supporting the project going forward.”

Mullaney, appointed to succeed Chris Read as skipper in November, described the event as a ‘fantastic occasion’ and one he was ‘really happy to support’.

“Anytime we, as players, can come and help and put smiles on people’s faces, especially at this time of year and with people who are less fortunate than we are, is great.” he said. "Hopefully we’ve made their Christmas a happier one.”

For further information on the Forget Me Notts project, please contact Mandy Wright on 0115 982 3000 or email mandy.wright@nottsccc.co.uk