LIBBY EYES AREAS FOR IMPROVEMENT IN 2018

Nottinghamshire opening batsman Jake Libby has identified key areas for improvement ahead of the step up to Specsavers Division One in 2018.

The 24-year-old hit a fine century in the four-day draw against Gloucestershire at Bristol this summer, but was disappointed he did not weigh in with more big scores.

That is something he hopes to rectify with Notts back in the top flight next season as the Club seeks to build on promotion from Division Two.

“This summer was OK, but frustrating at times,” said Libby. “I didn’t score the runs I would have liked to, but it was a good learning year for me.

“Trying to get in more and then trying to kick on with big runs is, ultimately, that sets you up for a good season.”

“There were some positives to take away, though, so I need to build on that for next season.

“My season could have looked a lot different if I had gone on after getting myself in, so that’s a massive one for me – making sure that when I do get in I go on and get the big scores.

“I also want to eliminate the lower scores as well so you can give yourself the best opportunity to get in and score the runs.

“It’s going to be a combination of those two, along with one or two technical things, that I’ll be working on. Trying to get in more and then trying to kick on with big runs is, ultimately, that sets you up for a good season.” 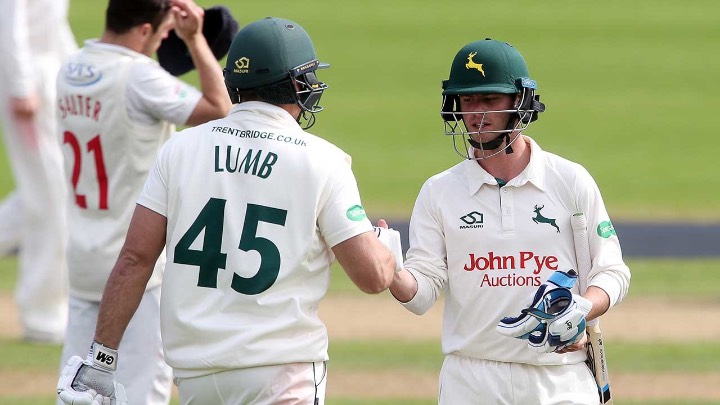 Libby made his debut for Notts in Division One and is delighted the Club are back after a one season hiatus to take on the likes of Essex, Yorkshire, Lancashire and Surrey.

Having now played in both divisions, he insists there is a marked difference between the two, but also points out the pitches at the higher level can be easier to bat on.

The former Cardiff MCCU player said: “It is a step up in standard, but we’re aware of that and with the couple of signings we’ve made and the squad we’ve got,  with a mixture of youth and experience, we can look to carry things on from last season.

“A Club the size of Nottinghamshire wants to be in Division One, so it’s good that we are back there. It’s a step up that, as players, we are all looking forward to and as a Club we are definitely good enough to do.”

“I’ve done well in Division One before, so there’s no reason why I can’t make runs there again.”

“In Division Two you just don’t get quite the same depth of bowling, but everyone is professional cricketers in both divisions and very good in their own right, so it’s tough wherever you are playing.

“But we’ve had some tough wickets to play on this season and I think Division One will be different wickets-wise, although the bowling will be just as good if not better and more of them.

“It’s going to be a great challenge, but I’ve done well in Division One before, so there’s no reason why I can’t make runs there again.”