Director of Cricket Mick Newell, Club Captain Steven Mullaney and new players Chris Nash and Paul Coughlin also gave their thoughts ahead of the new 2018 season, which is now just over a week away.

More than 170 guests enjoyed a drink in the Pavilion Long Room and then a three-course meal against the backdrop of the new Radcliffe Road Development.

They then listened intently as BBC East Midlands Today’s Colin Hazelden quizzed management and players – with more than the odd joke thrown in.

They spoke about the success of 2017 – promotion and two white ball trophy successes – and their aspirations for 2018 back in Division One.

“It’s a nice thing for me that last year’s success now seems a long time to go because we’re only looking one way – and that’s forward,” said Moores.

“I remember at Lancashire that I didn’t realise how much we would be targeted having won something, which is what we will need to be prepared for this summer. 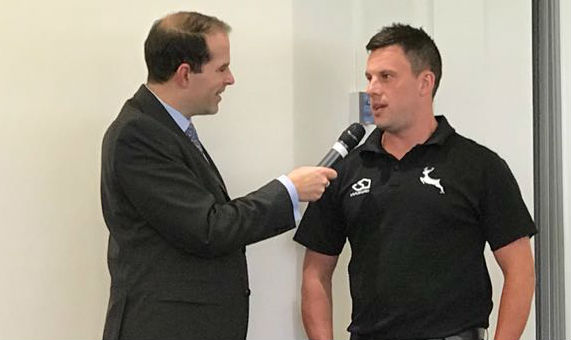 “It is a fantastic challenge. We love to watch players improve, both the younger ones and the seniors, and we will have to do that to stay competitive.

“We had some great memories last season and this year we want to create some more.”

Mullaney is excited to lead the team for the first time in a competitive fixture at Lancashire next Friday (13 April) at Lancashire.

“We can’t guarantee winning, but what we can guarantee is that the 11 players who take to the field will give their all.” Club Captain Steven Mullaney

He added: “We can’t guarantee winning, but what we can guarantee is that the 11 players who take to the field in Nottinghamshire colours will give their all. Every player in that dressing room has got each other’s back.”

Former Trent Bridge batsman Newell, who has been part of the management team since 1992, believes Notts can acquit themselves well at the higher level and is relishing the battle that lies ahead.

“We have got Ross Taylor coming to join us next week, an established international player, and we’ve worked hard as a Club to put ourselves in the best position to compete on all fronts.”