Stuart Broad’s expected return to Nottinghamshire’s ranks for their visit to Worcestershire is a ‘great boost’ for the team, says Head Coach Peter Moores.

The right-arm paceman collected his 400th Test wicket for England in the recent series out in New Zealand.

Due his international commitments, Broad has not played for the Green and Golds since the Royal London One-Day Cup Final at Lord’s last July, when Notts Outlaws beat Surrey.

“Stuart’s great to have around in the dressing room because he’s a thinker on the game and a huge competitor.” Head Coach Peter Moores

He is, however, available for the next three Specsavers County Championship matches, injuries permitting, with the Club’s first two home games of the new season against Hampshire (starting 4 May) and then Lancashire (starting May 11) to follow the visit to Blackfinch New Road.

“It’s great to have Stuart around because of his qualities as a bowler, especially as he’s coming off the back of a very successful series for himself personally in New Zealand,” said Moores.

“But he’s also great to have around in the dressing room because he’s a thinker on the game and a huge competitor. We had great influence from him in the first three months of last season, both in the Royal London and Championship matches. 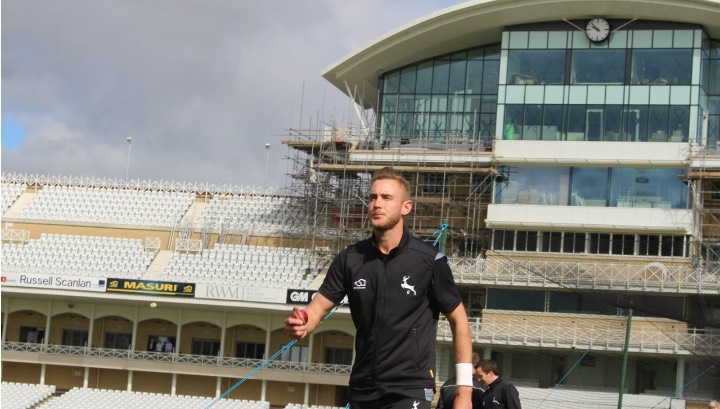 “To get him back in the group is great. It was classic Stuart in that he was 12th man in the game at Yorkshire to get around everything again – he’s a committed Notts player. To have someone of his calibre and quality coming back into the side is a great boost.”

While delighted to have Broad back in the fray, Moores admits it will be hard to decide who drops out of the side to make way for him.

“It’s not an easy decision, but a nice decision for us coaches in some ways when you know you’ve got four bowlers who are bowling well." Head Coach Peter Moores on leaving someone out for Broad to come in.

Moores added: “It’s not an easy decision, but a nice decision for us coaches in some ways when you know you’ve got four bowlers who are bowling well and someone has to be replaced by an England international opening bowler with a record like Stuart’s.

“It’s a great position for us to be in, albeit a tough decision and one we will make with the Captain (Steven Mullaney) over the next day or so.”