BLATHERWICK OUT TO LEARN FROM SENIOR PLAYERS IN OMAN

Jack Blatherwick is taking inspiration from the likes of Luke Wood and Brett Hutton as he bids to establish himself at first team level with Nottinghamshire.

Now the 19-year-old is hoping to push his claims for a senior debut in 2018 – just as others before him have done so by performing well at second team level.

“What happened last year showed that if you do well in the 'twos' then you can be rewarded with a first-team spot.”

Wood moved up to the first to take 18 wickets and score 199 runs in last summer’s Specsavers County Championship Division Two while Hutton – who has made a winter move to Northamptonshire – claimed 37 wickets and added 210 runs.

“I’ll be starting with the seconds and trying to take as many wickets as I can and then hopefully at the back end of the season I can put myself in contention for a first-team spot,” said Blatherwick.

“What happened last year showed that if you do well in the 'twos' then you can be rewarded with a first-team spot.

“The likes of Luke Wood and Brett Hutton took opportunities well when they came their way and cemented their spots and it would be great to do the same. 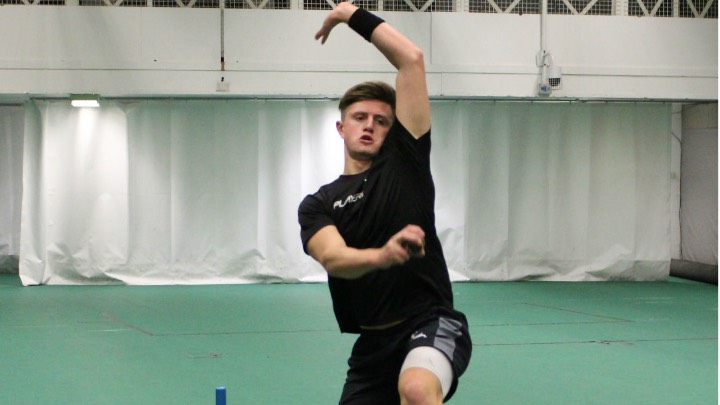 “The competition is hard – as we have some very good bowlers here – but it’s good to know that if you do well than you are likely to get a chance in the first team.”

Blatherwick travels to Oman today for a first-team bowling camp, with the current Academy intake also making the trip.

He is eager to listen and learn, with the likes of senior players Mark Footitt, Harry Gurney and Luke Fletcher and skipper Steven Mullaney all out in the middle-east.

“I’ll be looking to learn some new skills as well as just go through the basics – making sure my action is robust and repeatable.”

Blatherwick said: “I’m really looking forward to some warm weather training. It will be good to get some overs in before the start of the season.

“I’ll be looking to learn some new skills as well as just go through the basics – making sure my action is robust and repeatable.

“Obviously we will also be able to work hard on the fitness and that will be a big benefit once the season gets underway.

“It will also be good to be around the pros and see how they train. I will try to model myself on them and try to follow in their footsteps.”

You can join our family as a Member and secure seats in the Members’ Pavilion at discounted prices for the England v India Test Match this summer, as well as access to all Notts scheduled home games by clicking here..