FRANKS: KEEPER MOORES SHOULD BE ALLOWED TO BE HIS OWN MAN

Tom Moores should be given the opportunity to settle into the role as Nottinghamshire’s first-team wicketkeeper without regular comparisons to predecessor Chris Read.

That’s the view of Assistant Head Coach Paul Franks, after the 21-year-old has been given the nod to start as first choice gloveman in the 2018 season.

Read retired at the end of the 2017 season having spent 20 years at Trent Bridge, 10 of them as skipper, and holds the county record for most career dismissals with 983.

“At the Club, we don’t look on Tom as following on from Chris. That’s because it’s Tom’s time.”

Moores, however, was given his chance in Notts Outlaws’ T20 Blast-winning side last summer, scoring an important 57 in the win at Derbyshire Falcons and claiming the joint highest number of wicketkeeping dismissals in the competition – 13 – along with Sussex’s Ben Brown.

Franks said: “I will be really disappointed if, over the first six games of the new season, Tom’s constantly being compared to Chris Read, no matter how he does.

“At the Club, we don’t look on Tom as following on from Chris, which people keep talking about.

“That’s because it’s Tom’s time. I just want him to have a fair crack and not worry about what’s gone before because he can’t control that. 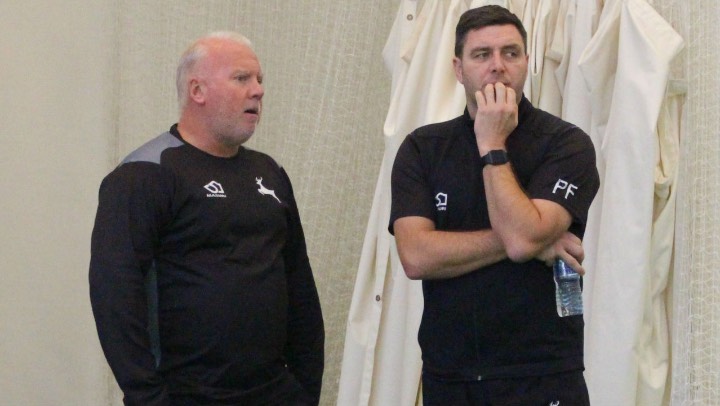 “Whenever people move on naturally, like Chris has done, someone else gets a chance to make their own way – and that’s the way we should view it. That’s what we’ll certainly be doing from a coaching point of view.”

Franks insists that he and the rest of the senior Nottinghamshire coaching squad had little hesitation in promoting Moores for Specsavers County Championship cricket.

The former Loughborough Grammar School student has benefited from working closely on his wicketkeeping skills with Read, who will be on the Notts coaching team on a part-time basis for this summer’s matches.

“I think Tom has shown last year, and over the time he’s been with us, the potential he has.”

Franks added: “You are always looking for the best option. We have got talented wicketkeepers within our group and Tom’s been very much at the front of that queue.

“I think he has shown last year, and over the time he’s been with us, the potential he has. He’s been impatient in a good way, because he wants to make his mark, and he’s had to bide his time a little bit.

“He’s been behind one of the best glovemen globally in Chris Read for the last two-and-a-half years, but now we are excited by what this year looks like for him and hopefully he will take to it and really run with it.”

You can watch every ball of Nottinghamshire's scheduled home matches in 2018 - in all three formats of the game including Vitality Blast - by joining our family as a Member. Adult prices start from £38 and you can become a Member by clicking here...