Alex Hales scored 47 off 24 balls but could not prevent England going down to a third consecutive tri-series defeat, losing by 12 runs to New Zealand in Wellington.

The Nottinghamshire batsman hit six fours and three sixes as he helped get his side off to a flying start following the early dismissal of Jason Roy, as they chased a mammoth 197 to win.

But the right-hander’s departure in the ninth over to fellow 2017 T20 Blast winner with the Notts Outlaws, Ish Sodhi, began a clatter of wickets that always left the tourists up against it. 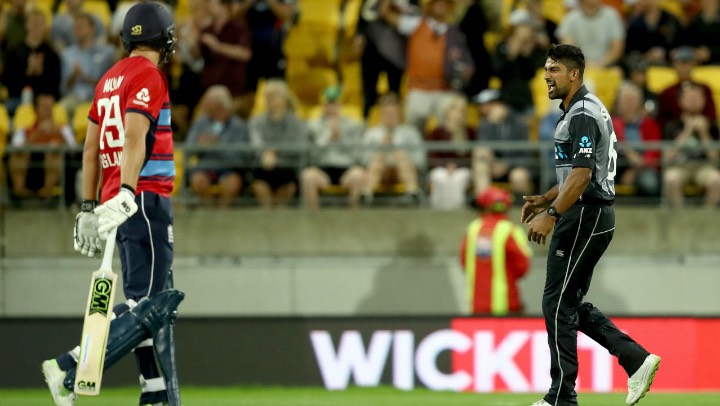 But Trent Boult took the wickets in consecutive balls of Chris Jordan and Liam Plunkett to extinguish England’s chances at the death and leave them bottom of the table behind Australia and the Black Caps.

Sodhi – who will be back at Trent Bridge for the onset of the Outlaws’ Vitality Blast campaign at home to Birmingham Bears on 4 July – also claimed the wicket of Jos Buttler and finished with 2-49.

New Zealand had earlier been put in by England and reached 196-5 in their innings as Martin Guptill (65 from 40 balls) and skipper Kane Williamson (72 from 46) led the home side’s charge.

Adil Rashid (2-36) was the most successful of England’s bowlers.

You can watch Stuart Broad and England take on India at Trent Bridge in this summer’s Test series, by securing your tickets here