It’s been a whirlwind few months for Will Fraine after signing his first professional deal for Notts in May.

This time last year he was lining up for the Notts second XI for the first time against Worcestershire at Lady Bay whilst still studying for his Sport, Exercise and Physical Activity degree at Durham University.

Now, just over a year on, he finds himself about to start his first T20 Blast game at Trent Bridge against Durham Jets tomorrow (Tuesday July 17).

It’s a chance that the Huddersfield born batsman is relishing after playing his first three T20’s on the road after trips to Northamptonshire Steelbacks, Leicestershire Foxes and Derbyshire Falcons.

“I can remember looking over at the floodlights and thinking hopefully one day I might be able to play there, but I never realised it might be happening so quickly, so I’m really excited to finally get a chance to play at home.

“We’ve had a few days on the road now with three games on the bounce, but it will be nice to be on the boundary and have a home crowd behind me – maybe they’ll say some nicer things than the away support will.”

In their last outing at Trent Bridge, the Outlaws suffered an eight-wicket defeat at the hands of Birmingham Bears in the opening fixture of the T20 Blast campaign.

But since that opening defeat Notts have won three games on the bounce on the road meaning they’ll arrive back on home soil full of confidence, and Fraine believes that the side owe the home crowd a performance after their disappointing defeat to the Bears.

“Obviously the team on that day against the Bears weren’t 100% for whatever reason," he said.

“Sometimes I think it doesn’t click and it doesn’t happen, but it wasn’t through fault of effort or not wanting to do well.

“Durham are a good side, but we’ll be full of confidence going into that game and hopefully we can hit our straps and put on a good show for them.

The last time the Outlaws faced the Jets at Trent Bridge, Riki Wessels and Alex Hales smashed a record powerplay total of 106-0 in a fierce display of power hitting. 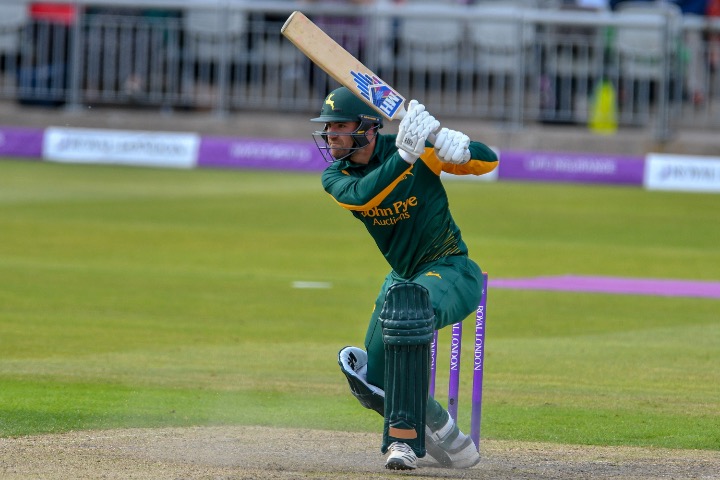 That put Notts on course to record a five-wicket victory with Hales plundering 95 from only 30 balls, almost equalling Chris Gayle’s record T20 hundred, which came from the same number of deliveries.

This season the Outlaws have continued to break records, with Dan Christian posting the highest individual score for a Notts player and the seventh quickest T20 century ever in his unbeaten 113* against Northants.

Despite the sides penchant for posting new records, Fraine says it’s not a conscious target for the side.

“We haven’t really spoke about breaking records,” he said.

“But I think one things that’s consistent with us in the dressing room is that, I think DC said it best, it’s the fact that people at the top of the order like Mooresy (Tom Moores), Riki (Wessels), Samit (Patel) and Mull (Steven Mullaney) they feel like they can go at a rate of how they want to go, and maybe try and break some records, because with the depth of our batting, we’ll always get a good score.

“We spoke about it at Leicester where we ended up getting 200 and we were nine down.

“With myself, Coggers, Fletch and Ish at seven, eight, nine and ten we’ve got a lot of depth to our batting and I think that’s why we can maybe target scores of 220 and 230 and massive powerplays.

"I’ve been doing my job pretty well and hopefully I can keep doing what I need to do for the team, get some experience and try to win games for Notts.”

“I think the lads are always excited to put in good performances, so it should be good.”

Before joining Notts, Fraine had only played four First Class fixtures for Durham MCCU whilst having spells in the seconds for Notts and Worcestershire.

But a string of strong performances over the summer, including knocks of 96 and 112 for Durham MCCU against Sussex in South Africa and a half century against Northants seconds for Notts, caught the eye of Head Coach Peter Moores.

Fraine was immediately drafted into the Outlaws squad to face Lancashire to make his debut and followed that up with two more List-A appearances before making his T20 bow in the victory over Northants at Wantage Road.

Despite only having a few first team appearances under his belt, the right-hander has adapted to the standard of county cricket quickly.

“Obviously the standard jump is huge – you find guys who have been doing this for years, they know their plans and they know exactly what they’re doing," said Fraine.

“But it’s really cool now for me because I feel like I’ve never really had a lot of security at clubs being a trialist, so now I’ve got that bit of security I can relax a bit and when you relax you play your best cricket. 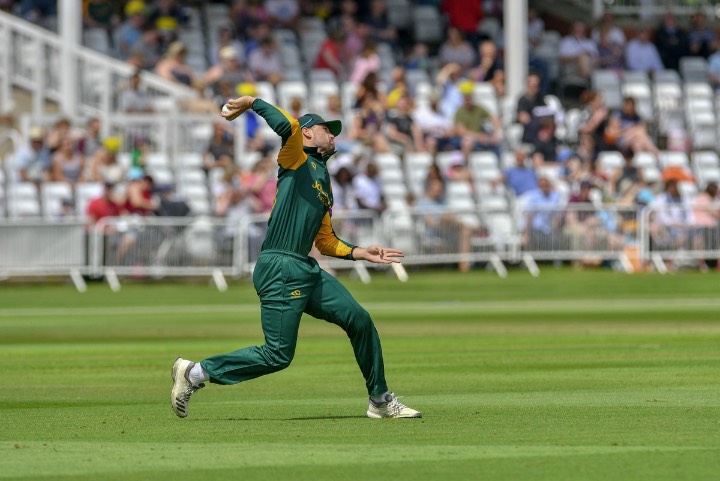 “I think that’s what I’ve been doing, and I’ve been doing my job pretty well and hopefully I can keep doing what I need to do for the team, get some experience and try to win games for Notts.”

Shortly after making his one-day debut for the Outlaws, Fraine suffered a knee injury whilst playing for the seconds in a clash with Durham at the end of May.

Whilst the injury was frustrating, the batsman was back raring to go quicker than expected but he still has to be cautious.

“I’m back fit and firing and I’ve got a nice little support on it whenever I’m in the field now,” he said.

“I’ve got to monitor it with Pipey (James Pipe) the physio but it’s good – I’ve got a lot of icing to do and I’ve got a gym programme to follow but it’s just one of them things.

“I was a bit unlucky and it was frustrating at the time to pick up an injury, but I managed to really get back within three weeks of dislocating my knee.

“I was really excited to get back because when I did it I wanted to hurry up and get back playing as quickly as I could.”

“It’s amazing to see someone that you’ve been watching on tv for years telling you ‘you can do this, we believe in you’ so it’s a great environment to be in."

Since joining the Outlaws the youngster has had the opportunity to learn from a raft of experienced players, both Notts’ own and overseas talent, and Fraine has wasted no time in trying to learn from the best.

“I’ve bitten the ear off of a few people like Ross Taylor and I’m spending a bit of time with Ish Sodhi now," he said.

“It’s amazing just to pick their brains and coming into an environment and a competition like this, you’re going to be nervous and maybe question yourself a little bit, but it’s how you deal with that.

“Being around people like Mull (Steven Mullaney), Nashy (Chris Nash), Fletch (Luke Fletcher), there’s too many of them to name, and everyone in the changing room has welcomed me so well because everyone backs you.

“It’s amazing to see someone that you’ve been watching on tv for years telling you ‘you can do this, we believe in you’ so it’s a great environment to be in.”

Riki Wessels re-joins the squad after missing the Derbyshire game for family reasons. He comes in for Paul Coughlin, who is rested to continue his rehabilitation on his shoulder injury.

Christian Stars as Notts Make it Three Wins On The Bounce

Who Am I? Harry Gurney And James Pipe

PreviousMake The Most Of Your T20 Visit v The Jets NextWickets Tumble On Opening Day Of Seconds' Friendly at Old Trafford
TWEETS
Tweets by @TrentBridge
NEXT FIXTURE
UNI
22 March 2022 at 00:00
Trent Bridge
Nottinghamshire CCC
Loughborough UCCE