Trent BridgeMENU
FALCONS PREVIEW: Keeper-batsman Moores feels he is learning all the time
INTERNATIONAL CRICKET
IN 2022

FALCONS PREVIEW: KEEPER-BATSMAN MOORES FEELS HE IS LEARNING ALL THE TIME

So much has changed for Tom Moores since he made his first half century in the Green and Gold of the Notts Outlaws at Derbyshire almost 12 months ago, but his thirst for scoring runs remains an undiminished constant.

The 21-year-old was still very much feeling his way in the environs of the dressing room at Trent Bridge when he struck an important 57 from 34 balls at the 3aaa County Ground, with six fours and three sixes, in what was a pivotal match in an ultimately successful campaign.

Lose, and Notts may have struggled to overhaul their neighbours in the race to reach the knockout quarter-finals. But the eight-run triumph, which Jake Ball and Harry Gurney helped secure with excellent bowling at the death, helped the Outlaws go from strength to strength as they eventually topped the North Group on their way to the title.

Since that seminal moment, Moores has also flourished individually, with his first achievement of note being to finish joint top of the dismissals table in last year’s T20 tournament, along with Sussex’s Ben Brown, on 13.

But it is in 2018 that the Brighton-born player has really come into his own following the retirement of long-serving club legend Chris Read, who has now linked up with the Club’s coaching staff following the completion of the summer term at Uppingham School.

“I think you are always learning, and I feel like I am learning quite a lot, quite quickly at the moment.”

In Specsavers County Championship cricket, Moores has been a redoubtable performer both with the gloves and bat in hand.

Behind the stumps, he has claimed 26 catches, several of them spectacular, with glovework of which Read would have been proud, making him the leading wicket-keeper in Division One after the first eight games of the 2018 summer.

Not only that, he also tops the Club’s batting averages, above proven performers such as Ross Taylor, Jake Libby, Riki Wessels, Samit Patel, Steven Mullaney and Chris Nash, with 479 runs at an average a touch shy of 40. His 14 sixes is five more than his nearest challenger, Matt Renshaw.

That includes a breakthrough maiden first-class century of his career, 103 from 117 balls, at Somerset, which, while in a losing cause, showed his appetite for the fight in difficult circumstances.

As he heads back across the A52 tomorrow night, it is that kind of form Moores hopes to repeat in the Vitality Blast this summer, particularly after finding his range in his last outing by scoring 51 from 30 balls on Sunday, as the Outlaws completed victory at Leicestershire Foxes. 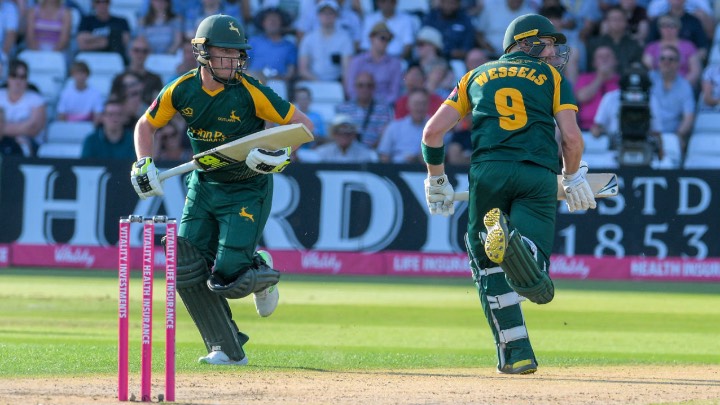 “I’ve happy memories from the last time I played at Derbyshire,” he says. “I was just starting out, and it was an important game in my Notts career, contributing runs to a win in a big game.

“I have learned so much since then. I think you are always learning, and I feel like I am learning quite a lot, quite quickly at the moment.

“Playing first team cricket and playing in the big games is great, and what you’re in it for. I feel like my game is evolving and getting better and hopefully I can continue that to improve my consistency.

“I was really pleased with the way I played at Leicestershire at the weekend and it’s always pleasing to contribute to a win.

“It was nice to get a fifty as well and spend some time in the middle and hit a few nicely in what was a great team performance from us.

“A few more decent knocks in the tournament would be nice and hopefully I can back up what I’ve done at Leicestershire and get some more runs at Derbyshire this year.”

“I’d had a bit of a tough start. It was a bit rusty from us all in the first game, but I felt pretty decent and was out to a pretty decent catch, which is fair enough.

“The Northants game I felt in good touch again but unfortunately couldn’t carry it on, so I have felt a decent knock was around the corner and hopefully I can build on that in the rest of the tournament now.

“A few more decent knocks would be nice and hopefully I can back up what I’ve done at Leicestershire and get some more runs at Derbyshire this year.”

The 19-run win at the Fischer County Ground Grace Road was, in most onlookers’ eyes, more comfortable than the scoreline suggested, given the Foxes were well behind the asking rate before a late flurry from Mohammad Abbas.

The success was based around the contributions of Moores, Samit Patel (52) and skipper Dan Christian (47) that allowed Notts to post 199-8 batting first, before four bowlers – Ish Sodhi, Mullaney, Patel and Christian – combined to restrict the hosts to 180-9. 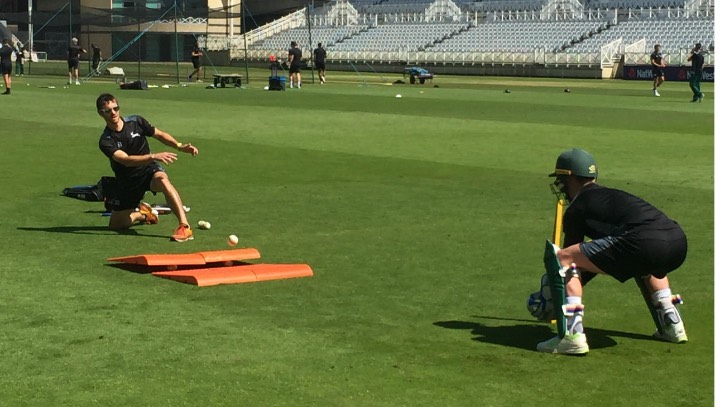 Moores feels the Outlaws are starting to get back in the groove they found last season after a disappointing defeat in their opening encounter, against the Birmingham Bears at Trent Bridge.

He adds: “That was more like the Notts Outlaws of last year. Our batting keeps coming, it’s pretty relentless, and we have got batters firing, with the way DC and Samit are playing.

“The way T20 is and the way we choose to play, it can be a bit hit and miss at times as to whether you get runs, but we also know that consistency is key for winning teams. We are always striving to improve, but it was nice for us to do it at the top of the order.

“We have still not seen the best of some people in this tournament yet, so it’s a good sign that we are still winning with people who have plenty in the tank to give.

“When they get going, and with Alex Hales to come back in as well, hopefully it will make us a tough side to beat as the tournament goes on.

“We are just trying to stay in the moment, which I think is key in T20, backing performances up to keep winning.”

“It’s a good place for us to be and I’m excited to see what we have to come. We are just trying to stay in the moment, which I think is key in T20, backing performances up to keep winning.”

Like everyone else, Moores was amazed at the contribution of Christian in last week’s win at the Steelbacks, where the skipper scored an Outlaws-best T20 individual score of 113 not out from 40 balls, smashing seven fours and nine sixes.

He is hopeful that, batting at number three, he will have the opportunity to go to three figures in the Blast at some point, if not this season then maybe in future campaigns.

“If you’re batting at three, stay in, and keep finding the boundary, then a century is always a possibility,” he insists.

“But you try not to think about those things really. It’s one of those where you’re just trying to get the runs and if it happens then it’s a bonus. 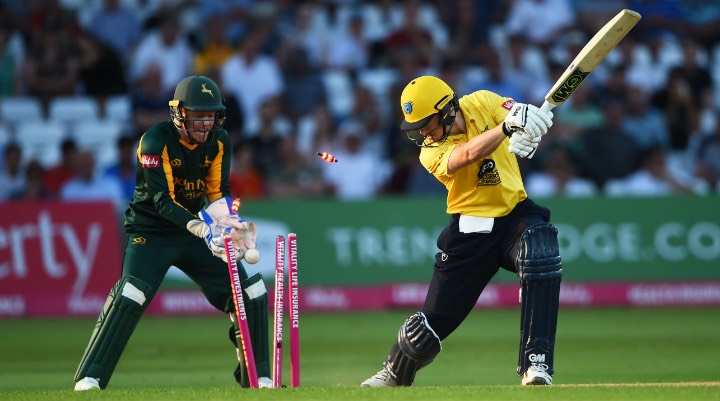 “It’s only happened for me, scoring a ton, once so far (at Somerset) and it was one of those days, like DC had at Northants, where everything just kept going to the boundary or for six.

“We all hope to keep doing that, but we all know the nature of the game, playing aggressively, is that it’s high risk and you can get out for low scores.”

After a hectic end to June and beginning of July, Notts have enjoyed a welcome few days without a match leading into their short trip to the Falcons.

Moores believes it will help the team re-energise ahead of five more Vitality Blast and one Specsavers County Championship match against Surrey before the month is out.

He says: “It’s always nice to get a couple of days off and it’s been important to make the most of them by regrouping before coming back into training ready to face Derbyshire.

“As a team, if we all perform at our best, we have shown that we can build big totals and have the bowling to compete in every match we play.”

“The lads are looking forward to it and we’re hoping we can keep the winning run going now we have started a bit of one.

“As a team, if we all perform at our best, as a lot of us did at Leicestershire, we have shown that we can build big totals and have the bowling to compete in every match we play.”

Nottinghamshire will be without batsman Riki Wessels, who misses the game for family reasons, and will be replaced in the squad by Jake Libby.

The hard-hitting 32-year-old will, however, be back in contention for the home games against Durham Jets on Tuesday and Leicestershire Foxes next Friday (both 6.30pm start).