A bamboozling spell from Kuldeep Yadav saw him claim best-ever figures by a spinner against England in a One-Day International to propel India to a comprehensive, eight-wicket victory at Trent Bridge.

The 23-year-old left-arm wrist spinner claimed 6-25 – unsurprisingly his best figures in the format – to enhance his burgeoning reputation and consign England to 268 all out on an excellent batting wicket after they had been cruising at 73-0.

Jos Buttler (53) and Ben Stokes (50) dug in through the middle of the innings after Jason Roy and Jonny Bairstow (both 38) had got England off to a bright start.

But it was never likely to be enough against a strong India batting side, who cantered to their target in 40.1 overs, with a superb 137 not out from Rohit Sharma.

Having been put in, Jason Roy and Bairstow got the hosts off to a flying start, recording their 10th partnership of over 50 at the top of the order.

Bairstow, having survived a close lbw shout from Umesh Yadav in the opening over, brought up that milestone by thumping a short ball from debutant Siddarth Kaul for six over mid-wicket.

But the partnership was quickly ended following the introduction of Kuldeep Yadav as Roy tried to reverse sweep him, but succeeded only in finding the hands of Umesh Yadav.

Replacement Joe Root did not last long as he was pinned lbw by a hard-spinning chinaman from Kuldeep that was hitting top of middle.

And the young Indian spinner was celebrating again when a googly deceived Bairstow and, though he was initially given not out, the decision was overturned on review.

Eoin Morgan and Stokes took their time to play themselves in as they looked to rebuild before the former brought up the 100 by thumping Hardik Pandya for a maximum. 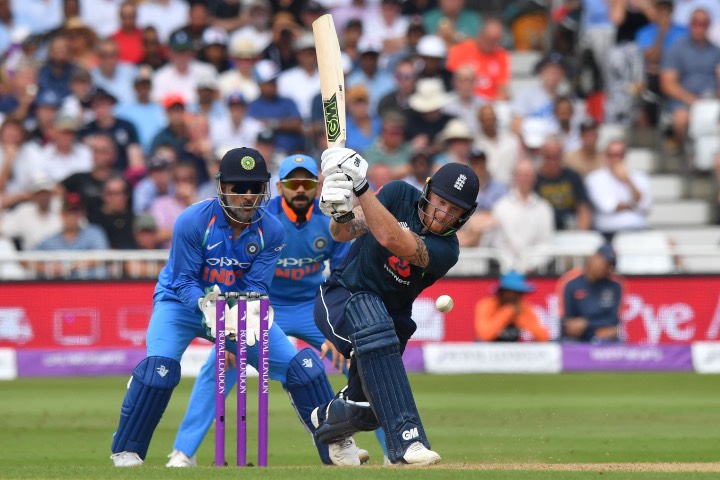 But just as the skipper was finding his feet, he was fourth out for 19, with the score on 105, as he chipped a catch to Suresh Raina off the bowling of Yuzvendra Chahal.

At that point, England badly needed a steadying partnership, which Stokes and Buttler provided, with the latter looking assured to record a 45-ball half century.

However, the Lancashire man fell for 53 off 51 balls as Kuldeep came back to pick up his fourth wicket, keeper MS Dhoni taking a sharp catch down the legside to end a 93-run stand.

Stokes’ battle to find his form was summed up in that it took him 102 balls to get to fifty in the 44th over, with just two fours – the third slowest by an Englishman in ODIs.

The Durham man got no further, however, as from the next ball he faced, Kaul took a fine, diving catch to pluck a reverse sweep out the air and hand Kuldeep his five-fer.

And it got even better for the wrist spinner from the final ball of his spell as David Willey (1) pulled him straight to Lokesh Rahul, leaving England on 216-7.

Moeen Ali (24) managed a few lusty blows, including a well-timed pull for a maximum off Umesh, but the bowler exacted his revenge by having the Worcestershire man caught in the deep by Virat Kohli.

Adil Rashid (22) moved England beyond 250 by ramping Kaul for six, only to scythe Umesh’s low full toss to Pandya, while the innings ended with one ball left as Liam Plunkett (9) was run out attempting a second run.

India could afford to take their time in reply, but were soon up and running and put on a quickfire 59 for the first wicket before Shikhar Dhawan perished trying to hit Moeen Ali over the top, only to slice to Adil Rashid for 40 off 27 balls.

The arrival of visiting skipper Virat Kohli brought the Indian support in a sell-out 17,007 crowd to life and, alongside Rohit Sharma, the pair brought up the 100 in the 15th over. 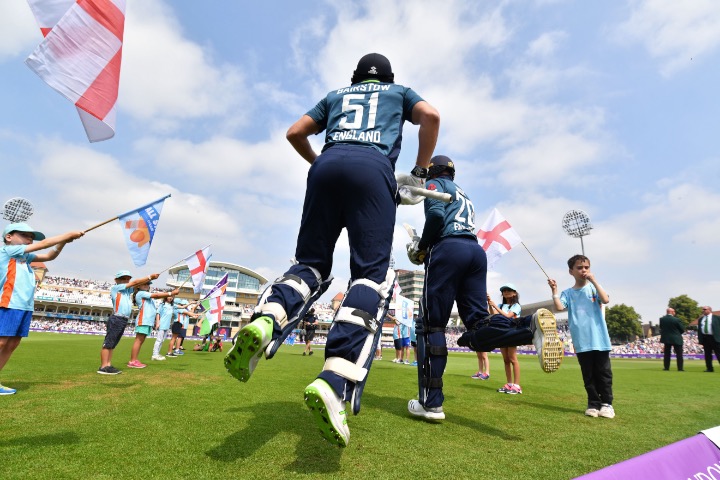 Sharma was the first to go to fifty from 53 balls with six fours and one six and Kohil was not long in following, bringing up the landmark from 56 balls with a thumping drive off Mark Wood, his fifth boundary.

Opener Sharma deposited Ali into the Larwood and Voce Stand and then also lofted him over long off as he accelerated in nearing three figures.

But he did have one moment of good fortune when he cut Plunkett to a diving Roy when on 92, only for the fielder to let the ball squirm from his grasp.

Sharma – who also scored an unbeaten ton in the final Vitality IT20 at Bristol – went to his second hundred in as many matches for India when he drilled Rashid straight down the ground for his third six.

Long-time partner Kohli eventually departed for 75 (from 82 balls, seven fours) as he was stumped by Buttler to give Rashid a wicket his persistence deserved, with the two having put on 167 in 25.1 overs.

But Sharma and Lokesh Rahul (9 not out) had few problems in guiding India to a 1-0 lead in the three-match series.