Organisers of the OVO Energy Tour of Britain, the UK’s most prestigious cycle race, have today [Friday) called on Nottinghamshire and the rest of the country to produce eye-catching land and water art alongside the route of this year’s 1,140-kilometre event.

The tradition of creating land art masterpieces along the route has long been the practice at the OVO Energy Tour of Britain, as well as other cycle races around the world, but this will be the first time that The Tour has held a competition to find the best piece of land art, with the winner due to receive a trophy and commemorative Tour of Britain prizes.

Community groups, schools, businesses and land owners across Britain will be encouraged to take part in the competition during the OVO Energy Tour of Britain, which takes place from Sunday 2 to Sunday 9 September with Nottinghamshire hosting the longest and penultimate stage on Saturday 8 September.

The national competition was launched at the iconic Trent Bridge Cricket ground, which is on the route of the Nottinghamshire stage which will starts in West Bridgford and due for a thrilling finale in Mansfield.

Nottinghamshire County Cricket Club all-rounder Paul Coughlin said: “We are lucky to regularly play in front of big Trent Bridge crowds, so I know the riders are going to really enjoy coming to Nottinghamshire for the Tour of Britain, where I’m sure spectators will come out in force.

“The land art competition is a fantastic initiative to spark interest in the race, and one that everyone can get involved with. I’m looking forward to seeing what people in the county come up with for their entries.” 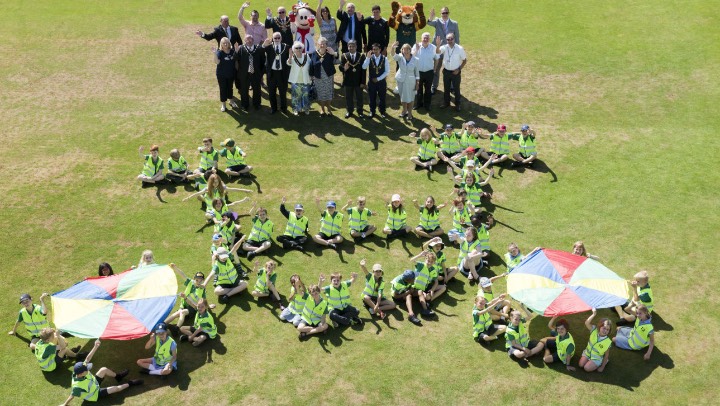 Councillor Kay Cutts, Leader of Nottinghamshire County Council said: “It’s a great testament to the success of last year’s race that national organisers have chosen our county to launch this exciting competition. Nottinghamshire people came out in their thousands to line the race route which added a tremendous sparkle to the event.

“At 223kms, we are hosting the longest stage - so our county has a fantastic opportunity to get involved and hopefully a winner will be found here in Nottinghamshire.

“Last year we had so many examples of magical landart moments provided by schools such as John Blow Primary School in Collingham and Newstead Primary School, not to mention Girton Sailing Club’s bike made of boats and the much-talked about sheep creation by Coddington-based farmer Des Allen.”

“We were staggered by the response that our small efforts received last year. We did it as a bit of fun and the response was fantastic. I would urge people to have a go; from a little bit of effort it is sometimes amazing the response you receive.”

Find out more and how to register your planned land art with race organisers where you can also find some useful tips and advice to aid your creativity, plus a ‘best of landart 2017’ video clip which features the Coddington sheep art as well as Girton Sailing Club’s bike of boats, plus a field with a giant ‘Retford’ sign. 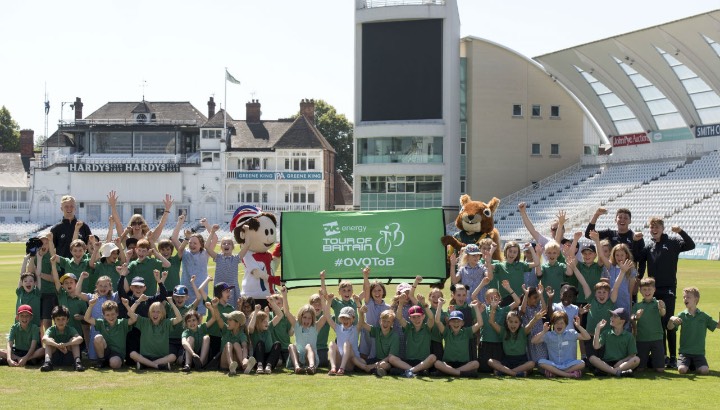 Find out more and how to register your planned land art with race organisers, please visit www.tourofbritain.co.uk/land-art where you can also find some useful tips and advice to aid your creativity, plus a ‘best of landart 2017’ video clip.

A panel comprising Mick Bennett; ITV4 presenters Matt Barbet and Yanto Barker; and representatives from race organisers SweetSpot will decide the top three pieces of art at the end of this year's event.

“We are delighted to be adding this land art competition to the ways that communities across the country can get involved in the race this September,” said OVO Energy Tour of Britain Race Director Mick Bennett.

“Last year’s Nottinghamshire stage in particular saw several fantastic examples of land art created by community groups, and this has inspired us to encourage people across the route this year to show their support and get creative. Over the coming weeks we will see countless examples of land art during the Tour de France, which will inspire people’s creativity.”

The winner will receive a trophy and commemorative Tour of Britain prizes, presented in person by Mick Bennett, while the runner-up and third-place finisher will also take home trophies for their efforts.

The race, Britain’s most prestigious international men’s stage race on the UCI calendar, is sponsored by OVO Energy, the UK’s largest independent energy company for the second successive year.

Save money by securing your T20 tickets this summer in advance, with Durham the next to visit on 17 July. Secure your seats now.