Nottinghamshire Head Groundsman Steve Birks has revealed that the superb Trent Bridge wicket that saw England hammer a world record total of 481-6 was the same pitch used to rack up the previous best mark in 2016.

Birks and his devoted team were delighted to see Alex Hales (147) and Jonny Bairstow (139) notch centuries and Jason Roy (82) and Eoin Morgan (67) also prosper on a surface that visiting Australia skipper Tim Paine described as terrific for batting.

It was the same 22-yard strip on which Hales smashed 171 and England 444-3 two years ago against Pakistan, meaning the two highest ODI totals in history have now been recorded at Trent Bridge.

“We were very pleased with how the pitch played and it was fantastic to see the England boys knocking it around,” said Birks.

“I love to see Alex Hales getting runs here because you can see him smiling, the crowd goes up and everyone is happy.”

“I love to see Alex Hales getting runs here because you can see him smiling, the crowd goes up and everyone is happy.

“You might have a little drink of whisky by yourself and give yourself a pat on the back, but then you carry on, because it can bite you in the backside if you don’t.

“It makes it a pleasure coming to work, but once it’s over you then have to move on quickly to the next game, and in our case we have a day-night match coming up on Monday (against Worcestershire). 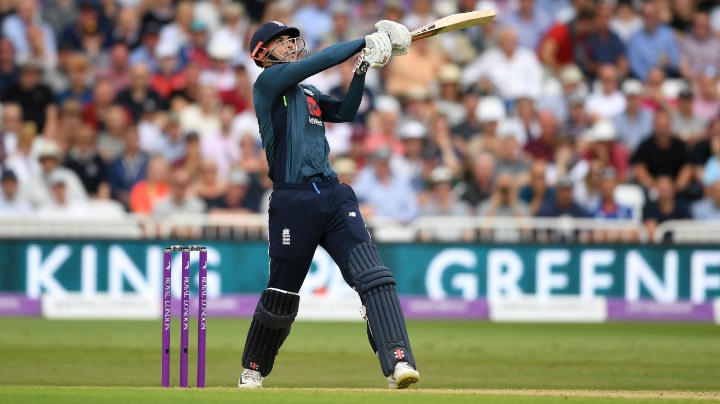 Birks is ably assisted at Trent Bridge by Senior Groundsperson, Richie Woodmason and Assistant Groudsmen Andrew Selway-Duncan, Richard Marshall and Tom Love, but an equally valuable part of the hard-working team are based over the road at the Lady Bay Sports Ground.

The home of the Second XI and also a venue for women’s and junior matches is cared for by Ground Supervisor Guy Toulson, Deputy Head Groundsman Frank Dalling and Assistant Groundsman Darryl Townsend.

Between them, they have years of experience to call on, but they are still at a loss to explain why this particular pitch consistently produces high-scoring pitches.

Birks added: “It’s just one of those pitches… one England got the other world record with. It’s just a fantastic pitch to roll out and whatever you seem to do with it, it seems to be a belter nine times out of 10.

“It’s just a fantastic pitch to roll out and whatever you seem to do with it, it seems to be a belter nine times out of 10.”

“We re-laid it about 20 years ago when I was first on the ground staff here along with another one which we have since dug up because it didn’t turn out to be that good.

“But this one we have worked on and worked on and, for some reason, plays really well. It looks no different to any other pitch and we do nothing different on it to our usual preparation, but it just turns out to be a magnificent one-day pitch.

“It was a bit windy in the lead-up and we were also working on the quarter-final pitch next to it, which made it a bit tricky. But with management from the rest of the lads and myself, we thankfully we managed to get it spot on.”

Missed out on watching England’s world record score? Don’t miss out on seeing them in this summer’s Trent Bridge Test match against India. Book today for £20 tickets.