Incumbent Outlaws T20 skipper Dan Christian’s superb 61 off 25 balls led the Aboriginal XI to victory over a Notts XI in the second match of a double header at Trent Bridge.

After the tourists’ women’s team had been well beaten by an experienced England Women’s Senior Academy side, the men gained some revenge with a 61-run success.

Christian, who will skipper the Outlaws in defence of the Blast title they won for the first time last summer when they host the Birmingham Bears in a repeat of last year’s final on Wednesday 4 July, smashed six sixes and three fours as the Aboriginal XI posted 182-6.

The hosts never really looked likely to complete a successful run chase against a capable Aboriginal XI attack and fell some way short on 121 all out.

Encouragingly for Notts, though, both Harry Gurney, returning from a calf injury, and Luke Wood, who has been ill after recovering from ankle trouble, got through their allotment of overs to put themselves in the frame for Thursday’s Royal London Play-off at home to Kent (11am start).

As the Aboriginal XI won the toss and batted first, opening pair Damon Egan (22) and Brendan Smith added 67 for the first wicket before the former was caught by Lyndon James off Gurney.

Smith wasted little time in scoring his 41 until he was bowled by seamer Kamau Leverock, leaving the visitors on 79-2. 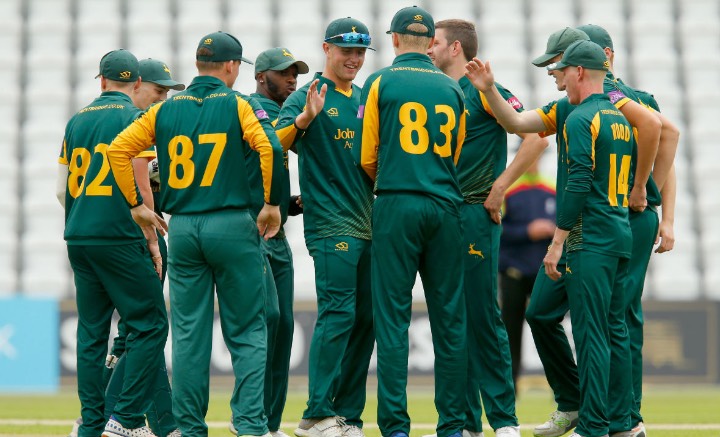 Brynley Richards was then bowled for a duck by one from Liam Patterson-White that turned past his outside edge, while Christian, one ball after he should have been caught in the deep when the ball was not picked up by the fielder, was taken by Saad Ashraf at deep long on off Jack Blatherwick’s bowling.

Brock Larance hit two sixes in Wood’s final over to finish on 30 not out as the Aboriginal XI set an imposing target.

As the Notts team began their reply, Solomon Budinger (3) went early as he picked out Pattison from the bowling of Brendan Doggett.

Teenager Joey Evison (14) clumped Christian – 19 years his senior – over backward square leg into the Smith Cooper Stand for six but in attempting to clear the in-field again against Sam Doggett, holed out to Larance, who was running back from mid-off.

Replacement Gibson (2) was pinned lbw by the spin of Pattison and Tom Keast went without scoring as he picked out Smith off Christian, putting Notts in trouble at 47-4.

Luke Wood played a fine knock to make his way to 41 from 30 balls before playing back to Larance and being pinned lbw trying to work the ball to leg and was soon followed by Nick Kimber (9) as Christian took a running catch to give Nick Boland a wicket.

Liam Patterson-White (12) did his best to push the scoring along, but eventually skied Larance to Ben Pattinson at point, while Leverock (2) was castled by Sam Doggett and Lyndon James skied a slower ball from the same bowler to be taken by Nick Boland.

Jack Blatherwick (6) launched a big six into the Hound Road Stand but then was bowled by Larance from the next ball as Notts were bowled out after 17.4 overs.