Nottinghamshire’s Jake Ball feels he is bowling ‘as well as ever’ and is now better prepared to take any chance that comes his way after being called up to England’s one-day squad.

The 27-year-old seamer has been named in the 16-man squad to take on Australia in the five-match Royal London series, starting next Wednesday, 13 June, at the Kia Oval.

Ball’s winter tour of Australia was disrupted by an ankle injury, hampering his preparations for his only Test of the Ashes series at Brisbane.

He played in the final match of the ODI series at Perth, which England won 4-1, only to be left out of the first Test series of this summer against Pakistan.

“In white ball cricket, I feel I have matured a lot and know my game so much better.”

However, Ball has been in superb form domestically with the Green and Golds, taking 27 Specsavers County Championship wickets in the first five games of the season – more than any other bowler in Division One.

He has also added 10 wickets in six Royal London One-Day Cup games, where the Notts Outlaws need to beat neighbours Derbyshire in their final North Group game on Thursday (2pm start) to reach the knockout stages.

“I’m obviously really pleased to get this call-up,” Ball told trentbridge.co.uk. “Now I have this opportunity, it’s important that I take it – and I feel I’m in a great position to do that.

“I feel as if I’m bowling as well as I ever have done – certainly in the last couple of years. In white ball cricket, I feel I have matured a lot and know my game so much better.

“If the chance to play comes along, then I feel I’m in a much better space than I was a year ago.” 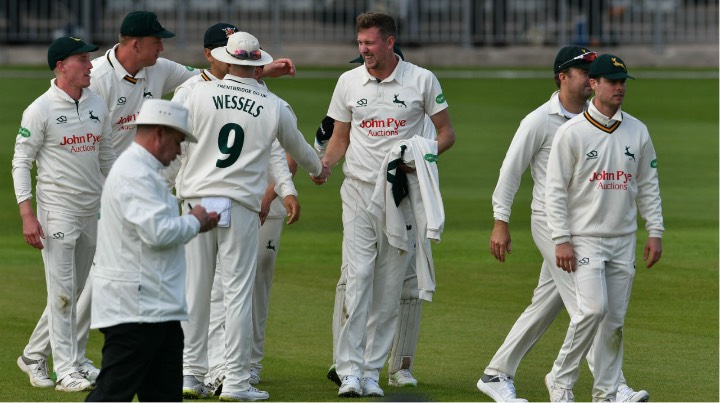 Ball has been drafted into the squad because of a quad injury to all-rounder Chris Woakes.

The former Welbeck CC player has every sympathy for the Warwickshire man, who took key wickets as England hit back to draw the Test series against Pakistan at Emerald Headingley.

Ball said: “It’s not the way you want to get back in – through injury – but unfortunately that’s often how it happens.

“Chris is a close friend of mine, and I feel for him because you never want to see a fellow bowler injured, but, at the same time, I have to try to make the most of this opportunity.”

“To play in front of family and friends, and a big Trent Bridge crowd, which I know from domestic matches is very special, would be brilliant.”

Two weeks today, England will be in Nottingham for the third match in the series at Trent Bridge – a match in which Ball would love to play.

“It would mean a heck of a lot to me if I could be involved in that one,” said Ball. “I’ve been in the squad a few times for matches at Trent Bridge, but I’ve not managed to pull on the Three Lions yet at the ground.

“What would make it all the more amazing, were it to happen, is that a lot of my friends and family tend to come to the ground for internationals.

“To play in front of them, and a big Trent Bridge crowd, which I know from domestic matches is very special, would be brilliant.”