Nottinghamshire’s Second XI were the victims of a superb run chase from the MCC Young Cricketers, led by centurion Kashif Ali, in going down to a four-wicket defeat on the final day of their three-day County Championship match at Lady Bay.

The visitors were set an imposing target of 369 to win from 74 overs, and such hopes looked unlikely when they were 129-4.

But Ali, with capable support from Fynn Hudson-Prentice and Jakob Bhula, were undeterred to stun Notts and claim 23 points to the hosts’ eight.

Joey Evison and Savin Perera had resumed Notts’ second innings with the team total on 170-6 and carried their partnership to 62 before the latter was run out for 29 by Adam Barton, attempting a second run.

An Evison boundary posted the 200, but Connor Marshall (12) was caught by Barton at backward square leg off Kiel van Vollenhoven’s bowling soon after.

Jordan Cook (2) was quickly bowled by Hudson-Prentice but last man Jack Blatherwick (11 not out) added useful resistance, helping to take the lead past 350.

Evison (pictured below) played superbly for his 70 before being last man to fall, bowled by Barton, having hit his runs from 126 balls, with seven fours and two maximums. Kiel van Vollenhoven finished with 4-97 off 27 overs. 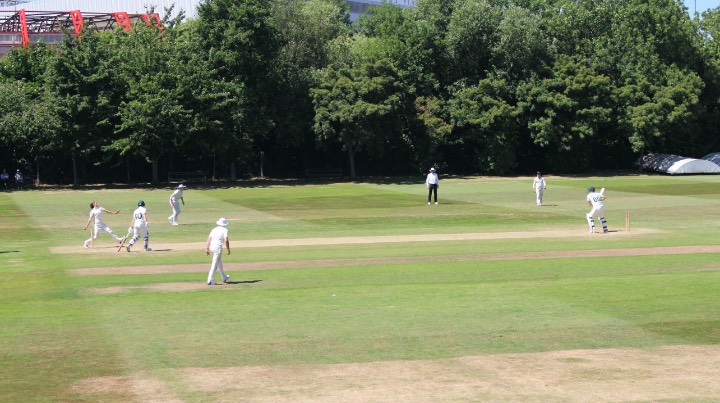 The MCC made a quick start in reply, posting the 50 in 37 balls before Joe Barratt (39) was pinned lbw by Blatherwick.

After lunch, Lyndon James got Billy Mead (28) caught at gully by Chris Gibson, while Eliot Callis (22) was lbw to Ishraj Jandhu and Marc Lezar (4) edged to Paul Coughlin at first slip off the bowling of Evison.

At that point, the hosts were on top, but Ali and Hudson-Prentice then proceeded to put together a fifth-wicket stand of 141 in just 22.3 overs either side of tea.

Hudson-Prentice was particularly proactive and hammered eight fours and one six in a 71-ball 73 before he was out with the score on 270, nicking Lyndon James through to keeper Tom Keast.

There was not let-up as Jakob Bhula joined Ali to add another 50. Ali completed his century from 108 balls (one six, 14 fours) before he was eventually trapped lbw by Chris Gibson for 115.

But, by this point, Bhula was going well and his innings gathered momentum as he finished on 50 not out by hitting a six over square leg to seal his side’s victory, Ben Brookes also ending unbeaten on 19.