FLETCHER: COUGHLIN WILL COME BACK STRONGER

Luke Fletcher can relate to the frustration Nottinghamshire team-mate Paul Coughlin will be feeling as he prepares for shoulder surgery, but believes the all-rounder will come back strongly from his injury setback.

The 25-year-old will have an operation tomorrow (Wednesday) having landed awkwardly on his right side during the England Lions’ final ODI against the West Indies A.

Head Coach Peter Moores has said the former Durham man faces a lengthy road to recovery and will miss a ‘big chunk of the season’.

Fletcher knows all about the disappointment of being sidelined for an indeterminate period after missing the second half of last season when he was struck on the head by a powerful shot from Birmingham Bears’ Sam Hain in a T20 Blast match at Edgbaston.

“We were all devastated when we found out that Coggers was going to be out for a while.” Luke Fletcher

But the seam bowler has now made a full recovery after a winter of rehabilitation and insists Coughlin can do the same, given time.

“We were all devastated when we found out that Coggers was going to be out for a while,” said Fletcher. “A lot of the lads texted him and let him know that we were thinking of him and that if he needed anything then he could give us a shout.

“The difference between him and what happened to me is that he has just made a big move from his home county in Durham, so he’s obviously been really looking forward to getting going and getting started.

“The fact he can’t is obviously disappointing for him because he’s a cracking player who did well for England Lions this winter and everyone was looking forward to seeing what he would have to offer in that first game at Lancs. 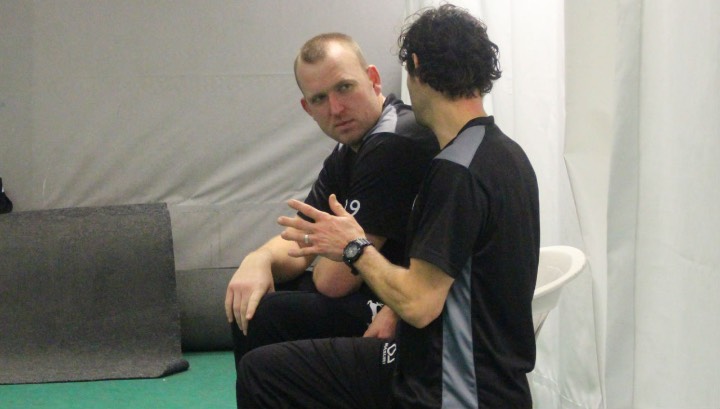 “But we have got a great bunch of lads who will offer their support and Pipey (physio James Pipe) looked after me amazingly well when I was injured, so I’m sure Coggers is going to be in great hands with him.

“What I would say is to take a bit of time off and spend time with his family and friends and not worry about it too much because he’s got a long career left in the game. He just needs to keep his chin up because he will eventually get his first Notts game in.”

James Pattinson batted at number eight for the first half of last season and provided valuable late order runs, weighing in with 197 at an average of 49.25 in five matches.

Fletcher feels Coughlin would have been an ideal fit for that berth with his all-round abilities, but is backing other contenders to fill the berth.

“It’s important that the person who steps up to bat eight and bowl first change is ready to do that.” Luke Fletcher

He said: “Slotting in around number eight and bowling around 85 miles per hour, he would have had a big part to play for us.

“That number eight position has been a bit of a struggle since Paul Franks (now Assistant Head Coach retired), although Jimmy Pattinson stepped in and did a great job last year.

“It’s a shame that won’t be Coggers for a while, but it does give opportunities to other bowlers who can bat to step up and play that role. It’s important that the person who steps up to bat eight and bowl first change is ready to do that.

“If they can do that and do it well in the first game of the season at Old Trafford then it gives them a good chance to book themselves in for regular first-team cricket for the season.”