A knock of 57 from 40 balls from Nottinghamshire’s Steven Mullaney could not prevent the North losing by 63 runs in their opening match against the South in Barbados.

Batting first, the South reached a record-breaking total of 347 at Bridgetown’s famous Kensington Oval thanks in large part to Nick Gubbins’ fine century.

The Middlesex opener hobbled back to the pavilion and was unable to field after suffering badly from cramp late in his innings of 116 from 99 balls.

But the South total, beating the record 328 made at the ground by England against West Indies last March, proved more than enough for them to take a 1-0 lead in the three-match series – watched by director of England cricket Andrew Strauss, and selectors Angus Fraser and Mick Newell, in addition to Paul Collingwood, Andy Flower and Mark Ramprakash who are involved in coaching roles.

That was despite Mullaney’s best attempts to rescue his side when up against it as he top scored for the Northin hitting four fours and two maximums.

Gubbins had received excellent support from Kent’s Daniel Bell-Drummond in an opening stand of 134 inside 19 overs after the North had chosen to field first, and Bermuda-born Sussex all-rounder Delray Rawlins provided the most spectacular batting in making 53 from 41 balls later in the innings – on only his second List A appearance.

Lancashire seamer Saqib Mahmood dragged the North back into the game with a stunning burst of 5-16 late in the South innings – all five clean bowled – as they lost their last six wickets for 32 and were all out with an over to spare. 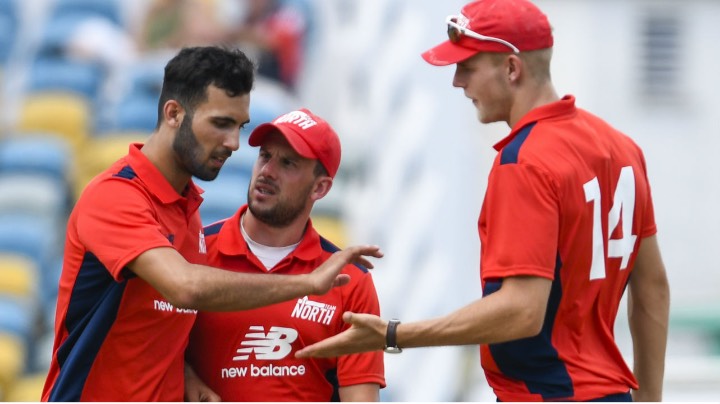 Openers Joe Clarke and Alex Davies then gave the South another scare with an aggressive response of 77 inside 11 overs – although Sam Curran had them both dropped in his first two overs.

But the introduction of spin arrested the North’s momentum, with Ravi Patel winning an lbw decision against Davies before Dom Bess dismissed Clarke and Keaton Jennings in consecutive overs.

Sam Hain maintained the form he showed in the recent Lions series against West Indies A with a stylish 48 but he also fell to Bess, who ended with 3-61.

The North rallied again with a sixth-wicket stand of 89 between Brett D’Oliveira and Mullaney. But immediately after being struck for six by D’Oliveira, Curran applied the coup de grace by yorking the Worcestershire all-rounder – and uprooting Chappell’s off stump with his next ball.

Mullaney then carved the first ball of the next over from Tom Barber to Rawlins at point, and the remaining wickets were shared by Paul Walter and Curran – who ended with 3-51.

The second game of the series is again at the Kensington Oval on Wednesday (1.30pm GMT), when the North need to end their four-match losing run to avoid being condemned to a second consecutive series defeat.