KEEPER MOORES READY FOR 50-OVER CHALLENGE

Tom Moores is determined Notts Outlaws should not relinquish their title of Royal London One-Day Cup champions without a fight.

The Green and Golds start their 2018 50-over campaign against Lancashire Lightning at Emirates Old Trafford tomorrow (2pm start).

It is the first of eight Royal London-One day Cup North Group games, which culminate against Derbyshire at Trent Bridge on Thursday 7 June.

“I think we will be the team to beat in many people’s eyes because of what we did last year.”

“I can’t wait to get started in this form of cricket,” said Moores. “I think we will be the team to beat in many people’s eyes because of what we did last year.

“But we have to be ready for that and I think we will be because the change in format freshens things up, keeping the lads on their toes.

“We have got a lot of experienced players and some exciting and talented younger ones as well.

“I think we would back ourselves in this competition again and now it’s up to us to deliver on that.” 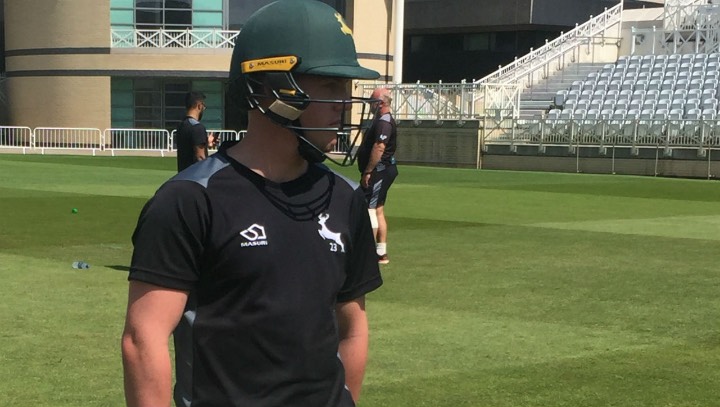 Moores has started the season well in Specsavers County Championship cricket, claiming 22 dismissals so far – more than any other wicketkeeper in the country.

He’s also contributed 195 runs in five matches at an average of 27.85 on pitches that have generally been offering assistance to the bowlers.

The 21-year-old is aiming to keep that level of consistency going into a format where he will play for the county for the first time.

“(In 50-over cricket) you are still playing similar shots, but just look to be a bit more aggressive and find the boundary a bit more.”

Moores said: “From a batting point of view it is not too dissimilar to the four-dayers – it’s just that you up your tempo a little bit.

“You are still playing similar shots, but just look to be a bit more aggressive and find the boundary a bit more.

“I’m looking to carry the momentum from the Championship into the one-dayers. I’m very happy with how I’ve started the season. I feel in good nick and hopefully I can turn some of the starts I’ve had into big scores.”

PreviousMullaney wants flying start in first game as 50-over skipperNextWATCH: Fraine: 'It's What I Have Always Wanted To Do So I Am Thrilled'
TWEETS
Tweets by @TrentBridge
NEXT FIXTURE
Twenty20 International
10 July 2022 at 00:00
Trent Bridge
England
India
LAST RESULT
3 July 2022
New Road
Worcestershire Rapids
Notts Outlaws
Match Report