Welbeck Cricket Club president John Fretwell has declared himself ‘proud’ of the way the club delivered yesterday’s 50-over Royal London match between Notts Outlaws and the Northamptonshire Steelbacks.

A crowd of more than 3,000 flocked to soak up the Sunday sunshine on a glorious day that showed off the picturesque out-ground in all its splendour.

The match itself saw the Outlaws defeated at the north Notts venue for the first time as they were unable to chase down 339-9, finishing on 290 all to lose by 49 runs.

“There’s a great atmosphere when we host games here and I don’t think this weekend’s match was any different.”

But the compliments nevertheless flowed in for the experience put on by Welbeck, who were hosting a Royal London One-Day Cup match for the fourth consecutive year.

“It’s been fantastic,” said Fretwell. “There’s a great atmosphere when we host games here and I don’t think this weekend’s match was any different.

“This is the fourth year we’ve done it and I always love to see all the people here sitting on the grass banks and deck chairs and the youngsters playing on the outfield during the interval and around the edge of the boundary.

“It’s the community and family spirit that I love to see and the weather – it was absolutely beautiful all day – really made it. I’m very proud of the game we put on.” 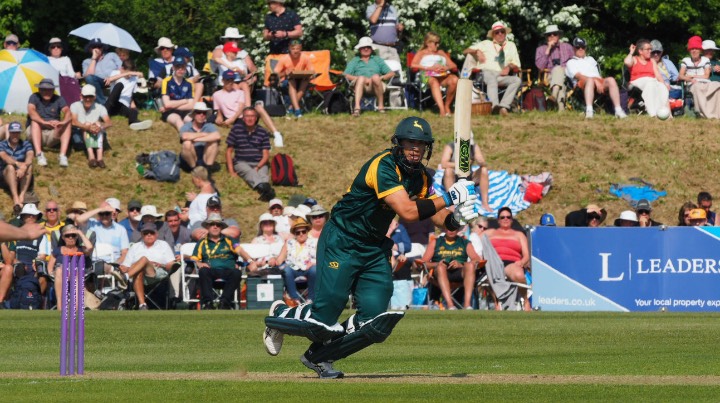 The ground staff at Welbeck have once again been led by Robbie Sprigg, former groundsman at Mansfield Town and an experienced cricketer in the Bassetlaw League.

Fretwell was also full of praise for others at the Club – which moved from Market Warsop to Sookholme in 2006 – who helped make the occasion a success.

He said: “We’re very fortunate here that when we built it the drainage that was put in is first class, which helps with the preparation of the pitch and outfield.

“Robbie and the team do a great job with the ground and there it is a great team effort for everyone.”

“Robbie and the team do a great job with the ground and there is a great team effort from everyone, and they’ve all done a brilliant job once again.

“It is a lot of hard work to host matches, but I’m sure Nottinghamshire appreciate it and it’s always great to have them here.

“A day like this makes it special, so let’s hope we can keep doing it.”