In his younger days he hoped it would be for his home county, but Will Fraine is nevertheless thrilled at the prospect of walking out to play at Emerald Headingley tomorrow.

The Notts Outlaws batsman was born in Huddersfield and grew up playing against the likes of current Tykes Matthew Waite, Matthew Fisher, Josh Shaw and Karl Carver in the junior sides.

But after failing to make the grade for the White Rose County, he never had the honour of playing at the ground graced by greats such as Sir Geoffrey Boycott, Len Hutton, Fred Trueman and Darren Gough.

All that is set to change in Leeds for the fourth Royal London One-Day Cup match of Notts’ campaign, however, with the 21-year-old poised to take to the field as family and friends watch on. It will be a proud moment for all concerned.

“There will be no split loyalties. Some of my friends might want me to play well and Yorkshire to win, but I want a Notts win.”

“If I play in this one I will be ecstatic,” admits Fraine, currently finishing off his studies for a Sport, Exercise and Physical Activity degree at Durham University. “I know a lot of people at Yorkshre still, so it will be nice to catch up with them and have a chat.

“My mum (Sally), dad (Mike) and brother (Tom) will be there – as they have been for the first two games, along with other people I know – and there’s been a few requests for tickets for this one, including my mates who I play with in club cricket.

“But there will be no split loyalties. Some of my friends might want me to play well and Yorkshire to win, but I want a Notts win and for us to keep the wins in this competition coming. It is just another team in opposition for me.

“Because I was let go by them, you obviously want to try to show them what they are missing and that they should have kept you on. It would be a great time to get a first 50 for Notts – and very special if I did – but I’d be just as pleased if I don’t have to do much and the Outlaws win.”

After Fraine’s whirlwind introduction to first team cricket – signing a contract the day before making his debut against Lancashire at Emirates Old Trafford – he is beginning to settle into the dressing room banter at Trent Bridge. 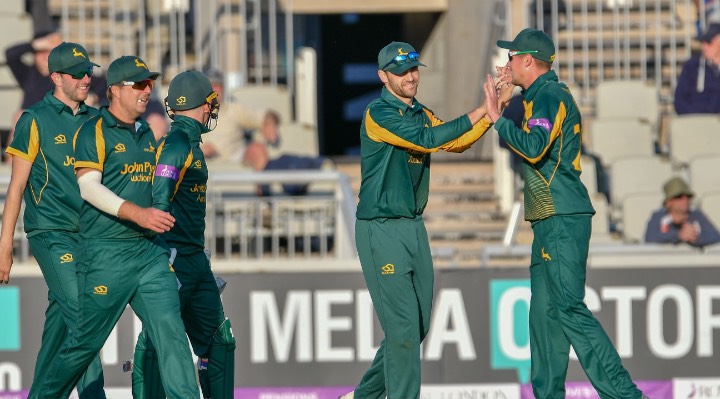 Even so, he still has to pinch himself at times, having been around the houses at the likes of Worcestershire, Leicestershire and Durham MCCU before getting his chance.

Fraine says: “I’ve worked very hard to get where I am and it’s been like a dream I wouldn’t achieve at some points, so to have that first team shirt with my name on to put in the wash is amazing. Getting that shirt was one of the best moments of my life.

“It’s a big leap up from Seconds cricket, but I’m enjoying it and I’ve been made to feel very welcome by all the experienced players, even though I’ve only just come in, and they don’t mind me asking questions as the new boy.

“Everyone backs you to do well, which is very reassuring, even if you are still nervous.”

“It’s a big leap up from Seconds cricket, but I’m enjoying it and I’ve been made to feel very welcome.”

Those nerves were particularly jangling on Fraine’s debut, when he was the man under a skier offered by Dane Vilas at an important point of the match.

It was a moment he was visibly relieved to overcome, with television pictures showing him thump his chest, to explain how hard his heart had been beating, after taking the catch.

“I had taken about 150 catches on the boundary from Ant Botha and Paul Franks in practice before the game, so I didn’t want to mess this one up,” recalls Fraine.

“I could just about hear my heart beating and the ball seemed to be in the air for an age, but thankfully I took it and I think people could see my relief. Even making a small contribution on debut helps you settle in and hopefully I can add some more runs as the tournament goes on.”