Tom Moores is ready to embrace doing battle alongside unfamiliar friends, against very familiar foes, as he prepares for his overseas T20 debut.

Moores doesn’t yet know which part of Pakistan he’ll be representing when the T20 Super League gets underway on 14 February.

A replacement brand for the Multan Sultans, who will not take part in 2019, has yet to be defined.

However, with the draft complete, he knows he’ll have the likes of Steven Smith, Shahid Afridi and Dan Christian in his corner.

The Outlaws gloveman is also aware that he’s highly likely to come up against his Nottinghamshire teammates, Samit Patel and Harry Gurney, who were snapped up by Islamabad United and Quetta Gladiators respectively.

“I’ll try my best against them, but they’re very good as everyone knows,” he said.

“It will be great fun - a great challenge and a great, friendly rivalry with bragging rights at stake.

The Pakistan Super League will provide Moores with his first taste of T20 action abroad.

He’s thrilled with the recognition and the opportunity the tournament provides.

“I’m over the moon to be picked up. It’s a nice reward for a lot of hard work.

“Playing in these tournaments, with and against the best players in the world, it stretches your game.

“The PSL is a huge competition. Playing in it will make be a better player, so I can’t wait to get going.

“I’ve watched T20 cricket growing up and one of the dreams is to get into those tournaments.

“To do well once you get into them, that’s the most important thing. 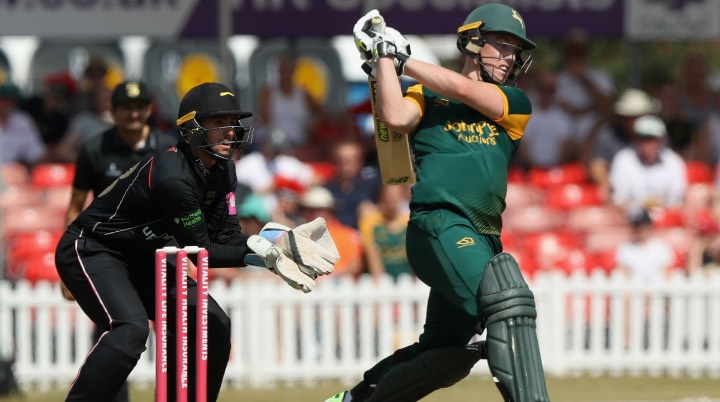 “I feel my game suits the format really well. I try to strike the ball and play a really aggressive brand of cricket, although alongside that I also want to go as far as I can in the longer formats.”

With Steven Smith, Shahid Afridi and Shoaib Malik among Moores’ new teammates, the 22-year-old will be keeping illustrious company.

“There are some very big players who I can’t wait to train alongside and learn from,” he said.

“Playing with the likes of Steve Smith and Shoaib Malik and being able to pick their brains - you can’t buy that kind of experience.”

Meanwhile, the presence of Outlaws T20 captain Dan Christian may be more familiar, but it’s no less inspiring according to Moores.

“I’ve got a great relationship with DC. Being under him as a captain at Notts has been great for me. He’s helped my game immensely.

“He’s a player that’s much further down the line than I am. But he’s someone who – like me – likes to play a very hard-hitting, aggressive game of cricket.

“He knows my game, he knows my goals and he’s been there and done it. It will be great to play alongside him again.”

Register your interest here to be first to hear about our T20 Vitality Blast Season Ticket.

Outlaws Put To The Test As Winter Training Begins

On This Day In 1904, Harold Larwood MBE Was Born