FROM SKIPPER TO SCHOOLMASTER: MULLANEY IN LOCKDOWN

In part two of a look at his life in lockdown, Nottinghamshire captain Steven Mullaney takes trentbridge.co.uk through the unique challenges of an extended period at home.

Read part one of Mullaney's life in lockdown here.

As lockdown has progressed, each of us has had to adapt to new roles and responsibilities.

For Steven Mullaney, that has meant making the leap from skipper to schoolmaster.

And even as an individual used to leading dozens of elite sportsmen through the travails of a season, the challenge of teaching his seven-year-old daughter has been considerable.

“I’m not going to be a schoolteacher after cricket, that’s for sure!” he jokes.

“Scarlet, my eldest, is nearly eight so it’s quite important that she does her schoolwork.

“The younger one is still at pre-school, so she’s got little things to do but I think the older one finds it hard that she has to do some work while her sister is watching videos and reading her favourite books.

“We’re doing quite a lot of maths with Scarlet, and I was alright at that so that’s going okay. The way I get to an answer is different to the way they’re trying to teach though, so that can be difficult to work out.

“But when it comes to English, I have to google most of it to be honest. Adverbs, adjectives, adverse adjectives… some of it is quite hard!”

As thousands of teachers up and down the country will know, educating the next generation is only part of the job.

The battle to impose discipline is one which rages inside every school building – and the Notts skipper admits the transition from ‘dad’ to ‘Mr Mullaney’ is tough to navigate.

“It’s impossible to switch into teacher mode,” he conceded.

“They don’t listen to you as much as they would their teachers because they know they can get away with more.

“You just have to improvise, make it as fun as you can and make the best of it.

“Scarlet’s school have been really good – they’ve phoned up to see how things are going, they’ve been sending work across through an app – so you’ve just got to do things as well as you can.”

A notable feature of domestic life during the past few weeks is how so many households have turned to the same jobs to alleviate the boredom.

Never before have the nation’s garden fences looked so pristine, or cake tins been so well-used.

Mullaney is no different. 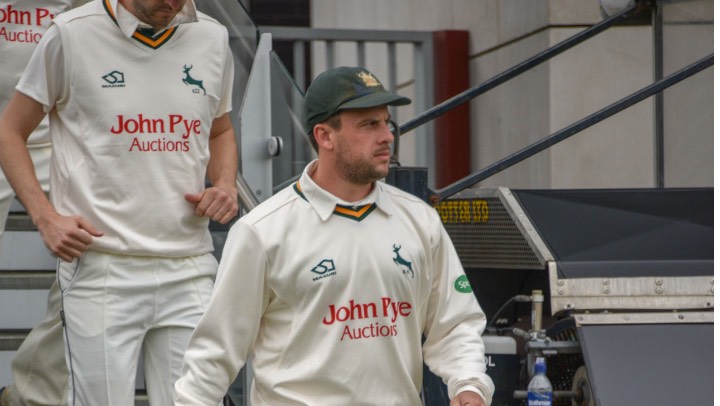 “I’ve done about ten fence panels in three weeks, and I’m actually going to do some proper labouring in my garden,” he says.

“I want to try and dig out and extend the patio area. I’ve done a bit of labouring before when I’ve been over in Australia, but nothing like this before.

“No doubt I’ll do it wrong and have to get someone in to fix it sometime, but I’ve got a few mates who do that kind of thing for a job, so I know if it goes wrong I can get out of it pretty simply.

“I’ve stayed away from baking for now though. The problem is if I bake then I’ll eat it and I’ll get fat.

“Give it another few weeks and I might start though!”

Mullaney is sporting a notably sharp haircut as he talks us through his lockdown routines.

With barbers closed, the regular trim has become a family affair.

“I’ve had one at-home haircut so far – the missus did a bit of a shave,” he says.

“I was a little bit nervous, but I she’s done alright.

“I might have to go for the ‘Fletch’ next though – just get rid of it all, go for a number one all over.”

It’s an arresting image on which to close our conversation.