Trent Rockets’ inaugural season at Trent Bridge will begin with the visit of Southern Brave – one of four double-headed The Hundred matchdays that are set to take place at the height of summer.

The fixture takes place on the opening weekend of English cricket’s newest competition, with the womens’ game at 11am being followed by a men’s clash at 2.30pm. 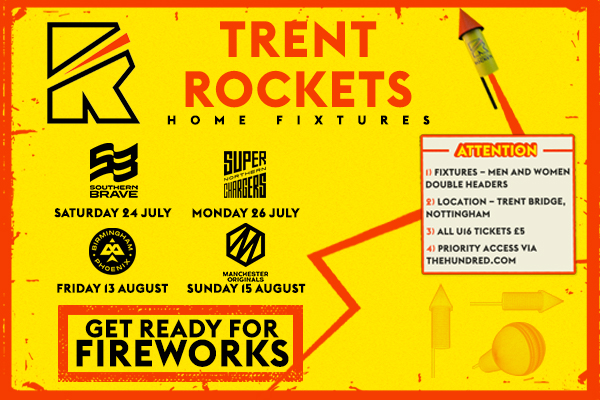 The world’s leading T20I batsman, Dawid Malan, and bowler, Rashid Khan, have already been confirmed as part of Trent Rockets’ men’s side this summer.

The duo will join a host of international and domestic stars, including Outlaws Alex Hales, Steven Mullaney, Tom Moores and Matt Carter.

Further players will be confirmed for both sides today, as The Hundred Draft takes place.

PreviousPATEL AND VAN DER GUGTEN SIGNED BY TRENT ROCKETS Next'HE'S GOT IT AWAY!': BORN ON THIS DAY, EDDIE HEMMINGS
TWEETS
Tweets by @TrentBridge
NEXT FIXTURE
County Championship
20 May 2021 at 11:00
Trent Bridge
Nottinghamshire
Worcestershire