Start times have been confirmed for this summer’s Vitality Blast fixtures at Trent Bridge, with Notts Outlaws seeking to defend the crown they earned in 2020.

The Outlaws won all six group-stage games at their historic home on the way to a fourth Finals Day appearance in five years last summer, before lifting the trophy at Edgbaston following a six-wicket victory over Surrey.

Two of the Outlaws’ seven home games in 2021, versus Birmingham Bears on Friday 11 June and Derbyshire Falcons on Friday 18 June, will be played before reduced crowds due to ongoing measures to restrict the spread of Covid-19. Tickets are now sold out for the clashes, which will get underway at 6.30pm and 6pm respectively.

Following a key date in the government’s roadmap out of lockdown on Monday 21 June, the Outlaws will welcome Worcestershire Rapids a day later, also with a 6pm start.

A double-header on Saturday 26 June will see the East Midlands outfit, Lightning, face South East Stars in the women’s T20 competition with an 11am start, followed by Notts Outlaws versus Lancashire Lightning at 3pm.

Notts will continue their North Group games at Trent Bridge with fixtures against Leicestershire Foxes on Thursday 1 July and Yorkshire Vikings on Friday 9 July, both starting at 6.30pm.

The Outlaws’ North Group campaign will then be wrapped up against Durham on Sunday 18 July starting at 4pm, albeit this will be switched to 6.30pm if selected for Sky coverage.

A full list of the Outlaws’ home fixtures during the 2021 Vitality Blast is presented below. 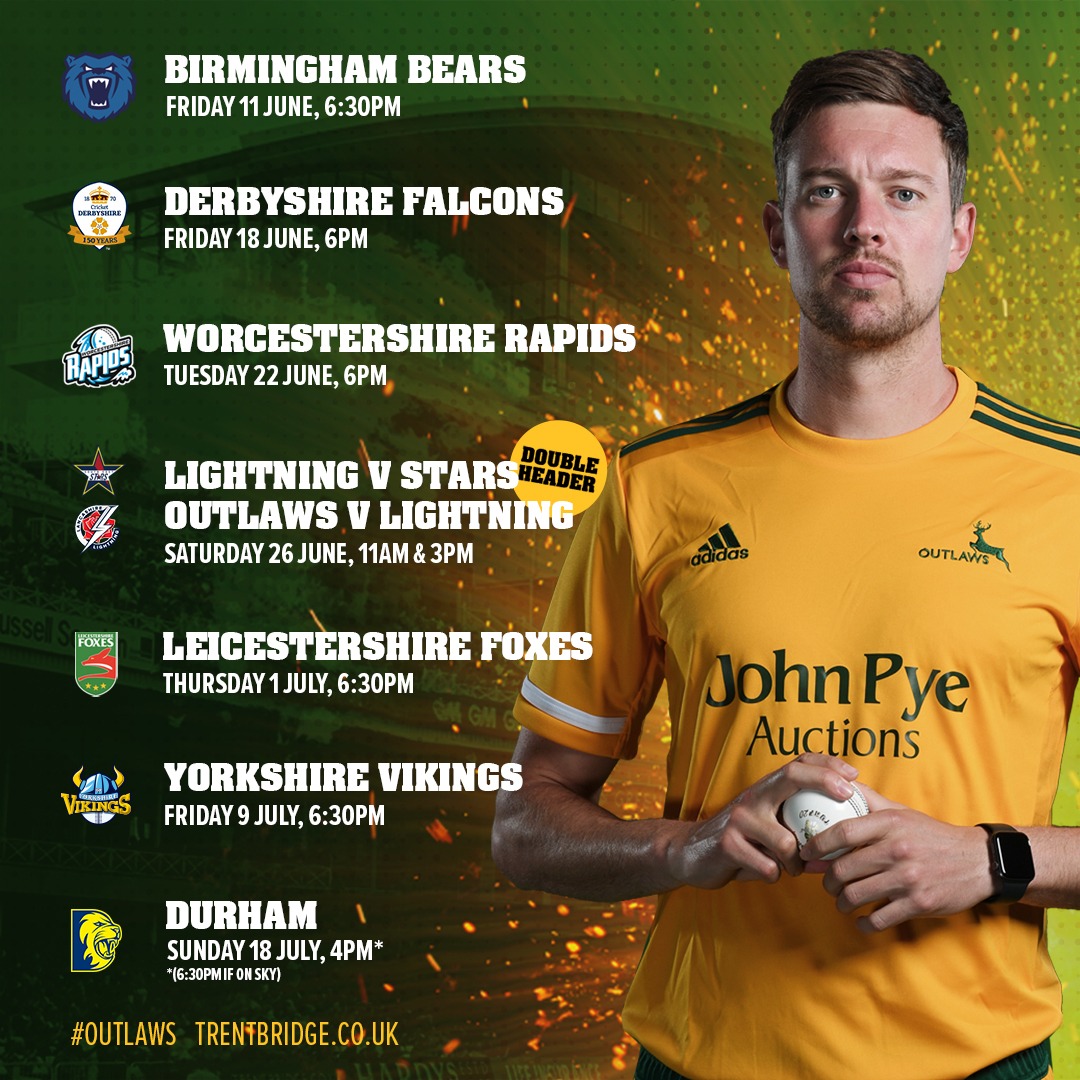 Tickets to witness the Notts Outlaws’ defence of their Vitality Blast crown can be purchased online at tickets.trentbridge.co.uk.

Arrangements for matches after the government’s signpost date of 21 June will be communicated once clarity on regulations moving forward has been obtained.

Outlaws supporters who are hoping to travel to away fixtures are advised to contact the host county in advance as approaches around the country do vary and may be subject to change.

Tickets to witness the Notts Outlaws’ defence of their Vitality Blast crown can be purchased online at tickets.trentbridge.co.uk.