COUNTY CHAMPIONSHIP FINAL WEEK: ALL YOU NEED TO KNOW

So, it all comes down to this.

14 teams, 13 rounds of County Championship action and four teams all in with a chance of being crowned the best red-ball side of 2021.

Nottinghamshire go into the 14th and final round of games in fourth place on 52 points, 6.5 behind Hampshire in first.

The Green and Golds welcome Yorkshire to Trent Bridge from Tuesday, with Hampshire travelling to Lancashire and Warwickshire hosting Somerset. 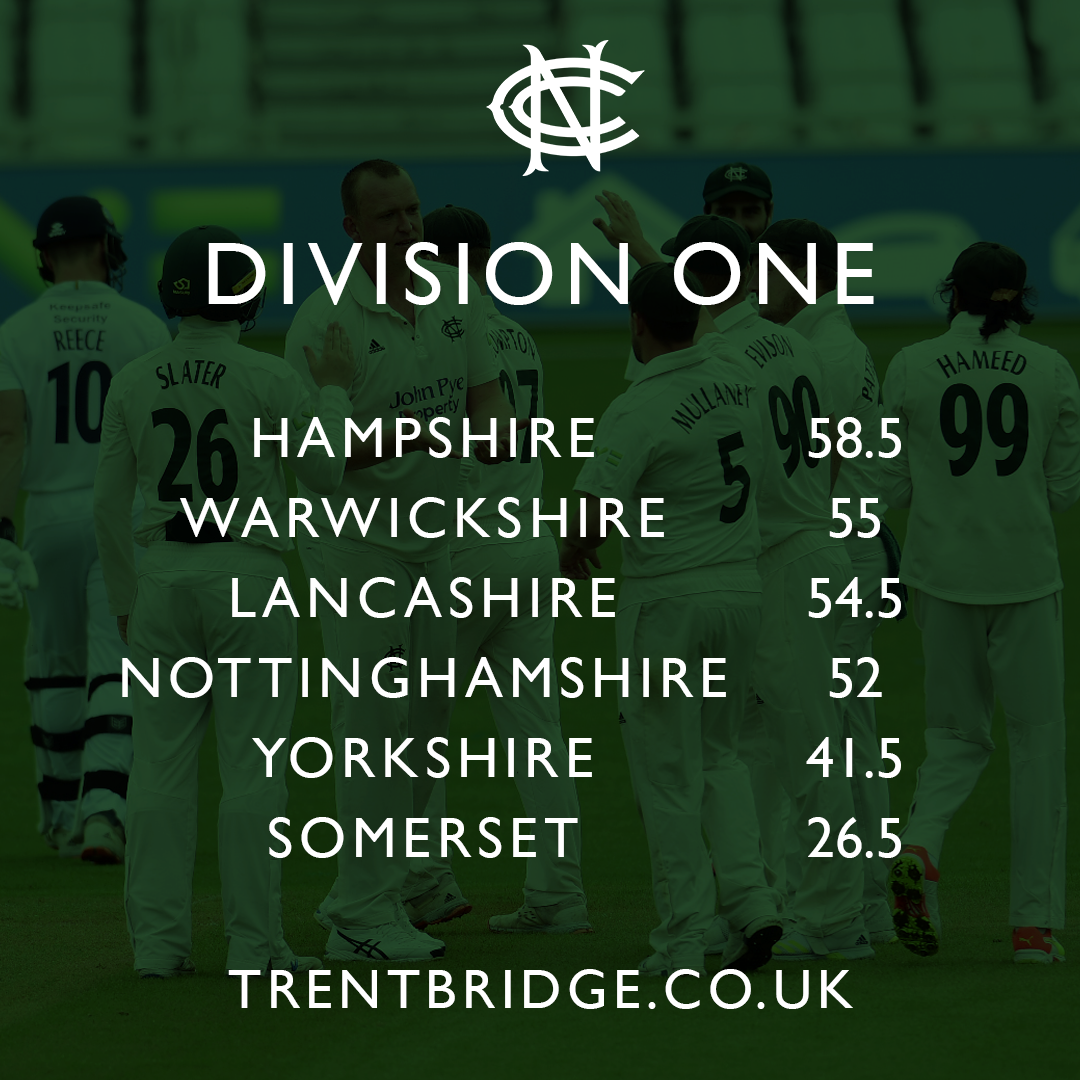 After back-to-back victories versus Somerset and Lancashire, followed by defeat at Hampshire, for Notts the focus is on winning their match, whilst also partaking in a bonus point battle and hoping other results go their way.

A maximum of 24 points are available for a victory in the County Championship, with three bowling (three, six and nine wickets) and five batting bonus points (200, 250, 300, 350 and 400) in play during the first 110 overs of each team’s first innings.

Should Notts win with a maximum haul, the Green and Golds will set a target of 76 points to beat for the other three sides.

With Hampshire and Lancashire going into the final round of matches ahead of Notts in terms of points, both teams go into their encounter knowing victory will likely take the trophy their way.

If Hampshire were to win at Aigburth, Nottinghamshire would have to beat Yorkshire and outscore The Ageas Bowl outfit by seven in the bonus point tally after the first innings.

If Lancashire claim the spoils at home, the Green and Golds would have to beat Yorkshire and outscore the Red Rose by three in the bonus point tally.

The optimum result between Lancashire and Hampshire from a Nottinghamshire perspective is, therefore, of course a draw.

Whatever happens in Aigburth, Notts support in the Warwickshire versus Somerset fixture will very much be in the camp of the Cidermen.

If Somerset win, Warwickshire can’t win the title, but if the Bears triumph, Peter Moores’ men will need to outscore them by four in the bonus points tally and take victory versus the White Rose.

Should the Green and Golds outscore the Bears by just three, it would leave Nottinghamshire and Warwickshire on the same amount of points.

Having each then ended the divisional stages with three wins and one loss, the title would be heading to Edgbaston courtesy of the most points in the head-to-head between the sides.

The team that finishes second in the table will qualify, alongside the county champions, for the Bob Willis Trophy Final; a five day fixture which commences at Lord’s on Tuesday 28 September.

One thing is for certain, the destination of the 2021 County Championship title is going down to the wire, creating a permutation-filled final round of fixtures to enjoy.

Nottinghamshire membership for the 2022 season is on sale now, with those who join our club bestowed priority access to tickets for Trent Bridge’s international summer alongside a plethora of additional perks.