With the Bears back in Nottingham on Friday 17 June, trentbridge.co.uk takes a look at some of the standout statistics from a classic Blast contest. 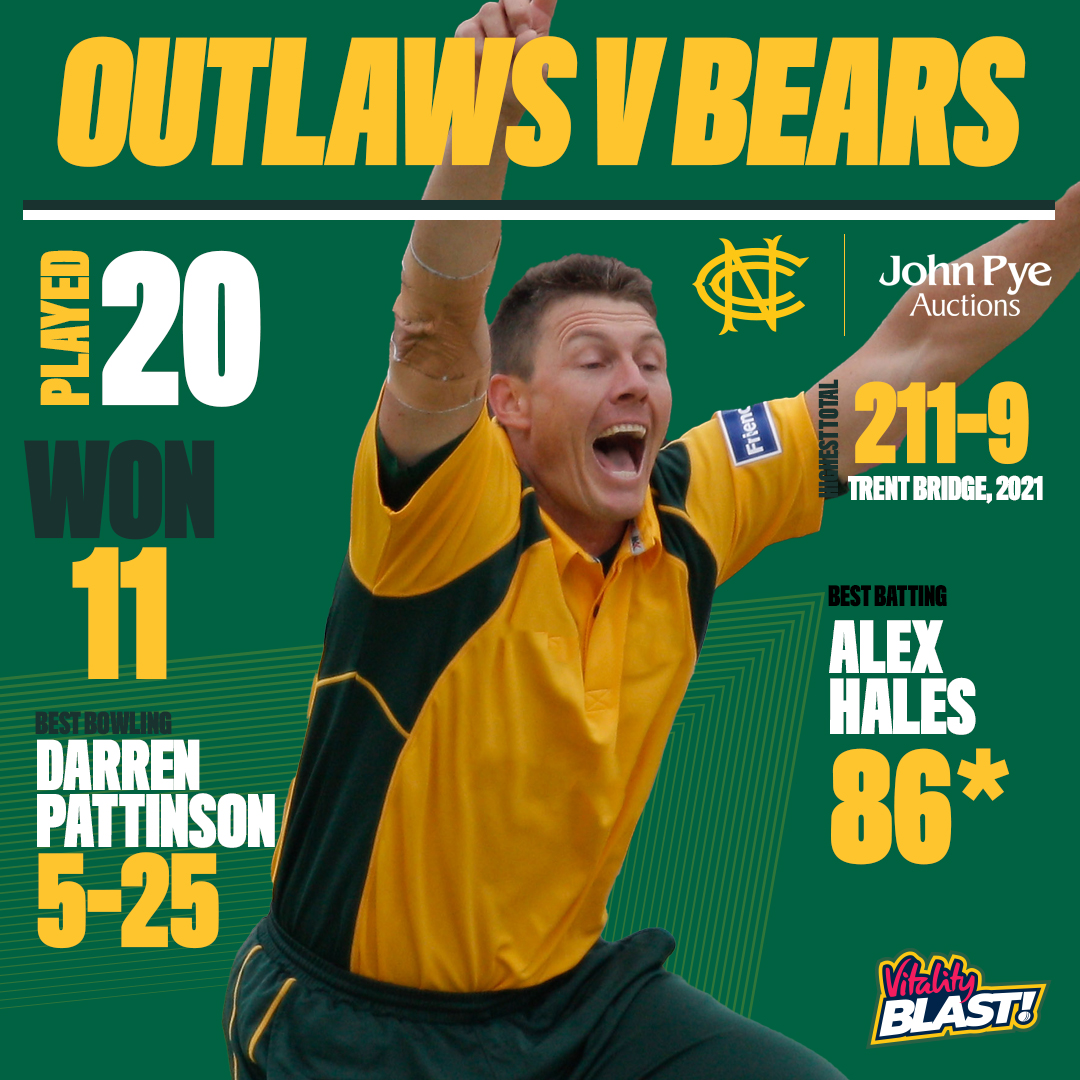 As is the case in the overwhelming majority of Notts' inter-county rivalries, the Outlaws hold the upper hand over the Bears in T20 cricket.

Those eleven wins include one by a record margin: 114 runs, no less, as the hosts were put to the sword at Edgbaston last summer.

A total of 177/9, led by sparkling turns from Samit Patel and Ben Duckett, proved more than enough as Jake Ball (4/11) and Calvin Harrison (4/17) turned in inspired performances with the ball.

His younger brother James may now be an all-format mainstay for Notts, but Darren Pattinson's influence at Trent Bridge is far from forgotten.

A title-winner and a bowler of unerring accuracy, Pattinson Sr's career-best T20 bowling performance came against the Bears in 2011.

Jim Troughton's stumps were spreadeagled, Keith Barker holed out to Adam Voges, and a lower middle-order of Ant Botha, Tim Ambrose and Steffan Piolet all perished as Pattinson constructed what remain the second-best bowling figures for any Notts bowler in T20 cricket.

Mere numbers, and words, simply cannot do justice to the destruction wreaked by Hales in 2015 against the Bears at Trent Bridge.

It was a performance that more than stands the test of time. Relive it here...

Of course, no rivalry is entirely a one-way street.

As supporters were finally welcomed back into Trent Bridge for Vitality Blast cricket, those in the stands were soon diving for cover in a spectacular display of boundary-hitting.

First, Birmingham Bears amassed 229/5, the highest score by any visitors to Trent Bridge, before the defending champions endured a sticky start to the run chase.

Quickfire runs from Ben Duckett and Tom Moores ensured the Outlaws remained in the hunt, but ultimately fell short on an evening which saw 440 runs scored and 14 wickets taken.

On their home turf for the 2017 T20 showpiece, the Bears were outclassed by a double-chasing Outlaws side in an enviable purple patch.

Brendan Taylor and Samit Patel hit half-centuries, before late impetus from Dan Christian took Notts to 190/4 from their 20 overs.

In reply, Harry Gurney's dismissal of Dom Sibley and Samit Patel's pinpoint run-out of Ed Pollock set the tone for a dominant performance in the field, with Gurney taking four wickets as the Outlaws lifted T20 silverware for the first time.