INDIA ON THE VERGE OF COMPLETING EMPHATIC VICTORY DESPITE BUTTLER CENTURY

India are on the verge of completing an emphatic victory at Trent Bridge, and keeping the series alive, despite the best efforts of Ben Stokes and Jos Buttler, with the latter striking his maiden Test century.

The Indian seamers were on fine form throughout the day, but it was an inspired Jasprit Bumrah spell, in which he removed Buttler, Jonny Bairstow and Chris Woakes inside two over, that eventually broke England’s resolve. 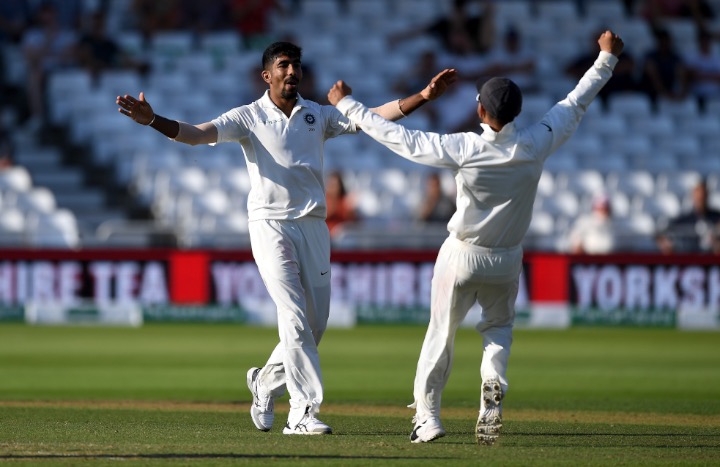 Buttler meanwhile went to a maiden Test century with a boundary off Mohammed Shami, from 152 balls, but was unable to reach the close, his dismissal sparking the collapse which has left India on the brink.

After dealing with a tricky nine over session on the third evening, England would have been hoping that their openers could further frustrate the Indian bowlers on the fourth morning.

However, Ishant Sharma had other ideas, having Keaton Jennings (13) and Alastair Cook (17) caught behind the wicket in his first two overs of the day.

Joe Root was the third victim, caught in the slips by Rahul off Bumrah for 13, before a brilliant catch from Virat Kohli removed Ollie Pope for 16 off a ball from Shami.

At 62-4, Buttler and Stokes came together and thwarted the fired up Indian quartet of fast bowlers, adding 179 for fifth wicket.

In that time, Buttler, who has been England’s best batsmen across the summer in Test cricket so far, completed a maiden century much to the delight of the Trent Bridge crowd. 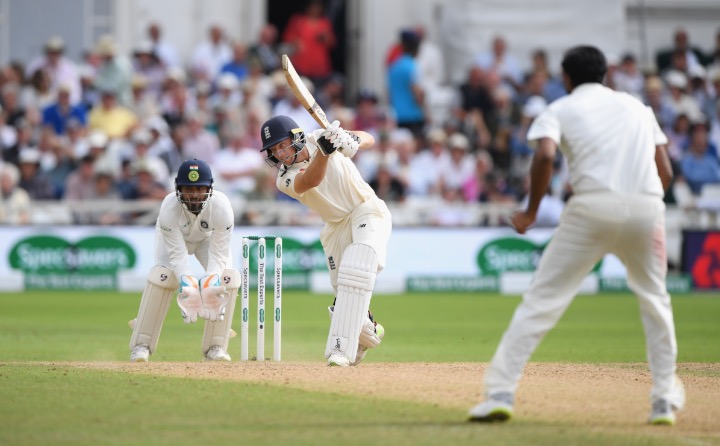 However, after adding a further six to his score, he was trapped in front by Bumrah not playing a shot, a review unable to save the England batsman.

With 106 to his name and over four and a half hours at the crease, Buttler left the field to a standing ovation from the 7,644 in attendance at Trent Bridge.

Bairstow, batting with a broken middle finger on his left hand, was bowled first ball and despite Chris Woakes surviving the hat-trick delivery, Bumrah had his man the very next over with a rasping bouncer.

India’s first innings hero with the ball, Hardik Pandya, then got in on the action, ending the valiant effort of Stokes on 62, after the England all-rounder had spent 187 balls at the crease.

Bumrah thought he had his second five-wicket haul when Adil Rashid was caught in the slips, only for the England spinner to be called back after replay showed it was a no-ball.

Rashid briefly enjoyed his reprieve as he and Stuart Broad scored quickly against the Indian attack in a partnership of 50 for the ninth wicket.

Nottinghamshire all-rounder Stuart Broad passed 3,000 runs during his innings, becoming only the fifth player in Test matches to reach that landmark and take 400 wickets.

However, Bumrah returned with six overs to go in the day to complete his five-wicket haul, Broad caught in the slips for an entertaining 20.

Rashid and James Anderson then managed to negotiate the final half an hour of play, leaving India one wicket short of taking the series to 2-1 with two matches left.

Buttler: 'We Had A Bad Day'

Kohli Century Gives England Mountain To Climb To Save Test