OUTLAWS V VIKINGS THROUGH THE YEARS

Notts Outlaws take on the Yorkshire Vikings in the final home group game of the T20 Blast campaign on Friday and in honour of the 27th meeting of the two, we've had a look back at the games from years gone by.

In the first meeting between the sides in 2003, the White Rose ran out winners by 18 runs at Headingley. Fifties from Matt Wood and future Outlaw Michael Lumb, who also took three wickets, saw Notts fail to chase down a target of 197. Kevin Pietersen made 44 for the Outlaws but a young Tim Bresnan also took three wickets to bowl Notts out for 178.

The first meeting at Trent Bridge the following year was a high scoring encounter. An unbeaten 96 from Matt Wood, the highest score by a Yorkshire batsman against Notts, was in vain as the Outlaws were victorious by three wickets. The visitors posted a total of 207 but the Green and Golds chased it down with a ball to spare thanks to a knock of 91 from Mark Ealham. 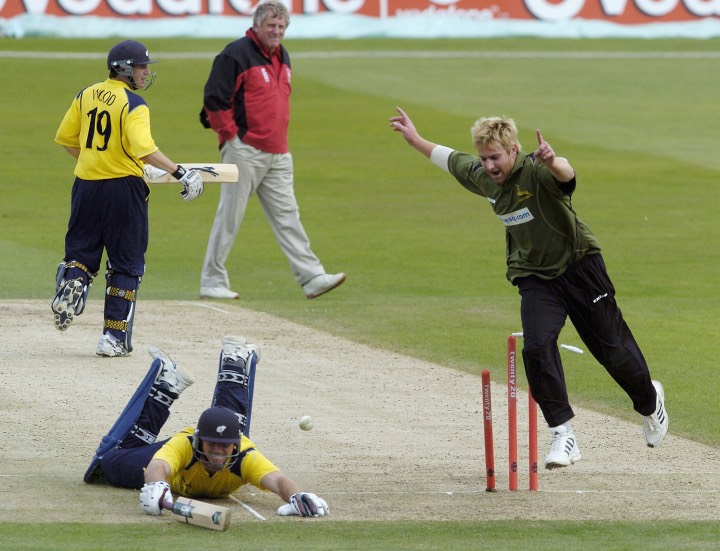 Richard Logan runs out Michael Lumb in the 2004 fixture.

Both teams picked up a win each in 2005 as Will Smith (55) and Graeme Swann (62) claimed half centuries in their opening stand of 101 in the Outlaws victory at Headingley following Yorkshire's win at Trent Bridge.

But the subsequent year saw the Green and Golds complete the double over the Vikings for the first time. The victory at Trent Bridge saw an impressive batting display from David Hussey, who's 58 set up a 21-run win, before Stephen Fleming's 60 saw Notts chase down 159 to seal a seven-wicket triumph at Headingley. 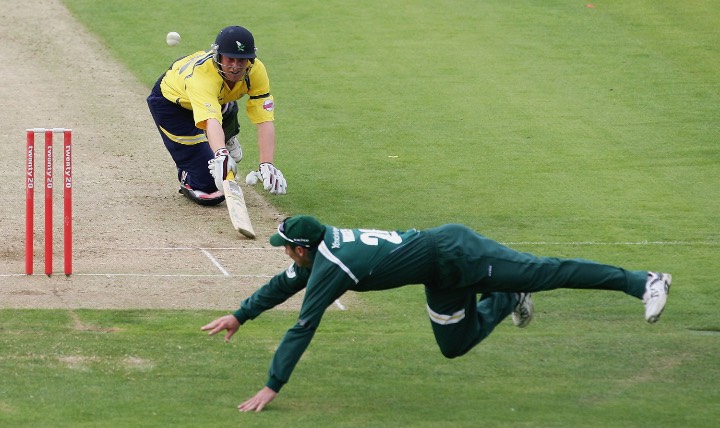 Australian Darren Hussey tries to run out Andrew Gale in 2006.

The sides again traded wins in the next two years, with Notts defending a total of 149 at Trent Bridge in 2007 thanks to a disciplined bowling display. 2008 saw a convincing win for Yorkshire in Nottingham after a four-wicket haul from Adil Rashid saw Notts bowled out for 136. A fifty from Gerard Brophy in an opening stand of 99 with Andrew Gale (45) saw the White Rose pick up a nine-wicket victory. 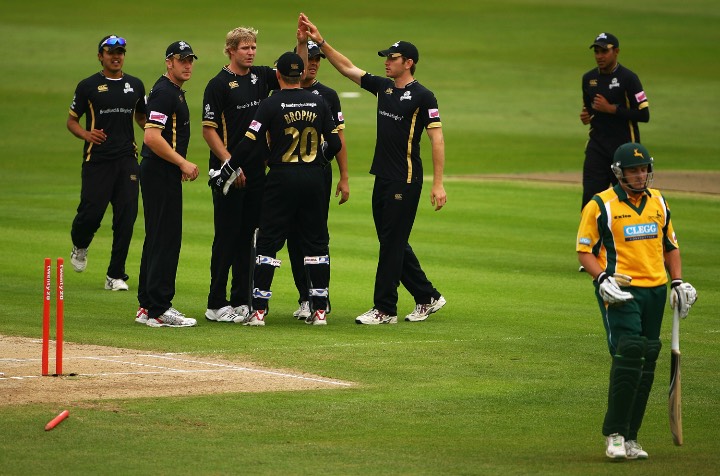 Matthew Hoggard celebrates the wicket of Matt Wood in 2008.

An unbeaten 82 from Australian Adam Voges was in vain in 2009 as Andrew Gale’s 91 took Yorkshire to an eight-wicket victory at Headingley. The White Rose opener also made runs in the return leg at Trent Bridge with a knock of 76 but this time the Outlaws came out on top by 11 runs. The teams also took two points from each other in 2010. 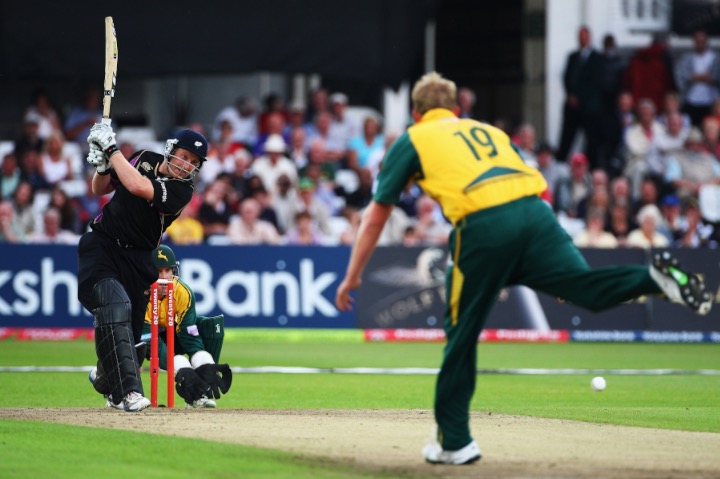 Another double for the Green and Golds came in 2011. A dominant display at home saw Notts post 215 after 74 from Voges and a half century from Samit Patel before restricting the Vikings to just 162-8 in reply. Patel, Darren Pattinson, Ben Phillips and Andy Carter all took two wickets each in the 53-run triumph with the Outlaws also claiming a six-wicket win at Headingley. 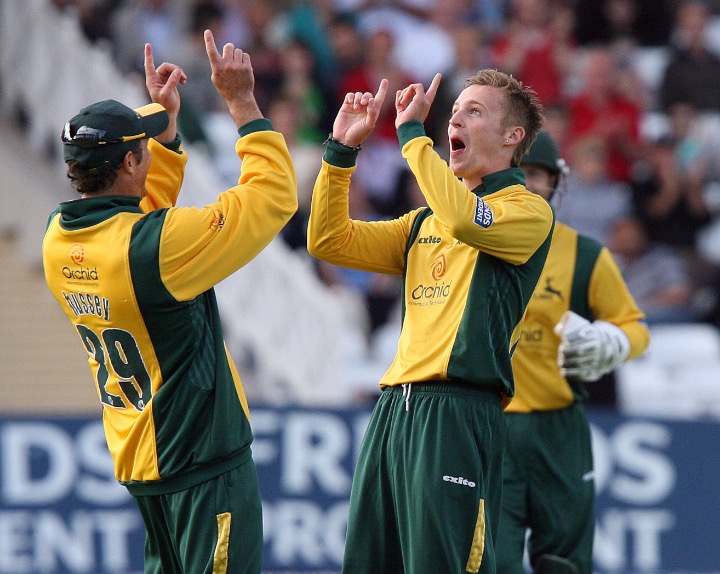 Graeme White celebrates the wicket of Herschelle Gibbs back in 2010.

The rain prevented the fixture from taking place at Scarborough in 2012, whilst Yorkshire took the win in the return fixture at Trent Bridge. Adam Voges enjoyed his encounters with the Vikings as he again top scored for Notts with 70 but a total of 148 wasn’t enough as the White Rose chased it down with 14 balls to spare. 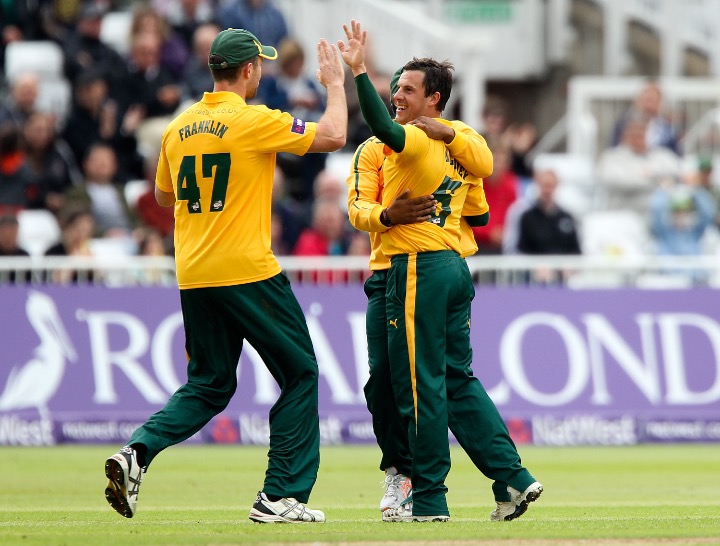 Steven Mullaney celebrates with James Franklin and Samit Patel as Notts do the double in 2014.

Notts were victorious in the next four games in 2013 and 2014 as the Outlaws enjoyed the rub of the green over their northern counterparts before Yorkshire completed their first double in 2015. After securing a six-wicket win at Trent Bridge, Glenn Maxwell’s unbeaten 92 and Andrew Hodd’s 70 saw the Vikings post 209 at Headingley. Despite an unbeaten, career best T20 knock of 90 from Samit Patel, the Outlaws fell 40 runs short handing the White Rose all four points. 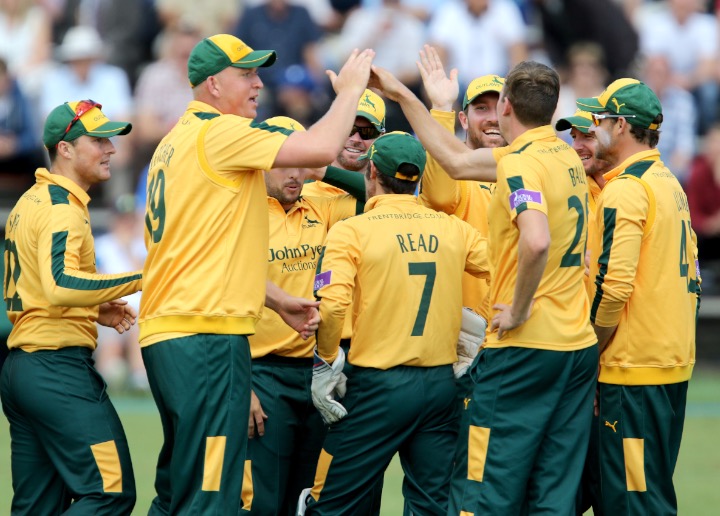 The Outlaws celebrate in 2016.

Harry Gurney’s 3-16 saw the Outlaws exact an element of revenge in 2016 as they were victorious by three wickets in 2016 in the only game played in that campaign. 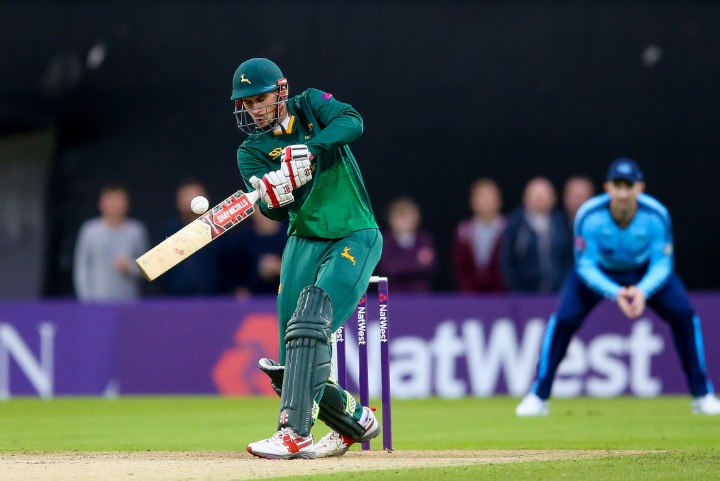 Alex Hales hit his first Outlaws century against the Vikings in 2017.

With Alex Hales’ maiden Notts T20 century and a record Trent Bridge run chase making sure the sides traded wins again last year, this year’s fixtures are again shaping up to be pivotal as both teams look to make a claim for the knockout stages.