Alex Hales has signed an extended contract with Notts to keep him at Trent Bridge until the end of the 2019 season – but he will not play red ball cricket.

The 29-year-old right hander was a major contributor to the Club’s white ball trophy successes last summer when the Outlaws completed a Royal London One-Day Cup and T20 Blast double.

Hales smashed 434 runs in the 50-over competition at 72.33, including a Lord’s one-day final best 187 not out to help lift the title with victory over Surrey.

“We are looking forward to Alex being involved again with us for the next two years.” Director of Cricket Mick Newell

The powerful hitter added another 507 runs at 33.80 in 20-over cricket, sharing a world record power-play partnership with Riki Wessels of 106 against Durham, before Notts went on to win Finals Day at Edgbaston.

“We are looking forward to Alex being involved again with us for the next two years as he was integral to our success in 50 and 20-over cricket last summer,” said Director of Cricket Mick Newell.

“Alex is entitled to make himself available for whatever format he wants to play, and we respect his decision. He’s an outstanding white ball player and we look forward to him helping us win more trophies in that format of the game.”

Hales has been part of the England squad playing in a tri-series T20 tournament against Australia and New Zealand over the past few weeks. 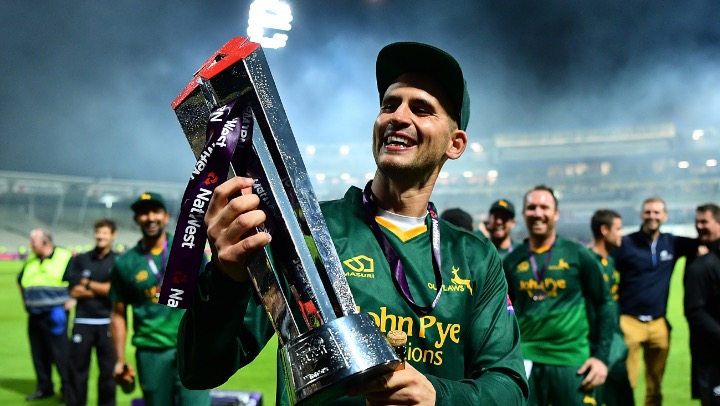 He was also part of the team to clinch a 4-1 One-Day International series victory against the Australians in January.

“It was a fantastic year for the Notts Outlaws last year and I believe we can have more success in the future.” Alex Hales

Hillingdon-born Hales, who wears the number 10 shirt for the Outlaws, said: “I’m grateful to the Club for extending my deal with them because I love batting at Trent Bridge – it’s my favourite place to play.

“For the next 18 months I’m excited to focus entirely on limited overs cricket and want to be part of a Notts Outlaws team that retains the white ball double. It was a fantastic year for the Club last year, and I believe we can have more success in the future with the players we have at our disposal. I'm also hoping to be part of a World Cup-winning squad with England.

“The decision to focus on my white ball game wasn't taken lightly or on the spur of the moment, it's one I've thought long and hard about. It's also one I've discussed at length with the Notts management. I'd like to thank them for their continued support.”