Left-arm seamers Luke Wood and Mark Footitt pushed their claims for first-team returns in spectacular fashion with devastating spells of bowling for Nottinghamshire's Second XI that reduced opponents Worcestershire to 33-7 at Stourbridge.

After being put in to bat, opener Chris Gibson scored a composed 132 for the visitors, who were bowled out after tea for 345 in 82.4 overs.

But the biggest drama on the first day of the three-day encounter was yet to come as Wood – in his first spell back bowling following an ankle problem – took 4-5 in the space of 19 balls and finished with figures of 4-14, as the hosts slumped to 7-4.

Footitt – forced to return early from a recent loan spell at Derbyshire due to injury – then got in on the act, claiming three more quick wickets to end with 3-2.

Both men will hope their performances have caught the eye of the Notts management, who will name the squad for their weekend Specsavers County Championship match at Somerset on Thursday.

Trialist Brent Williams (34) shared a stand of 57 with Gibson until his stumps were disturbed by Ben Twohig and replacement Wood (44) added another 82 for the fourth wicket before becoming the fourth Notts batsman to be bowled, this time by Tristan Blackledge.

Tim Wyatt came to the crease joined Gibson, who went on to complete his hundred from 198 balls, with eight fours, thanks to a two in the 62nd over, moving the score on to 228-4. 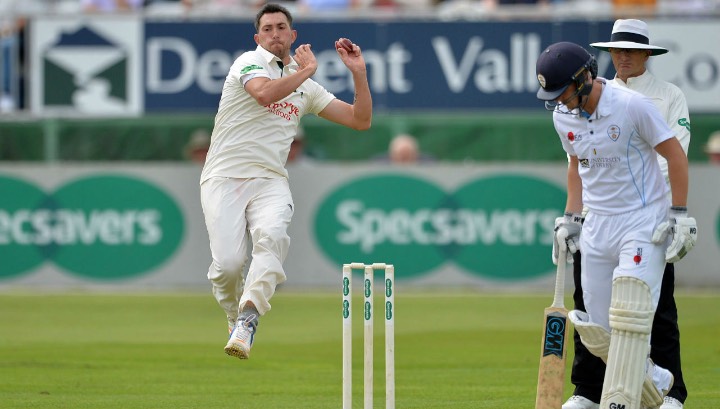 But Wyatt fell for 19, bowled by Ollie Westbury and, after tea, Gibson was caught and bowled by the same bowler.

And although Notts continued to add runs at a lively rate, the end of the innings came fairly swiftly as Liam Patterson-White (14) was castled by Twohig and Kamau Leverock (12) was caught at point by Pennington off Westbury, having struck two sixes.

Tom Keast was then caught at mid-on by Blackledge off Twohig without scoring, while last man Saad Ashraf (6) was taken by Westbury off Steve Magoffin, leaving Lyndon James unbeaten on 43

With 19 overs left in the day, a sign of things to come saw William Wade trapped lbw by Wood without scoring.

Wood struck again when he had skipper Westbury (2) caught by Chris Gibson at third slip and the Worksop-bred bowler then bowled Ryan Gibson and Twohig in successive balls, both for ducks, to leave Worcestershire stunned.

At the other end, Footitt had Pennington (1) caught by keeper Keast before he bowled Richardson (4) and Blackledge (0), making the score 26-7.

The experienced Steve Magoffin (1 not out) joined Josh Dell (16 not out) to survive until the close, but it could not disguise the day’s total domination by Notts.